There’s something serious going on in the world now: thousands of people are fleeing war and persecution in countries such as Syria, Afghanistan and Eritrea, seeking asylum in Europe. (You can read more about this crisis here.)

As the descendant of immigrants who were themselves refugees from Eastern Europe, the idea of an entire population fleeing for their lives to anywhere that will have them is something that saddens me. (I know from some of your questions that many of you feel the same.) So when the GrokNation staff suggested that I write about the international crisis of refugees, I didn’t really know what to say or how to grok it. Similar to my feelings on Iran and oftentimes on Israel, it’s sometimes unclear where to start. Or where to end. But it’s important to try.

Here are some beginnings.

War and peace. War is the problem. Civilians are being displaced because of war. The 1967 political pro-peace button (from Another Mother for Peace) which read, “War is not healthy for children and other living things” is as true today as it was 50 years ago. I know people will say war is inevitable and there are reasons for war, but you know what? I hope to see the day when it all stops, and we don’t use war. You may say I’m a dreamer, but I’m not the only one.

The role of regional and world politics. Politics is the problem, but mainly it’s war that’s the problem. (See above.) I’m sorry if that sounds simplistic, but it’s also true. 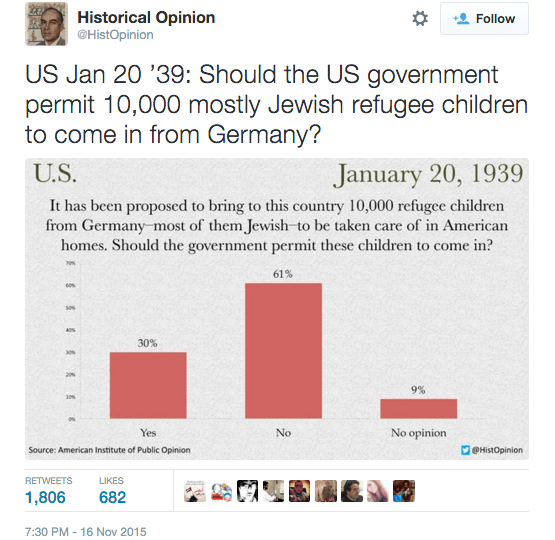 Poll from US Jan 20 ’39: Should the US government permit 10,000 mostly Jewish refugee children to come in from Germany? pic.twitter.com/5cFs5RabQn

Despair and Denial. The refugee crisis saddens me in a way I fear I won’t escape from. I feel like I could read story after story and get really lost in it – maybe that’s why I (and so many other people) sometimes avoid it. Because it’s so sad, it’s such a political mess, it’s the saddest, worst thing to imagine. I wonder what it’s like to live as a refugee, and how mothers and fathers comfort their children, and how people are supposed to have normal lives or relationships after what they have seen and experienced. It’s horrible. It’s tragic. And it feels like there’s very little any of us here can do towards solving this problem.

The Holocaust. I know it’s not always helpful to talk about the Holocaust because it is such an emotion-laden subject, and it is not always helpful to compare the attempt at global genocide of the Jewish ethnicity (which was the Holocaust) with civil wars which lead to genocide – but Jews were refugees. During the Holocaust, while some countries took in a limited number of Jewish refugees (you can read more in this article from the U.S. Holocaust Memorial Museum), many more were turned away, told that there was no room, or that it wasn’t the U.S.’s responsibility to grant them asylum. The MS St. Louis, an oceanliner with 908 Jewish refugees bound for Cuba, was denied access to Cuba, then the U.S. and then Canada, before being sent back to Europe and arriving in Antwerp, Belgium; many of the people on those boats were killed by the Nazis. In the late 1980s, Jewish refugees from the former Soviet Union (Russia and Ukraine) were rescued through Operation Exodus; many of them have settled in the city I now live in. I have friends today who – just 40 and 30 years ago – were Jewish refugees from Iran. Throughout the decades, countries didn’t want the Jews, we had to flee, we were always strangers. As a Jewish person, how can I say that anyone should turn these refugees away?

Wallets and Borders. I once heard Carlos Santana open for Bob Dylan at the Hollywood Bowl. Before one of his songs, he said he longs to see a world with no wallets and no borders. At the time, I was a pipsqueak 18-year-old with an eye for preppy fashion and no understanding of the bigger issues of the world, honestly. “Huh? No wallets?” I thought. “Is he nuts? No borders? Why, it would be mayhem!” Now that I am a 39-year–old, socially conservative but bleeding heart liberal mom of two children who I hope will make the world a better place, I get it. What is money anyway? It’s currency, it’s the way we do things. But the value of currency is something we concocted. It’s not real like minerals in the earth are real. It’s not real like gravity is real. And what about borders? They are lines we draw to keep us in and other people out. They are arbitrary. It’s about who fought what war when and conquered who and made maps to show it. They are ways to regulate people moving about and I understand that countries only have so many resources, I really do. But we need to figure this out.

That’s what it feels like to me. We need to do something. Help people. Save them. Ensure that those children do not have to witness any more of what they are witnessing.

I don’t know how to do it. That’s not my job. But this world has some of the brightest and most creative minds the world has ever seen. HIAS, the Hebrew Immigrant Aid Society, is doing substantial work with immigration and refugees from Syria and all over the world. (You can check out their “how to help” page here.) There has to be something more we can do.

We’ve included some of the latest stories about the refugee crisis below. How can we figure this out?

The Islamic State wants you to hate refugees (Washington Post)

Read More From Mayim
Explore These Topics: Immigration Refugees
More Like This: