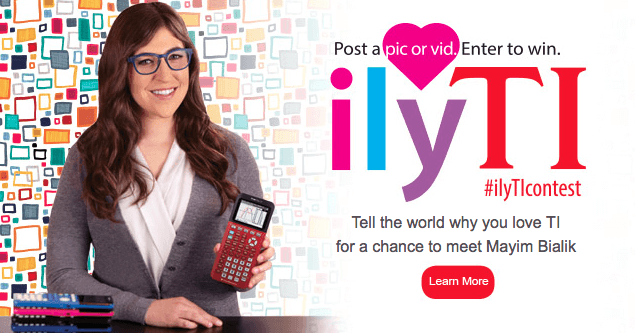 Your chance to win a classroom visit from Mayim – contest ends tonight!

You don’t need to be a mathematician to know there is gender disparity when it comes to Science, Technology, Engineering and Math (STEM) education and opportunity in this country. Despite the continued progress of women in the STEM world, there remains a notable absence of females in math and science professions.

As a young student, I didn’t have a natural affinity for math or science; I assumed that, because those subjects were hard for me, I simply wasn’t cut out for a life as a scientist. That’s how difficulty was interpreted when I was in school: if something was hard for a student, it must be that they are not cut out for it.

I remember my freshman year of high school. I was 15 years old and working on “Blossom,” assuming that when I went to college I will be an English major like my parents or – alas! – an actor for all eternity. It was that year on the “Blossom” set, however, a biology student at UCLA was hired to tutor me. She changed my life. She was the first female role model in science that I ever had and she was literally the person who showed me that I could be a scientist. She taught me science the way I needed to be taught science, recognizing that not every student learns the same way. She talked to me about careers in science and told me her dreams of being a dental surgeon and all about the first-generation American women in her family who were all doctors and dentists. This was a role model if ever I had seen one.

Part of the difficulty of getting girls interested in STEM is the common misconception that it’s reserved for boys. But it isn’t just men and boys who fuel the stereotype that women are not as adept at these subjects. Deep-rooted societal stereotypes suggest that girls, math and science don’t mix. Until I met my tutor, I had been certain that this was true for me too.

After “Blossom” ended, I went on to pursue a BS in Neuroscience at UCLA and continued on to get my PhD in Neuroscience from UCLA as well. My tutor was right to believe in me and I am forever grateful to her. She gave me the skill set and the confidence to believe I could do it despite how late to the STEM game I was and how challenging it was throughout college and graduate school to keep up with the students for whom STEM came naturally.

Thankfully, education has started to understand more and more that every student learns differently and there may be students who don’t have a natural inclination to subjects because they need the information presented in a different way. Thank goodness this is becoming more and more recognized in today’s schools. It will benefit so many students and our educational system on the whole!

Girls like me shouldn’t have to wait until high school to meet a female role model in the sciences, but how do we reverse the disparity in education and opportunity?  That’s sort of the million-dollar question. And it’s one that, as an actress playing a neurobiologist on TV, I am thrilled to have the opportunity to speak about.

In my work with Texas Instruments calculators for the past four years, I have traveled to classrooms around the country as a role model for students, especially girls, inspiring them to pursue careers in the exciting and fulfilling STEM arena. We should be exposing female students to strong female STEM role models as early as possible. Female students need to know being a scientist doesn’t necessarily mean being stuck alone in a lab in a white coat and being a mathematician doesn’t mean one has to crunch numbers on a calculator for the rest of their lives. From a young age, we must show young women, the varied and creatively driven fascinating career opportunities available to them in science, math, and engineering.  A strong STEM education is important not only because the fastest growing jobs require a math and science background, but because the training puts students on a path to solid employment and job security.

To see what I am doing this fall with TI, check out our “ilyTI” back-to-school contest (which ends tonight at 11:59 PM CDT, so submit while you can!! Rules are available here…). We are asking students to show how they love their TI calculators. The most creative video submission wins a classroom visit from me! Check it out: www.ilyTIcontest.com.

I love the advocacy I get to do for STEM. I love inspiring young women and men to learn to love STEM, and I am honored that I get to be an ambassador of sorts for the love of STEM that has transformed the way I live!

(And thanks to our friends at SheKnows, for helping to spread this message further.)