You may remember the state of Missouri from its famous city, Ferguson, which played a monumental role in the Black Lives Matter movement. Ferguson, located in North St. Louis, is where Officer Darren Wilson shot and killed Michael Brown. Since Ferguson, St. Louis has become equated with the terms racism, inequality, and police brutality. And last month, Missouri set yet another precedent: the state now holds the record for one the longest filibusters in the Senate. Clocking in at 39 hours, the filibuster happened as Democrats fiercely fought Republicans over a “religious freedom” bill. The reason that “religious freedom” is in quotes here is because, for me as a gay voter in Missouri, it is not a freedom at all. Rather, it’s a restriction on my fundamental human rights.

The religious freedom bill basically says that if a business wants to deny service to me because of my sexuality, then they can. They can simply say it goes against their religious beliefs. Bob Onder, the prominent Republican sponsor of this bill, claims this is not about discriminating, but about religious liberty: that it “protects churches, pastors, religious organizations in a very well-defined class of individuals from being penalized, targeted, persecuted on the basis of their religious beliefs.” In other words, it restores liberty for those who are being persecuted for holding homophobic views. Ha. Liberty. Sure, Bob, good joke there. This bill justifies homophobia. In present-day America, many people are still against the concept of divorce for their own religious reasons, but those people are not legally permitted to impose their beliefs on other citizens, denying them the right to a divorce. So why should any Republican be able to enact a law that is primarily built on his religious beliefs? America is supposed to be a secular country.

When this filibuster occurred, I was home from college for spring break. Because I live in a very liberal St. Louis suburb, I had no idea of the filibuster occurring in my state, not until checking multiple national news apps on my phone. My first response to seeing “Missouri” and “Religious Freedom Bill” was “Oh god…”; unfortunately, this is something I did see coming. Historically speaking, Missouri is a conservative, Republican-dominated state. In my more liberal part of St. Louis, I have a solid group of fellow, young-millennial, gay friends who are freshly 18 or who will turn 18 in the months before the 2016 election. They were just as appalled by the bill as I was.

If this bill becomes a law, any service provider will have the right to deny service to someone who is LGBTQ. Service providers will be permitted to ask them to leave their establishment solely because they are LGBTQ.  For me, the Missouri law would mean that I would fear publicly expressing my sexuality because of discrimination. Basically, this law would allow any tax-payer funded establishment the option to not serve LGBTQ people because they don’t believe in same-sex marriage. This bill specifically applies to same-sex marriage, but it would open the door to general LGBTQ discrimination. Gradually, it would chip away at everything the LGBTQ community has worked for. Bob Onder claims that “it is a shield, not a sword,” but for same-sex couples it’s like a dagger in the heart. Our “equality” would be gone. Again, I use quotes there because, as a community, we still don’t have equality, but we are getting closer and closer. This bill would take us a giant step back. (And South Carolina and Mississippi are trying to enact similar bills.)

I did some research on Onder, and grew more and more irate. He is what many people consider to be a stereotypical Republican archetype: pro-guns, anti-abortion, homophobic. I’m a firm believer that everyone is entitled to his or her own beliefs, regardless of my feelings on them. Saying that though, I also believe that engaging in dialogue and productively conversing about opinions, even when you disagree with them, are important. And that’s exactly what I tried to do with Bob Onder.

As a millennial, I communicate with others, even adults, primarily via social media. I use emails for professional purposes and while there is still a time and place for letters, I knew if I wrote Bob Onder a letter it would be thrown aside and never read. I did not want that; I wanted to know for certain if and when he read my message. So, l found his personal Facebook profile. For a politician, his security settings are surprisingly low and he accepts messages from everyone. That gave me a little bit of hope. If his settings are so low he must be open to a dialogue, right? I spent hours forming a coherent, rational and unemotional letter to send to him via Facebook Messenger:

First and foremost, hello. I hope the day is treating you well. My name is Erica Snyder, and I’m writing in regards to the current filibuster. Chances are slim you will see and read this, but I go to a university that encourages me to be a politically engaged citizen. Thus, I felt the need to send you a letter, or rather the 21st century version of that which is a Facebook message.

As an 18-year-old, being politically aware is a new concept to me. My vote never mattered – until now. When I heard about the Missouri filibuster regarding LGBT rights, I, at first, was appalled. I identify as a lesbian and the thought that white, cis men, who have no understanding of what being “not straight” in this country means, can take away my rights disturbed me. But rather than being angered like my peers, I desperately want to understand your perspective. With this bill, you are claiming religious freedom, which I do understand. But how can you cite “religious freedom” for LGBT rights but not for divorce? My question to you is when does “religious freedom” as an excuse become hypocritical?  How can we use “religious freedom” for certain issues but not for others?

You have your beliefs and I have mine, but the only way we can progress as a country is to have an understanding of the other side. I would love to have a conversation about this and understand your perspective. Feel free to Facebook message me, email me, or give me a call. If you took time the time to read this, I greatly appreciate it.

A few days ago I finally had the courage to check if he read the message, as I never received a response; Facebook showed it had been read. Since then, the read notification has disappeared, signifying Onder either marked the message “unread “or deleted the conversation in its entirety. Onder could have marked the message as unread while working to formulate a response, but due to the fact it was read at the beginning of March, it’s fair to say he probably does not plan on responding. But, I am not dissuaded or upset in any way: I shared my beliefs, and the other side heard them. Right now, it’s ok if the other side does not want to engage in a conversation; that says a lot more about them than me. (This occurred even before the Gaycation episode where Ellen Page approaches Ted Cruz aired, but my objective with approaching Onder was the same as Page’s with Cruz: developing an understanding of his perspective, or perhaps, making him understand mine.)

But what I did learn, which many other young voters need to realize, is they can make their opinions heard. It does not matter in what capacity, but it is necessary to express your opinion. We are a society built on democracy and differing opinions — don’t let the straight, white man win! And I say that with utmost the amount of respect and in good humor. Go to political rallies, even if you don’t support that candidate, and create a dialogue. Without compromise, our country would be nothing. You – we —  are the future. 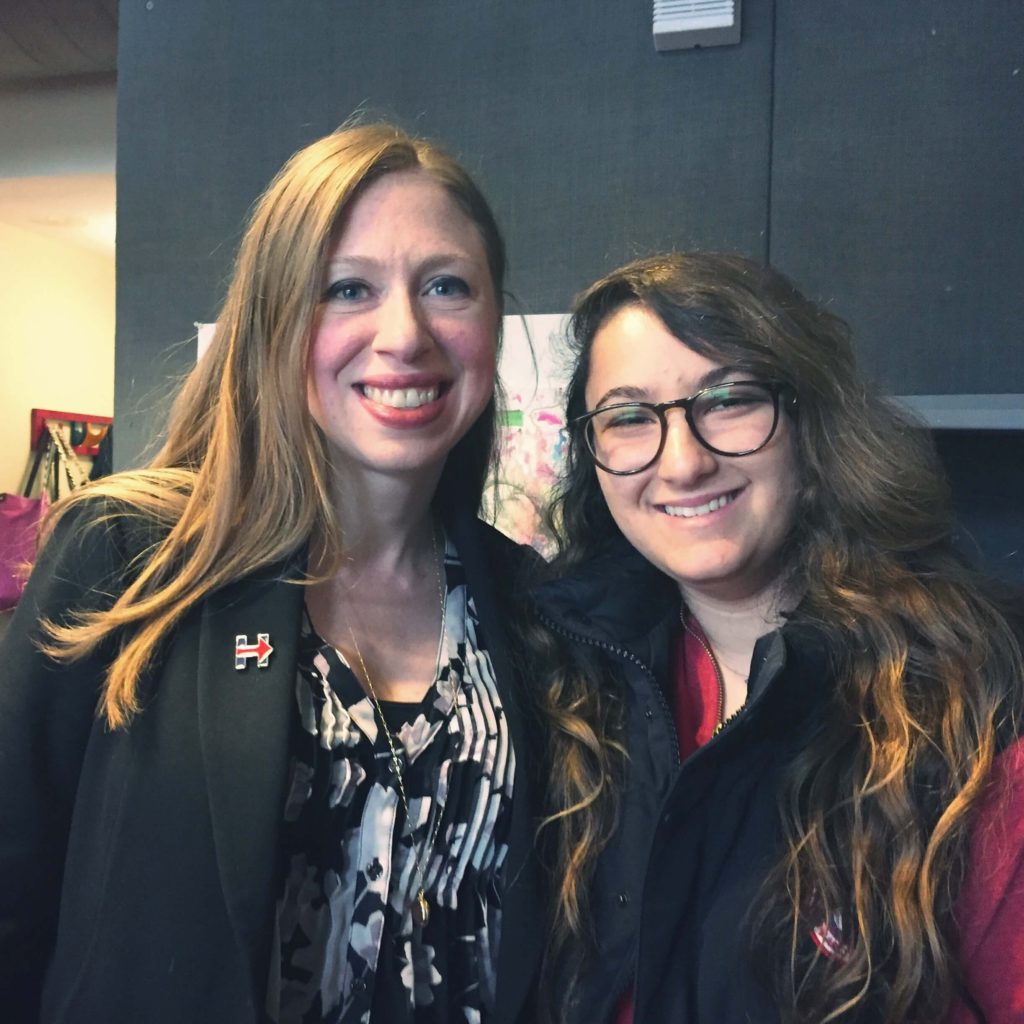 Erica Snyder (right) attended a Chelsea Clinton (left) event, which took place .3 miles from her house right after this filibuster took action. While, she notes, she is unsure of her political stance (regarding this particular event), she is glad to play a small part in the political process.

Bio: Erica is an aspiring screenwriter studying at Wesleyan University. In her spare time, she discusses LGBTQ rights and writes plays. You know, what all the kids do these days.