Martin Luther King, Jr. Day is always a very powerful day for me. I have long felt connected to the struggle of black people through my identity as a Jew and our shared history of oppression, struggle for freedom, and desire for autonomy in a land we did not know.

My parents marched and protested and held sit-ins to allow black students into the New York City public school systems at a time when they were also being told by some blacks that white Jews had no place in the civil rights movement. The suffering of black people at the hands of white people was not a topic my parents shied away from, and it is not one I avoid discussing with my own children. In fact, I named my second son for the Rabbi who marched alongside Dr. King; he bears the middle name “Heschel” to celebrate the unity of blacks and Jews, which is a symbol of hope and inspiration for peace.

Martin Luther King, Jr. Day is a day when we honor the memory of a man who was a crusader for the rights of black people and a warrior for the humanity that we are challenged to bring into a broken world. Dr. King’s “I Have a Dream” speech remains for me one of the most moving, articulate, impassioned and significant speeches in history. I listen to it every MLK, Jr. Day. 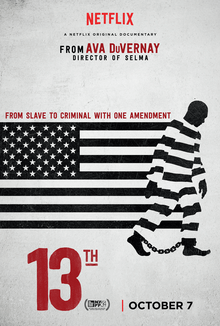 I recently watched 13th, an Oscar-nominated documentary which came out in 2016. It was made by Ava DuVernay, a filmmaker who was raised in Compton, California. She grew up fearing the police and has spent her life trying to understand race. She made Selma, a movie about Dr. King. And then she made this unbelievable documentary about the legacy of the Thirteenth Amendment, which abolished slavery and involuntary servitude, except as a punishment for crime.

This documentary solidified my desire to move forward the treatment of blacks and increase the awareness of the status of black men in prison, in particular. It seems that what would help everyone else become more aware of the challenge of racism is to watch this documentary.

But I can’t make everyone watch a documentary. I can’t pay everyone to watch it, although it occurred to me after I watched 13th that I wish I could.

I could tell you about the impressive and dignified professors and sociologists who share their wisdom in this film.

I could tell you about the passion of Cory Booker and Van Jones and Angela Davis, and the way you can see their hearts break when they speak about the ways our lives have been touched by the 13th Amendment.

I could tell you about the music and the cinematography.

I could tell you about the clarity with which the narrative is told.

And I could tell you that although the Thirteenth Amendment of the United States abolished slavery, it still allows a denial of rights to prisoners the same way slavery did; I could tell you how the prison system has become a factory of labor and a holding pen for human beings being treated like animals.

But none of it feels like it would matter. Because me telling you that after slavery ended, black men were arrested and turned into a labor force may not make sense to you unless you see the documentary.

And me telling you that I believe as deeply as I believe anything else that all of the riots we have seen for the past 60 years are ALL THE SAME won’t really matter you unless you see it.

I want you to understand. I want you to be outraged and to feel as frustrated and enraged and impassioned as I do right now. I do not want a prison system making money off of prisoners and keeping men in prison as a labor force. No.

Black men are 6.5% of the US population and over 40% of the prison system. You may think it’s because there is something wrong with them. Some people say that black people have weak family values. That black people “can’t” do this or that or rise up or ‘get over’ slavery. I know what people say. And I feel like I have never understood as well as I do now why that is all wrong.

And so, I plead with you: watch 13th. And prepare to open your mind and your heart. And prepare to feel shaken up. And angry. And sad. And possibly enraged and frustrated and incensed and disturbed.

And I hope that you will use those feelings to do what only you can do: rise up. Do not stand for racism. Do not explain away shootings and do not blame people’s lives on the color of their skin. Prepare yourself to see the history of black oppression as one long chain that has yet to be broken. And as outraged as you think you would be at segregated water fountains and restaurant counters, know in your heart that as far as we have come, we are still in it. We have not fixed this.

And yes: shame on us.

And on this day when we honor the Reverend Dr. Martin Luther King, Jr., do something to advance your understanding of race in America. Please see 13th, and Selma. Read The New Jim Crow: Mass Incarceration in the Age of Colorblindness, by Michelle Alexander, which shockingly, the New Jersey prison system has just banned (the ACLU is fighting it). And check out the other GrokNation articles I and others have written over the past two years about racism in this country (see links below).

And find out what you can do to be an ally for all lives. For the dignity and the safety of the people of the United States of America, I implore you.

How You Can Help Combat White Supremacy, Racism & Anti-Semitism

Talking With Melvin About Race In America