It’s no secret that education is a problem in our state—budgets have continually been cut for years, so much so that many school districts went down to four-day school weeks to make ends meet. Oklahoma teachers are paid some of the lowest wages in the nation, and they’re expected to teach with furniture, supplies, and curriculum that is decades old. A 7-year-old in Ada, OK, recently realized she’s using the same reading book that Blake Shelton used … in 1982!

So, yes, there is an education problem in this state, but I wasn’t always aware of the depth of it.

I started teaching in 2007 with the hopes of teaching Physical Education. Through high school I worked at daycares and basketball camps and learned that I was good at teaching—good at explaining, good at modifying my explanations when they weren’t getting it, good at modeling.

After getting my foot in the door at a decent school district through teaching junior high math for a year, I began as a Physical Education teacher at a brand new elementary school. The school did not provide a single piece of equipment. I was given a $25 credit to spend at a local teacher supply store–the same amount that every teacher, regardless of subject, received. I was an eager new teacher and just shrugged it off—I accepted it as part of the job. I bought a couple jump ropes and balls, and we played a LOT of tag in the first few weeks. Luckily, I was in a school district with a supportive PTA and the parents helped raise money that was matched by MidFirst Bank to provide more equipment. Many teachers have to launch DonorsChoose.org campaigns.

After teaching PE for three years, I moved and began teaching computer courses since there were no PE positions available. And last year I moved into a new classroom, which didn’t have basic furniture, like a chair for my desk or a bookshelf. I had to search the school to find ones that weren’t already in use (or falling apart). I didn’t even think about how this should be frustrating.

This year I’m teaching a new health course, and I asked my administrator if there were textbooks or a curriculum. There were not. Did I complain? No—because that’s just the way it is here. In fact, I might have been more surprised if he told me otherwise.

After 10 years of teaching, I laugh every September when our new paychecks for the school year begin: The step increase usually amounts to about $20 per paycheck… and that’s not taking into consideration increased insurance coverage or retirement. 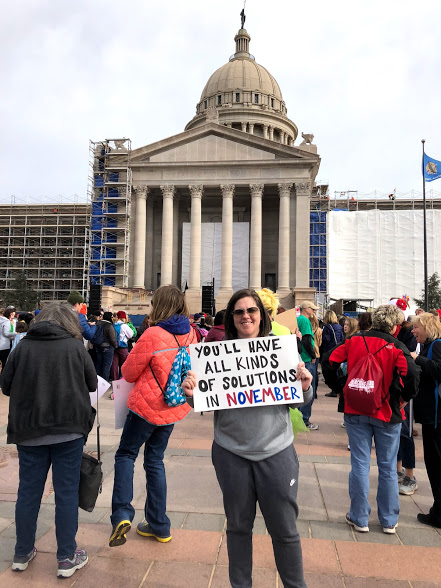 Amanda marched on the Capitol on Thursday, April 5, 2018.

Oklahoma teachers haven’t had a raise in a decade, so I’ve not experienced one in my career—but it’s not like I chose this career for the money. My own elementary school PE teacher really left a mark on me. She was fun, passionate, and engaging, and I wanted to be just like her. Through PE programs, I knew I would be able to inspire children to live healthier lifestyles, which is also something we desperately need in Oklahoma!

When I decided to pursue a career in teaching, I was warned over and over again about the low salary. I thought, okay, so I won’t be able to drive an Audi or live in a 5,000-square-foot home. But when you’re deciding on a career at 18 years old, you don’t exactly understand how much a dollar buys. You don’t understand that living on a teacher’s salary—which starts at $31,600 in Oklahoma—means sometimes you have to get creative at the end of the month by determining which bills can wait until payday, which dinners you can make with nearly nothing in your pantry, or what items in your house could be sold on Craigslist for a few bucks.

Unlike me, though, many teachers choose to stop being “creative” and leave the state for a higher paying job: Oklahoma’s 2016 Teacher of the Year famously left the state for Texas. And some leave the profession altogether.

I met my wife when we were teaching at the same school. She had a 3-year-old daughter, and as a single parent qualified for welfare on a teacher’s salary. You read that correctly: She was a college-educated, working professional who made so little she qualified for welfare.  After three years of teaching, she went back to school and changed careers. Although I’m biased, I can say with certainty that we lost a good one. 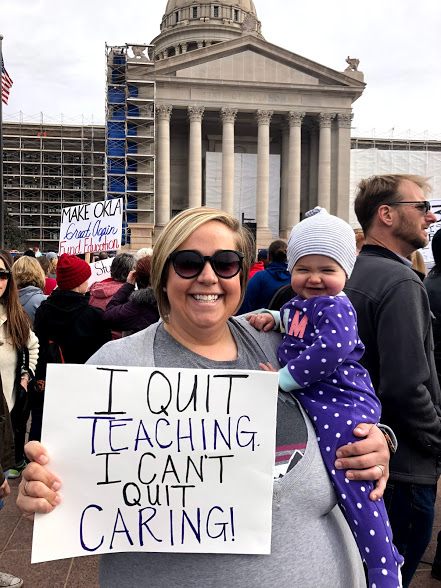 Amanda’s wife, Emily, a former teacher, marches on the Capitol with their daughter, Oakley.

And my wife is only one of them. There are countless others who we have lost to other careers, other states—and there’s no way to quantify the number of potential amazing teachers that never even gave the profession a chance simply because of the money. I hated to see my wife leave a profession that needed her, but if she hadn’t made that choice, our family would still be getting “creative” at the end of each month.

Now in all fairness, I can’t claim to be a champion of this movement. In the past week, I went to the Capitol for one day, whereas many of my colleagues have been there every day. To be honest, I was reluctant to go because I have such little faith our protest could push our legislators to make significant change. However, each day I felt more internal pull to be a part of the action.

I loaded up the whole family, and we took a trip to Oklahoma City. I won’t ever forget the sight of my 11-year-old daughter, alongside students of all ages, engaging in political activism for her own education. To have my 1-year-old daughter there to unknowingly be a part of the change that will pay dividends in her future is something I can’t quantify. To have my wife there, not only as a former teacher but as my biggest supporter, is something I didn’t even know I needed until we were there. 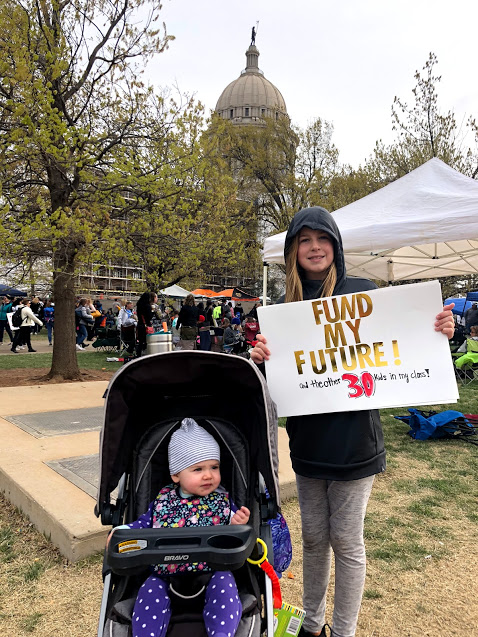 Amanda’s daughters, Oakley and Ellie, marching at the Capitol.

My family was inspiring, but rallying with hundreds of fellow teachers brought about a feeling that’s hard to describe. The sheer number of people was inspiring—but being around that many people all rallied for the same cause made me so glad I decided to make the trip.

(Of course, many of the signs were worth the trip alone. My favorite was from a high school student that said: “I would quote a book but we can’t afford them!”)

Unfortunately, we weren’t there long enough to wait the hours it requires to make it inside the Capitol to speak to legislators. I commend those who are there doing that every day, but I feel there are other ways I can be a part of this movement. I can educate the people around me who don’t quite understand what this is all about. I can help my school district feed the 4,500 children who depend on school meals by volunteering and donating food in partnership with the Jenks Community Food Bank. Most importantly for me, I can reshape the way I think about education funding. I can take those blinders off and never be nonchalant about the lack of supplies, broken furniture, and non-existent curriculum.

The lack of funding for education is like being in a bad relationship: It’s been going on so long that I thought I didn’t deserve better; society blames me and I blame myself because I choose to be in this situation; and the imbalance of power is so strong that it feels hopeless. Oklahoma teachers simply want to change that.