“Mama, what are you talking about?” I was reading the news out loud as it unfolded in Charlottesville. One of my greatest fears about Trump being elected came to the fore this weekend.

I began to explain to my almost 9- and almost 12-year-old sons what was going on as best as I could.

We talked about the statue of General Robert E. Lee. We discussed why statues of Confederate soldiers are being taken down. We debated the pros and cons of those actions.

We talked about angry white men marching. And how it is their right to march.

I got to explain to my children what the Ku Klux Klan is: the robes, the horses, the torches; I could not bring myself to describe lynchings. So I made it clear that the KKK killed people in horrible ways.

“Mama, is there still a KKK?” Yes, love. They still exist.

I told my sons about the hatred these people have for Jews. And for blacks. And for progress.

I felt like I was punched in the gut when I read David Duke’s comments to Trump. “I would recommend you take a good look in the mirror & remember it was White Americans who put you in the presidency, not radical leftists.” Ouch.

I had to explain to my children why “Marxism” is likely a euphemism for “Jews” and I told them about the history of equating liberals with Jews and how in the 1920s it became the most dangerous equation of all. 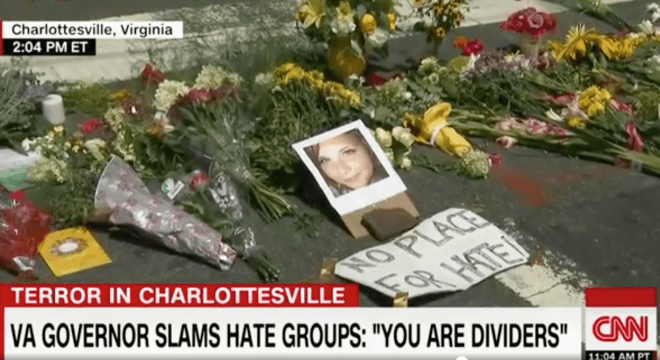 And so now what? A woman died. A car plowed into pedestrians, sending dozens to the hospital. Several remain in critical care. My outrage doesn’t help. My sense of shame doesn’t go far.

I can not believe this is happening. I know what the Trump supporters say about us. That we are whiny liberals who can’t stand that Hillary lost.

Well, turns out our paranoia was not unfounded. At least not in this case.

I didn’t want Trump for so many reasons.

Say her name out loud.

Charlottesville, I am so sorry.

Read More From Mayim
Explore These Topics: Children Tragedy
More Like This: