The first time I learned about Martin Luther King Jr., I was in second grade in Connecticut. It was 1993. I was an avidly curious kid as well a bookworm. I loved learning about all sorts of things, especially people. When I heard the “I Have a Dream” speech, crackling and popping over the speakers of my parents’ vinyl record player, I was in such immense awe from the energy of change that the words being spoken carried. I was eager to learn everything I could about the civil rights movement. Even at a young age, I was blown away when I learned that Black people were once so hated in this country that they were categorized as inferior and were segregated.

I even memorized parts of King’s speech, which I brought to school in anticipation of reciting for my classmates. I imagined they would be just as excited as I was. After all, Dr. King was such an important historical figure and was the catalyst for the chain of events that allowed me to even be in the same environment as this all-white student body.

When I got to school I asked my teacher if there was time for me to present this homage to Dr. King. She certainly didn’t discourage me, but in retrospect I imagine her appreciation of this historic speech wasn’t as strong as mine. Regardless, she gave me permission to present my speech at the end of the day. 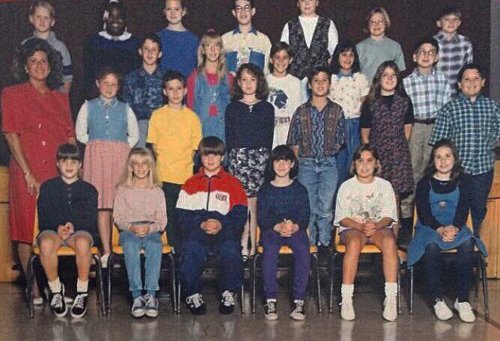 The author and her elementary school class

When you’re a kid, especially one eager to do something, minutes seem like hours and that day seemed to last forever. But soon my patience paid off, and, finally, it was my time to shine.

As I walked up to the front of the room beaming with pride, I was suddenly interrupted by an an announcement over the school intercom system. The busses had arrived. However, this did not deter me, and I started to recite an excerpt from the speech.

But before I could continue, my words were being muffled by rustling bags and exiting students. I kept going. But it was clear that my fellow classmates didn’t care about Martin Luther King Jr., at least not in the way that I did. It felt extremely defeating to stand up there as a little Black girl in this white classroom and be unheard.

At times, I still feel unheard. Although this speech resonated to me as a powerful testament to the hope surrounding race relations when I was a kid, today it, at times, feels like a sad reflection of MLK’s legacy. When King gave his speech in 1963, he was fighting for civil and economic rights for Black people. It was 55 years ago when he got up in front of a crowd of 250,000 people and peaceful protesters at the Lincoln Memorial. Today, we are still fighting for equity. While some progress has been made since this speech was first given, the fight looks a lot different now.

As a Black femme, I am in this fight. And like Dr. King, I also have a dream.

I have a dream that we can all come together in an intersectional way to fight for the country that Dr. King once thought could overcome great racial inequity.

I have a dream that there is social justice free of white fragility, and that white people who define themselves as allies will one day truly understand the difference between intention and impact, as well as recognize the microaggressions they may partake in.

I have a dream that children of color will have their creativity and educational needs nurtured while being taught culturally competent material that isn’t only catered and customized for white students. And that Martin Luther King Jr. will be one of many Black historical figures instead of only being seen in lesson plans around Black History Month.

I have a dream that Black bodies will be humanized by all, and stop being viewed through a lens of fear, anger, and prejudice. I want Black people to be able to barbecue in a park, study in their dorms, or even be able to just breathe without people calling the police.

I dream that the joy and resilience that Black people possess can be embraced and appreciated universally instead of continuously being commodified and appropriated for capitalistic gain.

I have a dream that people from all walks of life recognize that white supremacy is the strongest enemy amongst us.

And beyond a dream, I have hope. I know that the path to this fantasy is always evolving. I see the future in the youth of today who are vocal on social media about the need for change and why they will not tolerate discrimination. In the same way Dr. King was committed to nonviolent protests, I think the only way to lead this movement is with love.

Prior to when he had a dream, Dr. King once said, “Hate for hate only intensifies the existence of hate and evil in the universe. . . . The strong person is the person who can cut off the chain of hate, the chain of evil. . . . and inject within the very structure of the universe that strong and powerful element of love.”

And though it can feel like love has been abandoned while the rights of marginalized people continue to be stripped away, we must show compassion toward those who need it most.