Several years ago, I entered teacher’s college full of hope, dreams and a burning desire to help teenagers discover their inner mathematicians. I walked into the head of the math department’s office, excited to change the world. The first words that came out of his mouth? “What’s a pretty girl like you doing being a math teacher?”

That actually happened. The months that followed in the classroom shocked me. While the girls I taught in this co-ed school would score 90s on their tests, for the most part they still claimed to be bad at math. I left shortly after and headed back to university to study math education and feminist studies, determined to figure out what was going on.

My adventure led me many places, but to me, the most interesting was the exploration of the influence of media messaging on the self-confidence and aspirations of young girls.

Despite the fact that females in high school tend to score higher in math and science classes than their male peers do, the percentage of women who ultimately choose to enter STEM fields (Science, Technology, Engineering and Math) is disproportionately low. The most common suggestions for how to fix this ratio involve identifying more female role models, making math and science interesting for girls, and a variety of ways to engage women.

And then there are the movies that insist that in order to be accepted, that girls need to hide their smarts completely. The classic ‘makeover movie’ usually involves the smart girl who can’t fit in socially: only after shedding her glasses and replacing her smarts with sass, does she become the popular girl she always wished she was.  For example, in Mean Girls, Lindsay Lohan’s Cady Herron hid her math savvy completely in order to fit in with the cool girls, just like every other nerdy girl in every other classic teen flick. What kid grows up aspiring to be the one who needs a makeover to fit in?!

The fact is, you can’t be what you can’t see. If we aren’t given the opportunity to see diverse, cool, fun, interesting people who simultaneously enjoy math and science, we truly begin to believe that being one of those people isn’t plausible, that those people don’t and can’t exist, that it’s not even an option.

While times are changing, they’re not changing at the rate they should be. But the good news is that we have the power to do something about it. Among the Instagram celebs that teach girls that their worth is in their unrealistically altered photos and the Kylie Jenners of the world who teach women that their happiness lies in perfectly pouting lips, there are fragments of hope hidden. The first mega fragment of hope? Believe it or not: Barbie.

The creators of Barbie, the doll with unrealistic proportions often blamed for the dysmorphic ideals of young girls over recent decades, have been petitioned and scorned for their promotion of unrealistic beauty standards specifically targeted to young girls. Oh, and do we all remember the Barbie doll that proclaimed “math class is tough” back in the 80s? For years, Mattel hadn’t cared and refused to change its promoted values and ideals. The goal of any corporation is to make money, and if that dollar needs to be earned at the expense of others’ well-being and mental health, so be it. But wait – something has happened – and it’s all because of us. After years of consumers pleading, begging, threatening, and lobbying – Barbie caved. In this consumer’s market, if enough people demand, Mattel must supply.

The new Barbie ad campaign came out in late 2015 and our wishes have come true – intelligence and education are actually being celebrated! The ad features young girls enacting their career aspirations with the help of their dolls; while this might seem like just a commercial, it’s way more than that.  Hundreds of thousands of girls own at least one Barbie doll. The idea that kids can start gaining positive messaging from their fashion-clad dolls is a huge step, but there’s something more important than even that: the proof that we can make a difference in fighting huge corporations responsible for influencing our children. WE are the reason that Mattel finally made this commercial, changed their core values, took this stance. If we can make Barbie smart, what ELSE can we do!?

How WE Can Change The Game: Turning Stereotypes Into Opportunities

1. Stand against casual sexism. Studies have shown that parents’ and teachers’ attitude towards math have a huge effect on the way kids feel about math – and that goes for gendered beliefs! Stay away from making cracks about how women are bad at math, and if you hear this type of humor, make a point not to laugh and instead point out how harmful gendered stereotypes are.

2. Promote beauty & brains with the toys you buy. There are so many cool toys out there that promote STEM to young girls now that Lego almost seems like a thing of the past (as if – Lego is awesome and totally timeless)! Check out Goldiblox  or Roominate – they are SO insanely cool that you’ll want to play with them yourself!

3. Choose summer camps & after-school programs that promote learning. When we think of extra-curriculars, we often go for the popular ones: swimming, hockey, ballet…but there are a ton of ways to engage your child outside of the classroom when it comes to STEM. Search your area for robotics camps, coding workshops, and science classes. Positioning STEM as an extra-curricular helps everyone see science and math as fun instead of simply mandatory.

4. Get smart with your SWAG. Think twice before opting for clothing that broadcasts messages that might imply that you lack intelligence. JC Penny’s “Too pretty to do homework” shirt is one of the many examples of clothing that many girls initially opted for before identifying the message as totally degrading. Forever21 was guilty of the same thing, totally insulting girls with their back-to-school line. Remember, what you wear is an extension of what you believe – so take the time to make sure you’re broadcasting the right message!

5. Movie marathon! Have you ever thought about how crazy it is that in “The Little Mermaid,” Prince Eric is totally in love with Ariel despite the fact that she can’t speak?! Or how insane it is that like, every smart girl needs a makeover in every teen rom-com? Movies are the perfect opportunity to unpack messaging about gender equality and societal sexism. Check out this amazing infograph on the ratio of male vs female dialogue in Disney films as a starting point – ask your kids or friends if they’ve noticed, and why they think that male characters speak so much more than their female counterparts!

These are just a few strategies for debunking STEM stereotyping. If you’ve tried one of them, or have your own, please share in the comments or email me at vanessa@themathguru.ca.  It takes a village to change the game. But we can do it together. 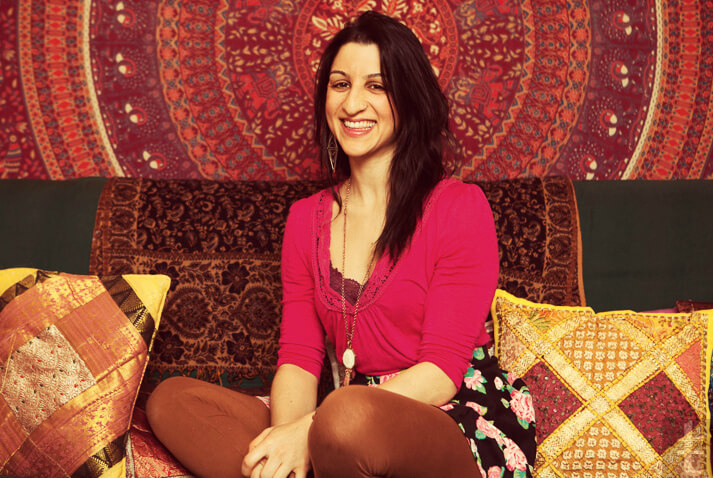 Vanessa Vakharia is the founder and director of The Math Guru, a boutique math & science tutoring studio in Toronto. She has her Bachelor of Commerce, Teaching Degree, and Masters of Math Education. She specializes in teenage engagement in mathematics education, with a focus on encouraging young women to pursue STEM-related fields and reinventing media representations of females as they intersect with math. Mindy Kaling is her idol and Vanessa believes that she should be yours too.