When my mother was a young woman living in New York, it was expected that more often than not, you would likely be “felt up” by a man on the subway during rush hour. As a teenager, she told me this as a cautionary tale about men, and also about the public transportation system of her home state. My mother was grateful that she and my late father z”l (acronym for the Hebrew “zikhrono livrakhah,” may his memory be for a blessing) moved from New York to Los Angeles for many reasons, but when people would ask why they moved, she would say with a bold smile that she was happy she didn’t have to be felt up on the subway anymore.

There are places in the world where women being sexually assaulted this way -and in even more significant ways – happens a lot, and it is disturbing and tragic. It’s happening right now all over the world. And not just on crowded subways; it happens in public view.

There have been recent discussions in feminist circles about how to protect women in these countries from sexual assault and violence. The most logical way is by making these men stop. Unfortunately, we don’t have an easy way or time-sensitive way to do that. There are men who believe that it is their right to assault women. And in many countries, this belief has been reinforced for thousands of years. Some of them act as husbands, or fathers, or brothers, others because their politics, culture or religion positions them as higher-value than women. Some men will report that this is just the way it is – culturally or religiously, in particular – and that there is nothing wrong with it.

And when assault and violence against women is an accepted part of daily life, and women are viewed as property rather than people, it can also lead to murder: for instance, honor killings – which have allegedly happened in Germany, and even in America (see this article in The Atlantic for several stories of men killing their daughters for wanting to be independent or more Western, or for dating American boys. )

Not to sound like a feminist scholar or anything, but we can’t undo thousands of years of patriarchy and women not being respected or treated like more than sexual objects or property simply by lecturing at men. It’s not going to happen.

Another solution to protecting women from this kind of sexual assault that has been proposed is to have women-only train cars and buses in cities where this is becoming more and more of a crisis. Some countries have found this strategy to be more effective than others; for a rundown of which countries have implemented same-sex transportation, check out this list in the Guardian.

Why is separating the genders problematic?

There is no easy answer to this problem because the #1 goal of this conversation is to change the status quo and build a world where men are not free to assault women, do not feel justified in attacking women and are not socially, culturally or religiously entitled to assault women. But protecting women from men during this time before the world changes to become a safe place for all is also the #1 goal.

There is no easy answer, especially on the global level. 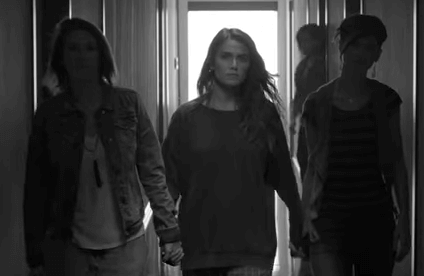 From “Til It Happens to You,” by Lady Gaga. Video written & directed by Catherine Hardwicke. Song from “The Hunting Ground.”

And then there is the domestic front, particularly on college campuses, involving issues of sexual assault and rape, the definition of consent, the victim-shaming, the lack of support on a health services level or on an administrative level for women (and also a few men) who have reported being sexually assaulted or raped. (Editorial director Esther recommends you all watch “The Hunting Ground,” a powerful documentary by Kirby Dick and Amy Ziering about the issue of rape and sexual assault on college campuses, and the powerful music video from Lady Gaga, “Til It Happens to You” – lyrics are here.)

When I read story upon story of college-age young women assaulted amidst drunken fraternity parties, I have an elaborate fantasy, with messages for both men and women. Here it is.

I know it’s a fantasy. But I want to protect girls and women. Because so many other people do not protect them. Because I don’t want them to be hurt. But I don’t want them to be locked up, in an attempt to keep them safe. They need to exist as free beings, to show people: look! We are free! You can’t hurt us. We are free to walk and be in the world.

Do you wonder if my mom wore short skirts when she experienced what she experienced on the subways in New York? Does it matter? Does it matter what sorority girls and the girls who attend fraternity parties wear? Sure, you get more attention in many cultures the more skin you show, but it’s not about that. She – and we – should be free to wear what we want, without fear that men will invade our space and our bodies.

Because in this kind of a world – where men see women as sexual objects; as a piece of ass to torture with cat-calls until they cry; an object to possess or to touch because they want to, regardless of her consent; or to pressure her relentlessly until she stops protesting and men take what they want – we will never be truly safe.

Today, I see a wave of young women who are being encouraged to embrace sexuality in many ways: to be that sexual object, to be sexually available at all times, in any way men want it. Hook up with random dudes via a dating app? Do it. Kiss another girl because a man dares you to? Do it. Go to strip clubs? Do it. Strip for a bunch of guys or have sex with them on video? Do it. You can say it’s not happening or you can say it’s always been happening, but either way, it’s happening – but now amplified by technology, and under the idea of sexual empowerment, which for many, doesn’t feel like empowerment but more like exploitation. The definitions of words like “coercive,” “consent” and “liberated” are getting blurrier.

And in this kind of world, I want to know that our daughters will be protected. So do we lock them up? Do we put more boundaries around them despite the fact that we should not have to bow to the aggression and violence dictated by men?

How do we really change things? How do we shift culture and expectations so that we can move beyond protection and safety to be really and truly free?

I wish I knew.

Grok with us: Have opinions about this? Do you have ideas about how to help people create change around these issues? Let’s grok this out together, to create a world in which men and women live side-by-side, unsegregated, but safe.