I write this four days into a mandatory evacuation from our home in Calabasas due to the danger posed by the Woolsey fire in the San Fernando Valley. My family and I are lucky enough to have a very generous and kind-hearted friend (thank you Michael Warwick!) who has opened his home up to our party of five (plus a dog) indefinitely until the evacuation is lifted.

Let me start by saying that our situation is thankfully more of a nuisance than anything else. Though we are barred from returning home, our residence is still safe. Yet, I’ve partaken in much comfort food since the displacement occurred—which, after years of not eating hamburgers, has included my ordering sliders as appetizers twice in the past three days. All thoughts of sticking to a diet or making healthy choices at each meal somehow evaporated as I pulled out of my driveway with a gigantic plume of smoke visible in the distance.

That first morning as we fled and the slowly unfolding afternoon where the fate of our home seemed to be getting more dire by the moment was tough on our three daughters (ages 8, 11 and 13). Their fears were quickly allayed as I jokingly explained that everything in our house could easily be replaced with shopping excursions to Target, Ikea, The Gap and Pottery Barn. We have insurance, and it’s not like my Faberge egg collection or a safe full of cash was on the chopping block. Even our family photos are easily retrievable in the cloud or on Snapfish and Shutterfly. Soon enough their fear of losing possessions turned to dreams of an insurance-fueled shopping spree and a new home.

I do not mean to make light of the destruction caused by these fires. For my family, the only way we could deal with that scary cloud hanging over our heads in the moment was to let go of our attachments to our stuff and just look forward. We needed to be thankful that we were all safe and sound and maybe even fantasize just a little about the new junk we could acquire to ease our suffering in the possible aftermath. Our initial thoughts were selfish, worrying about how we are affected.

Quickly though the focus does go toward concern for others. How could it not when seeing actual homes destroyed, lives lost and the destruction of some of the most beautiful natural landscapes in Malibu as well as all the wildlife that called the area home? We are the lucky ones, unlike so many not far from us in Bell Canyon, Malibu, parts of Calabasas and the massive areas in Northern California that have been ravaged by these latest wildfires. 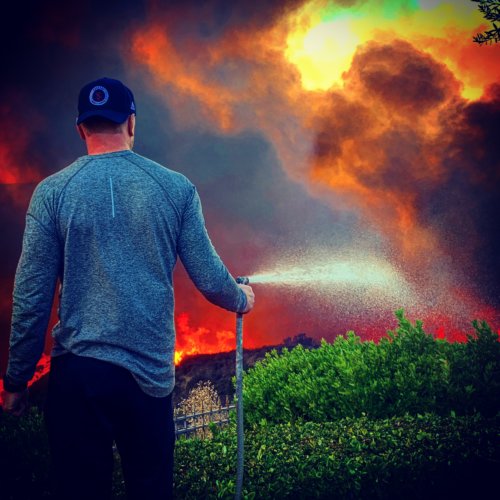 I lived in Manhattan during 9/11 and remember feeling helpless and trapped trying to figure a way to leave the city with my 90 pound border collie in those first few harrowing days. I didn’t have a car at the time and the bridges and tunnels were closed to incoming traffic except for public transportation. Even in a tragedy it seemed no bus or ferry was willing to offer a ride to me with my dog.

Years later, while living in New Jersey with my husband and our young children, we were treated to hurricanes Irene and Sandy. Both of which, to varying degrees, knocked out our power for an extended period and caused us to take our kids to grandparents’ and friends’ houses as the temperatures dropped and it was too cold for the kids to really sleep in the unheated house. Hurricane Sandy posed a more unforeseen threat as gasoline suddenly became almost impossible to find, making any escape plans even more nerve-wracking.

And now, here we are in Southern California, almost always expecting the earthquake we know could hit at any moment but being taken by surprise by wildfire instead. I think what I have learned in the course of my proximity to these natural and unnatural disasters is that you can never truly be prepared. You can try, you can plan, but in the end most of what plays out is completely out of our hands. What we can control, however, is our reaction to it all.

I consider myself a student of human nature, I’m always fascinated by how people behave under pressure. Whether, in my own estimation, the people around me or in my extended community are either over- or under-reacting is something I cannot help wondering about. Truth be told, it’s also a fixation that really helps pass the time while waiting for something like, say, a mandatory evacuation of my neighborhood to be lifted.

This most recent displacement has been particularly interesting to watch unfold on social media, on countless text threads and on community chat boards. I saw one of my favorite neighbors, a smart, thoughtful mother of three who works in our local elementary school, attacked online for sharing that police had just announced our mandatory evacuation was extended to include the entire town. Residents on a Facebook thread immediately called her everything from a liar and spreader of disinformation to a moron, for no reason. Moments later a robocall to every resident in town confirmed her story, but the apologies did not begin to flow in her direction. Yes, there are definitely tales of people coming together to help one another, but the longer these situations drag out, the more fraught with tension it all becomes.

I think what I have gleaned from my own experiences with disasters is pretty simple. First, get out. Just leave if there is in even a hint of danger to you or anyone who might have to rescue you as a result of your choosing to stay. The question I always ask myself is what is the downside to leaving? Usually there isn’t one beyond sticking around to guard and protect your home and belongings. Two, do your absolute best to remain calm (something I have often fallen short of in past adventures). And third, the old phrase “this too shall pass” is a classic for a reason. There have been countless times that it was the absolute last thing I wanted to hear, but it’s a sentiment that’s hard to argue with, so just hold on as best you can and try to remember whatever there is to be grateful for in the moment. No matter how small or seemingly insignificant just focus on trying to find something good. Even the slider(s) played a part in my own personal disaster therapy. And should that earthquake hit soon, I’m sure the sliders will do their part again.