I am very dismayed about what’s going on in Israel right now. Haters are going to hate, says Taylor Swift. And when you think about haters of Israel and haters of Jews, they seem to just keep on hating.

So if I express my deep grief for the pain and suffering and deaths of Israelis at the hands of terrorists, I will get plenty of hate mail and threats, I promise you:

“Serves you right for being Nazi oppressors!” they say.

“Death to Israel!” they say.

Besides haters hating, people who don’t believe that Israel should exist are probably going to keep on believing Israel shouldn’t exist. And people who think that what is going on in Israel is about an apartheid state oppressing Arabs because that state is bent on making Arab people miserable are going to keep on believing that. Those people will continue to get most of their news from sources that are reporting information inaccurately or incompletely, and in a manner that is inflammatory and a disgrace to journalism.

What is true is that the new face of terrorism is being carried out in the streets of Jerusalem. And outside of Jerusalem too.

Cars are driven intentionally into bus stops to kill the people who wait there. There are stabbings in the streets. Assaults on soldiers. The deaths of innocent people because of anger.

This is the face of the new intifada (insurrection). It is rising. Because trouble has been brewing for decades. And no one has figured out how to solve it.

I am not a politician. I am a Jew living in exile, pushed out for thousands of years, but tied to a homeland that can be peaceful; I know it can.

My family lives in Israel. I have lots of friends there, of all religious and political varieties. They live all over the place. They work there. Their children and grandchildren go to school there and they find spouses and raise babies and children there. That is their home. I can think of at least three friends who have made aliyah (immigrated to Israel) in the last year.

Our Arab cousins also live in Israel. They want to raise children and find spouses and get an education and not live in fear. They want clean water and access to medical care. A safe Middle East, for all citizens of the region, is a dream of mine. Isn’t it your dream too? 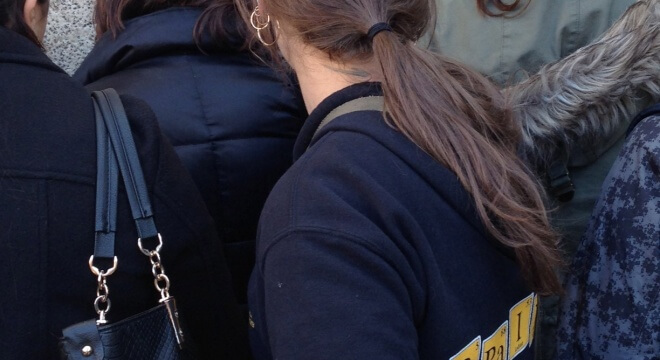 A contemplative moment for Mayim at the Western Wall in Jerusalem

I wonder when the words of Jeremiah will be true again. When “yet again there shall be heard in the cities of Judah and in the streets of Jerusalem, the voice of joy and the voice of gladness.” But when?

If I had the power, I’d say “now.” But I don’t have the power. So I wait and watch the news and fret. And I can handle the threats and the anti-Semitism. It hurts me, of course it does. But it’s just hating. And a media poopstorm. And lies and blame. I can live with the hurt. But I know the problem is bigger than all of that.

It’s time to stop finger-pointing and name-calling and calling for the end of Israel. It’s time to help the people of the region in a real and palpable way.

Collectively, we, on this planet, have the money. We have the resources. Someone, anyone, please. Enough is truly enough.

It’s time to really make an effort to fix this. I wish I had the answer, or that the answer could be grokked out with our sensitive, thoughtful GrokNation readers from around the world. But the reality is that we rely on those with greater power, with more money, and with more influence to make the decisions that we hope will create a safer Middle East and a safer world for us all.

#LetsGrok: We may not be able to grok the Middle East crisis to a peaceful resolution in this web community, but there are other things we can talk about:

Looking forward to robust and respectful conversation. (As always, personal attacks and objectionable material will be removed…) #letsgrok

News sources recommended by commenters (more may appear below):

Read More From Mayim
Explore These Topics: Israel
More Like This: