A few months ago I took my boys to Rochester, New York, for a speaking engagement. One of the only times we watch TV together is in hotel rooms. So in this Rochester hotel room, we watched whatever they wanted. On Animal Planet, we discovered a show called My Cat From Hell, which had us transfixed and almost too engrossed to go to Niagara Falls.

We watched many episodes, and we were so taken with the host, a man named Jackson Galaxy (aka “Cat Daddy”) who shows up with a guitar case full of toys, incredible facial hair, lots of piercings and tattoos, and tons of cat rings on his fingers. The man is a cat whisperer, for lack of a better phrase. He knows cats and cats love him. They flock to him. They communicate with him and he understands their needs and issues as if he was a cat himself. He’s phenomenal.

My Cat From Hell focuses on people with out of control cats. Cats who attack, cats who pee everywhere, cats who are “acting out.” The thing about cats, as opposed to dogs, is they basically give zero Fs about pleasing people. They’re out to please themselves. Jackson Galaxy helps people better understand cat psychology and also helps them identify problems they may not have realized are contributing to the issues because they don’t understand cats the way he does. 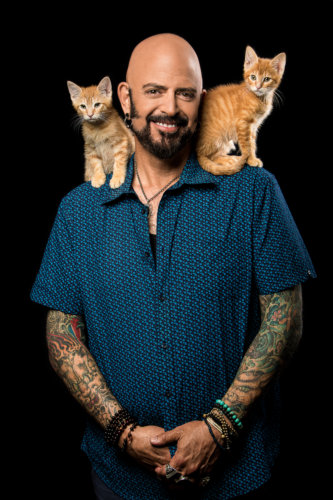 Come on, how’d he get those kittens to sit so nicely?

As I mentioned on my Instagram in December, I’ve been having cat issues for a few months. Since my break up (which is not coincidentally, Jackson tells me), my cats have been losing their minds. They’ve been fighting with the 10-year-old ornery cat, who they used to simply ignore. There have been urine and feces wars with urine and feces in places they ought not be, such as my mattress (which is not salvageable) and my comforter (ditto).

I have very rarely asked my “reps” to do something like this, but I asked them to see if Jackson would have me on his show. Because I was living with four cats from hell. Turns out the show is not in production, but his “people” said to reach back out in a month or so and he would come to my house. “Yeah, right,” I thought. Ever hopeful, my assistant Brandon reached out to his people and sure enough, he came to my house.

I was so excited I could barely sleep the night before. I wore my “Kitten Please” shirt, but I stopped there with cat clothing and accessories because I didn’t want to freak him out too much. He showed up and I literally had this feeling I was instantly on TV even though there were no cameras around. “This must be what people feel like when they see me!” I thought. As if he walked off of a TV and into my home.

I was thrilled that his “on-camera” persona isn’t a persona; that’s really him. He requested no one else be around when he met the cats so he could get to know them. They sensed that a cat master was in the house, and they all sidled up to him. He got to see them in their element, and I showed him where the ornery 10-year-old is sequestered and he watched some of her dynamics.

I couldn’t resist asking Jackson a few things about how he became the Cat Daddy; he humored me and my friends Chad and Chanel, who had arrived toward the end of his visit. He told us he didn’t have pet intuition as a kid. Cats “chose” him to be their voice, as it were. He also talked about getting married at the Best Friends animal sanctuary in Kanab, Utah, where I went a few years ago. His wife converted him from vegetarian to vegan. He grew up in New York. He just was so chill and comfortable and awesome to hang out with.

He gave me a list of things to reassess in my life with my cats: no more dry food. Why? Well, wet food is closer to the diet felines are used to: bloody, meaty deliciousness. Dry food is highly processed, contains no water (which they need), and is far from what cats naturally gravitate toward. He also said to enforce meal times as a way to motivate healthy socialization among my four babies. Food left out all day means they have no motivation to behave the way I want them to, such as not attacking the ornery cat. Meal times allow me to have them highly motivated to eat, so that they will eventually not care if the other cat is around. And if ornery cat is motivated to eat, she also will be less prone to avoid the others.

He also noted that the emotional impact of my recent break up is not lost on certain cats; especially on bottle-fed babies, like my Shadow, who has been behaving most uncharacteristically and is also showing other signs of stress and anxiety. If a cat’s “mom” is upset (which I obviously have been), the cat picks up on it and acts out as a way to bind their anxiety. They show anxiety by picking wounds and excessively scratching, getting weird about pee and poop, and getting urinary infections. We have all of those things going on. So basically: We can blame the ex boyfriend. Kidding!

Jackson gave me a few of his books and his memoir, which I can’t wait to read. He also suggested some really good adjustments to our home. I’ve added another litter box (I had one for the three cats who like each other and one for the ornery one alone in the room where she is sequestered); he said it never hurts to have more boxes since cats get very territorial, especially when their anxiety is elevated. Good to know. He also recommended encouraging more play spaces that are not my body (I added an awesome cat tree), and only giving treats for specific desired behavior as opposed to constantly “rewarding” them for just being adorable.

I have so much respect for Jackson, and I am so honored that he took the time to come and help assess our living situation. I found out that he has the Jackson Galaxy Foundation, where you can donate to support all of the work that he does with at risk animals.

Thank you, Jackson Galaxy, for being a champion for animal rights and animal hearts and forging deep and meaningful connections between people and their cats. We are already doing so much better since you came to visit! I am spending quality time with the ornery cat while the others observe and hang out nearby. We have all taken naps together and no one has attacked anyone. These are wonderful improvements. Meow.