Today was a big day. At 43 years old, I had my first mammogram. You’re supposed to start at 40, but I finally got around to it.

My father’s mother (z”l) had breast cancer in the 1950s. She had what’s called a radical mastectomy where they didn’t even entertain the thought of chemotherapy or treatment; they just removed the breast and she never had any issues ever again. She wore specialty bras with a “falsie,” as she referred to it, sewn into the bra. We never really talked about it. It wasn’t a thing women of her generation even thought to speak about.

I asked my internist for an order for the mammogram and he sent me to a clinic in Beverly Hills known for privacy, which I appreciate since you’d be astounded to hear the license some offices take when they recognize a patient from their favorite TV show. Suffice it to say, as a teenager, before HIPAA laws, nurses would let their kids take off a day of school on days I had check-ups for scoliosis. I would take pictures with nurse’s kids in the waiting room. Not comfortable.

Leading up to the day of the mammogram, I was nervous. What if I have cancer? Let’s not pretend that’s not what I was thinking. Because I was totally thinking that. So many are touched by cancer and it seems more and more women are being diagnosed. I was scared.

Additionally, as a single person, I did not have my partner with me literally or figuratively and that was hard. I asked a few girlfriends to accompany me, but they were working, and I sort of decided I would just tackle it alone. Not totally alone. I touched base with my mentor and a few close friends right before my appointment and knew I could call my bestie Elsa right after.

I made a few executive decisions about the day in terms of my appearance:
No pressure to shower. I hate showering. It’s a long standing thing. I knew that forcing myself to shower would throw me off my comfort game, so I skipped a shower. And I didn’t know you’re not supposed to wear deodorant so I had the humiliating experience of being handed an alcohol wipe by my technician and having her watch me swab my underarms before the exam. Very glamorous. 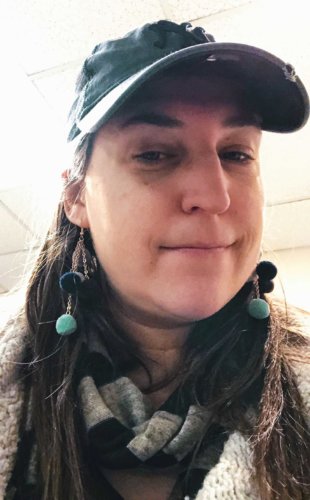 Fun happy earrings. I have a ridiculous pair of pompom earrings which I love. I wear them whenever I need to boost my mood. I wore them. 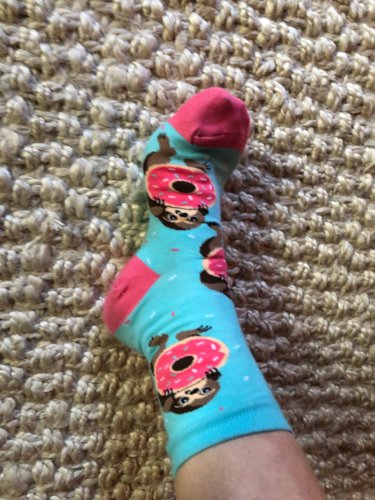 Mayim’s lucky socks have sloths and donuts on them

Sloth socks. I just bought these sloth socks with sloths hugging donuts. For the same reason as I donned the pompom earrings, I wore my sloth donut socks.

No bra. I brought a bra with me to put on after the exam, but the thought of unhooking in a tiny dressing room and rehooking just didn’t sound good. So I went braless. I wore a scarf so as not to offend on the way to the office. You know, because… breasts move. You get it.

So in I sauntered to this office. I had been there once before for a chest X-ray when I had pneumonia creeping up on me and they are very nice. I signed in and tried to make friendly eye contact with the five or so other women there in the waiting room. No luck. They were all busy on their phones. I overheard one woman getting upset at who I can only assume was the nanny and scolding her for not checking if her son had taken his medicine. She had a beautiful Ethiopian accent, and I told her so. I was making conversation. I was nervous. It’s a thing I do.

I was given instructions to put on a gown “open to the front,” which made my skin crawl with anticipation and I obsessively scrolled through the news and Instagram as I waited to be called.

The technician was lovely and gentle and she moved slowly, which I appreciate. When I’m nervous I like to take my time and she didn’t rush me at all. After the deodorant removal procedure she told me to disrobe. She said she sees a lot of breasts and I told her I’m a lactation educator counselor and I see a lot, too. I think of breasts in those situations like clients, not breasts. I think she must feel the same way.

She showed me this fancy 3-D machine and explained that it rotates around so I have to turn my head away from it when it scans. She said she will be taking four scans of “seconds” each. She put a lead skirt on me to cover my lady parts and it was heavy, which I actually found comforting. I like weight on me when I sleep and use a weighted blanket. I pictured this as a weighted skirt and it kind of felt like a hug. My long skirt and Dr. Martens and sloth socks were still on, so picture that if you will.

I practiced my deep breathing as she proceeded to pick my breast up like a piece of freshly risen dough. She hoisted that sucker up onto a plastic platter and above it was what looked like an acrylic drawer organizer which she then lowered down and she readjusted my breast like a raw chicken cutlet. I had this strange urge to tell her my breasts used to be much more awesome and full. You could never have handled them this way before pregnancy and nursing for six and a half years straight. (Yes, you read that right.)

It squeezed down in a not entirely comfortable way and then she said she had to crank it a bit more which she did. Oy. She said the 3-D machine allows me to continue breathing during the scan as opposed to holding my breath and that I could breathe gently and shallow. Got it.

The position you have to stand in was the most uncomfortable part. Your shoulder is cranked around and you have one hand on the machine and I lost circulation to my arm during each scan, which lasted about 20 seconds.

We repeated the chicken cutlet dough dance with the left side and then the machine tilted and she took side views. The looking away part was kind of unsettling. I like to see what’s going on in medical arenas, and darnit if I wasn’t curious what my breast looked like smushed between two pieces of see-through acrylic. I also didn’t want my breasts to feel ashamed for what they were going through, and it kind of felt like I was rejecting them by looking away. (Did I mention I’m an odd bird?)

The technician let me look at the scans on the computer which was fascinating, both because I worked in MRI imaging in college and ran a scanner and also because in my work as a LCEC I use diagrams of the breast, which are drawings; this was the stuff I point out to new moms in real time and in real anatomical correctness.

The technician then told me I’d be put in the ultrasound room. “The who what?” I said. She told me the doctor at the facility reads the scans right then—no waiting—so he might ask for further exploration. This didn’t make me feel good. I waited about five minutes, and he came in to say that because my breasts are dense, he wanted to do an exam and an ultrasound, but that the mammogram looked fine so far.

I purposely don’t go to male doctors, so this kind of threw me for a loop. I actually don’t even see a doctor for well check-ups; I visit the home birth midwifery practice that helped deliver my sons. Midwives are often nurse practitioners and they do well care for all sorts of women; especially women who don’t like the sterility and bureaucracy of many medical offices and OB-Gyn practices. I spoke up and asked for a female nurse to be present for my exam. That felt good. He seemed a bit taken aback, but the technician came in and smiled at me. I felt instantly connected to the ancestry of women and he made awkward small talk as he did the exam.

The ultrasound was not very comfortable and he asked what I do for a living and I thought to myself as he ultrasounded my breasts, “Please let this be a one sentence conversation.”

He just said, “Oh” and kept on rolling that ultrasound thing on my breasts. Phew.

He told me everything looks fine, and he’ll see me in a year. He pointed out that I am three years late, and I looked slightly sheepish and he left. I got dressed—I still didn’t feel like putting on my bra—and I left.

My mom said this was a rite of passage, and I guess it is. I felt proud of myself for taking care of my health, going it alone and being brave.

As I paid and got my receipt, which I will submit to insurance, I thought of the women in this country and the world who don’t have access to health care or insurance. I felt guilty about it in a way. And I hope that writing about my experience can in some way encourage women to care for their health and to continue to fight for the right of all women to one day have access to affordable health care.

I’m very grateful for the nice doctor and his staff who made my first mammogram a painless experience. And for those of you nervous to enter a doctor’s office in general, consider looking up a midwife in your area and asking if they do well-woman care even if you’re not interested in having babies or if you’re done having babies. It’s a nice gentle way to have your body inspected and probed.

Mammograms are important. And I hope for all women to get to experience the 3-D machine, a technician who laughs at your jokes, and who gives you good stories to tell. From my doughy chicken cutlets to yours, be kind to your breasts. They deserve it and so do you.

Read More From Mayim
Explore These Topics: Wellness Women's Health
More Like This: