There’s this really nerdy thing that Disney cast members (read: employees) do when referring to Mickey Mouse: They call him their boss. Would “Big Cheese” be funnier? Sure, and they call him that, too. Mickey Mouse, for Disney Parks cast members especially, has been the figurehead of the organization since Walt Disney’s passing in 1966. When I became a cast member in August 2010, and in the roughly six months to follow, Mickey Mouse came to represent a boss, an icon, and a sense of home.

I was several months away from graduating college with a B.A. in Communication when I decided to apply for the Disney College Program. If I got in, it would mean living and working in Walt Disney World in Orlando, Florida, for about six months in a position like food service, operating a ride, or some other minimum wage job. I didn’t have an internship or entry-level position lined up after graduation and I thought, why not put off adulthood for a little while longer? What could be better than getting paid to play at Disney World?

When I was accepted into the program I was offered the role of PhotoPass Photographer, which meant I’d be the person who takes tourists’ photos with Cinderella Castle or their favorite character. This lined up pretty well with my almost double major in photography, so I happily began making plans to move to Florida.

It took less than a day of living on Disney property to see Mickey Mouse in the flesh…err…fur? He marched into our Day 1 training session (called Traditions) to deliver our name tags, a very exciting rite of passage for a cast member. Later that night I saw him again at a welcome party. He was dressed as a chef, which apparently fit with the night’s theme that has been long-forgotten in the echoing caverns of my memory.

In the days that followed, I would see Mickey Mouse countless times—often more than once in a single day. From my assigned vantage point as a photographer on Main Street USA in Magic Kingdom, I could see him in three daily parades and a handful of performances on the stage in front of Cinderella Castle, not to mention the days I was assigned to take photos of the Boss Man himself. Each time Mickey crossed my vision, it was exciting. I would liken it to catching a glimpse of a celebrity—even when it wasn’t a surprise, it was a delight. Always cheery, a smile permanently affixed to his face and a jovial gait, Mickey Mouse was the embodiment of my happiness at Walt Disney World. 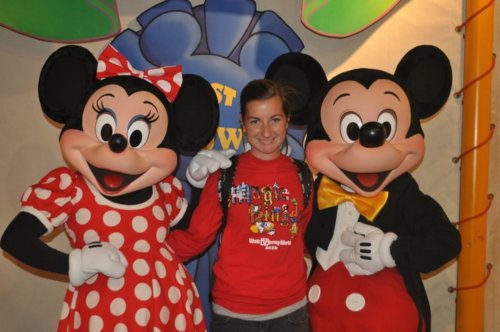 Natalie with the boss man, Mickey Mouse, and his life partner Minnie (they’re not officially married) in 2010.

It’s funny that I remember Mickey Mouse so fondly in these years since my tenure at Disney World has ended. I much more closely identify with (and collect the likeness of) Donald Duck. Donald is a sweet, old grump who is a secret softy, whereas Mickey is sincere, enigmatic, and charming. As an archetype and character, he’s hard not to like. I spend most of my time trying to figure out how to be back in his vicinity. Mickey Mouse managed to make a billion dollar operation feel like a cozy home.

Mickey Mouse is a fictional character created 90 years ago by a man I admire, but who I also admit had flaws. In creating this icon, Walt Disney took all the best parts of himself and imbued them into a black and white, animated creature. Mickey is imaginative, kind, friendly, charming, good-natured, and wholesome—all qualities that would describe Walt but with none of the chain-smoking, temperamental edge. He served as a blueprint for so many other Disney heroes to come, and set a standard for operating procedures in the many Disney theme parks around the world. To say the Walt Disney Company is flawless and wholly altruistic would be naive, but I believe it was predicated on values that people (and businesses) should continue to do their best to emulate.

Thinking back on the past 90 years of Mickey Mouse, it’s hard to conceptualize just how far he’s gone. He’s had countless professions, traveled all over the world, appeared on a plethora of merchandise, gotten a star on the Hollywood Walk of Fame, and, to this day, is regularly written in on ballots. His likeness is ubiquitous, and is one of the most recognizable symbols worldwide. Despite his fame, and the media behemoth he represents, I hope more people can come to recognize and mirror the characteristics Mickey Mouse possesses. As Walt Disney famously said, “I hope we never lose sight of one thing—that it was all started by a mouse.”