As Mayim wrote here last year when GrokNation was a newly-born site, she loves Weird Al and has for a really long time, and often uses it as a barometer in identifying people that she might become friends with: if they like Weird Al, there’s a chance she’d like them too. While we didn’t establish this fact before she and I were friends and GN colleagues, it was a thrill to both of us to discover our shared passion for Weird Al.

Last year, when Weird Al came through L.A. on his “Mandatory Fun” tour, Mayim was still in mourning for her father, observing the tradition of not listening to any music, let alone going to actual giant concerts, during that year. So when his 2016 concerts were announced, I suggested that we go. Tempted by the chance to see this megastar genius live in concert, and to bring her kids with her, we all headed out to the Hollywood Bowl Saturday night for the big show.

Mayim wasn’t the only celebrity there – we saw on Instagram that Rachel Bloom was also there, and we also spotted adult film star Ron Jeremy and comedian/actor Patton Oswalt in the crowd. There were also many people in Weird Al-related costumes, and of course, nerdy shirts like my Old Navy Star Wars tee, which I saw on at least three other people (dudes) in the open-air stadium of thousands…

And now we get to do the post-show download conversation here with you guys! Read on! – Esther

ESTHER: Mayim! We saw Weird Al! So what was your favorite part of the show? Your favorite song?

MAYIM: Oh my gosh, it’s so hard to choose! The epic Star Wars finale [click here to see a version of this from 2015 at the Greek Theatre] was pretty unbelievable, as was the entire band dressed as “Devo” for “Dare To Be Stupid.” I am such a polka geek that I think the best part was the two polkas, complete with actual video of the polka songs he was singing sped up so it looked like Miley Cyrus was singing “Wrecking Ball” at polka pace, as well as all of the other musicians’ videos projected as he sang. I couldn’t stop laughing at that.

ESTHER: That was pretty crazy, and – as a friend of mine pointed out – those sped-up videos and the polka renditions of them really shine a light on how ridiculous some of those pop songs and their lyrics are. I also loved the Star Wars finale, which featured “The Saga Begins,” which runs through the prequels’ storyline to the tune of “American Pie,” and “Yoda,” to the tune of “Lola.” Plus, Darth Vader and stormtroopers on stage! So nerdy and wonderful. Anyway, it’s clear that Weird Al is a genius: I love the way he is always on pop culture and music trends, incisively creating musically note-perfect parodies with lyrics that illuminate our obsession with pop, rock, stardom, celebrity etc. But I also really appreciate that he has maintained his self-proclaimed “weirdness” in a world that isn’t always kind to weird people. What’s your favorite thing about the unique genius of Weird Al?

MAYIM: He is unabashedly proud of who he is. I wonder if he has somber moments where he feels like he doesn’t fit in, but as someone who was always teased for being weird (my nickname is junior high was “Weirdo” which, even when it was used somewhat affectionately, still stung), I am still self conscious about doing my own thing. Weird Al is truly an inspiring example of someone who has never seemingly compromised on weirdness and has not only been successful despite it, has been successful because of it.

ESTHER: You were kind of in the show! Or at least Amy Farrah Fowler was, in a brief Big Bang Theory clip that mentioned Weird Al! Was that weird to see your face on the giant screen when you were sitting in the audience with your kids?

MAYIM: Man, that was so weird! I couldn’t recall the exact script when I saw myself and I was hoping I said I loved him or something; alas, Amy is teasing Wolowitz for liking Weird Al. I wanted to stand up and shout, “Al! That’s just my character; I LOVE YOU!!!!!'” But I didn’t. Didn’t want to come off too weird in front of my kids!

ESTHER: You should have done that! He should know that if you had written that scene, it would have been Amy sharing deep love for Weird Al. But seriously, I think he views it all – all of the Weird Al references in pop culture that he showed on the big screen while he changed his costumes – as complimentary, so I doubt he’d hold it against either you or Amy Farrah Fowler! But speaking of your kids, I know they already are very interested in music and have been raised by you – rightly of course! – to appreciate Weird Al. So how did the kids react to the music, both with Weird Al and with Straight No Chaser, the a cappella band that opened for him?

MAYIM: They’ve been fans of Weird Al for a while now, as soon as they were old enough to start listening to lyrics I broke out all of my Weird Al CDs for them. They like his early stuff but especially love the latest album, Mandatory Fun, which parodies songs they know such as “Word Crimes” and “Handy” and “Tacky.” They also have a fondness for a cappella because of my obsession with the Yeshiva University “Maccabeats” and because they are musicians. As budding piano players, they appreciate good musicianship and Straight No Chaser is a really talented band. This was their first concert ever and to see such an unusual performer in such a unique venue was so special for them and for me and their dad. They felt like such big guys meeting up with you before the show, and they didn’t complain at all about how late it was or anything. Success!

ESTHER: I loved seeing them before the shows and sharing my “vegan blueberries” with them. 😉 So glad they had fun. It’s such an enormous venue – I can’t imagine experiencing it as a kid, especially since I didn’t really go to concerts when I was younger…Weird Al’s body of work is vast and spans about four decades, and the show was an hour, so obviously Al – I call him Al, sometimes – couldn’t do all his songs. Which song is your favorite one you knew he wouldn’t play? For instance, mine is “One More Minute,” a 1980s doo-wop-style original that sounds musically similar to the Elvis song “I Can’t Help Falling in Love With You,” but is about the ex-boyfriend listing all the things – in increasing levels of extremity – that he’d rather do than spend one more minute with his ex-girlfriend. It’s obscure, but made my brothers and I go insane from laughter as we sang along. What about you?

MAYIM: Oh, you mean the song with the lyric “I’d rather rip my heart right out of my ribcage with my bare hands and throw it on the floor and stomp on it till I die…than spend one more minute with you”!?

ESTHER: Yes! That lyric was always my breathlessly-rendered favorite.

MAYIM: I love that song too! I love “Buy Me A Condo” which is about Jamaican immigrant who wants to be like all of the middle class Americans by wearing an Izod shirt and owning a condominium. But I also really love any of his non-parody songs, although they aren’t as popular. “Midnight Star” I think is my favorite, which features headlines from a fictional gossip magazine. Favorite headlines he uses as lyrics: “They’re Keeping Hitler’s Brain Alive Inside a Jar” and “The Incredible Frog Boy is On The Loose Again!” 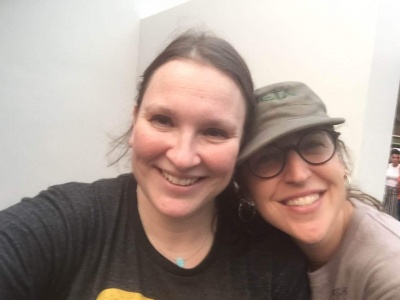 ESTHER: Thank you so much for making this outing happen! Weird Al was always on my wish list, and it was great seeing it with someone who’s both a friend of mine and a super-fan of his. Here’s to embracing the weird!!

MAYIM: I am so glad we could make this a Grok-worthy outing. I’d love to say it was all in the interest of writing this post, but it was just super-duper weird fun. Thanks for being a part of it!