Netflix’s latest TV original, The Innocents, is probably unlike anything you’ve ever watched. Sure, it has the feel of certain shows that came before it—the international procedural flair of Happy Valley or Broadchurch and the sci-fi influence of any number of the streaming service’s genre shows—but it’s a creation wholly its own. It blends a YA romance with supernatural genre tropes, resulting in eight episodes that will keep you guessing, and rooting for the young couple at the show’s center, until the very end.

The setup is simple, though the show is far from it. As Harry (Percelle Ascot) and June (Sorcha Groundsell) run away together through Great Britain while escaping the confines of June’s restrictive father and Harry’s life caring for an ailing parent, the two discover that June has the power to shapeshift. That is, through skin-to-skin contact, she can take on the forms of other people. They have no idea how it works, but what they do know is that it’s not just their parents looking for them. They’re also being stalked by a menacing, hulking man named Steinar (Jóhannes Hauker Jóhannesson), who in turn works for a doctor with mysterious motivations named Halvorson (Guy Pearce). He runs a secluded retreat where he purports to “cure” shapeshifters of their disease. As the two learn more about June’s condition, her mother who vanished years ago, and the men chasing them, their romance and understanding of the world is challenged again and again.

Ahead of The Innocents dropping on Netflix on Friday, we caught up with the show’s creators and writers, newcomers Hania Elkington and Simon Duric—the latter a storyboard artist for Star Wars: The Force Awakens—to chat about genre storytelling, creating complicated characters, and their vision for The Innocents, which melds all of their favorite things while exploring themes of identity and self-discovery.

GROK NATION: Tell us a little bit about the seeds of The Innocents: How did it come to be?

HANIA ELKINGTON: Simon and I have pretty different tastes. Simon is very keen on intelligent genre, quite muscular storytelling. I really like community shows, families that keep secrets, that kind of stuff. We realized there was this space where we could create a world that would be quite an unusual hybrid of tones. When we started talking about shapeshifters and combined it with a young love story, that’s exactly what happened.

GN: After watching the trailer and then digging into the episodes, I was surprised by how much the teen relationship becomes a large focus, with the sci-fi mystery filtering through their story of love and connection. Is that tricky to balance the need to reveal enough about the mystery while also making sure people are invested in the romance between June and Harry?

HE: It was always crucial for us to put that love story front and center, to go through the journey with them, see it through their eyes, and come out with them at the end. I think we use the supernatural element as a lens on that relationship, to really explode the stakes and the dramatic situations.

SIMON DURIC: The best sorts of genre shows and movies do it the same way: They make you care about the people in it first and foremost. The genre stuff, whether it’s sci-fi or horror or whatever, is obviously an important part, but it has to be secondary to the characters.

GN: And yet, despite the young romance at the center, it’s not really a “teen” show. The Innocents has a broad appeal.

HE: For us, we wanted to take the premise of falling in love, finding out who you are—what will you do for love?—and make it relevant to every character, whether what they’re doing seems to be good or bad. We wanted to address really universal themes in terms of identity and love and sacrifice, and look at them through a prism of very different characters. I hope that means it doesn’t just appeal to a YA audience, but also fans of genre, family drama, Scandi-noir, or whatever it might be.

GN: What surprised me along the way was how you played in the gray areas with a lot of the characters. In your typical YA show, you’re expecting June’s dad to be this abusive monster, or Harry’s mother to be hiding dark secrets. You tease it a bit in the first episode, but then move away from that and show these are all people with complicated emotions and motivations.

HE: No one really presents a genuine threat unless what they want is understandable and emotionally feels relatable. If somebody wants to save their child, I fear that person more because they’ll go to extra dark and devious lengths. So, what would you do for your family, for the person you love most in the world? These are questions that create great heroes, and great antagonists. So for each of our characters, it was important to us to give them a developed emotional storyline rather than just be—

GN: Can it be hard to keep those characters in a sort of moral middle ground as you’re pushing them into situations where they do terrible things and perhaps their motivations are more sinister?

SD: The very best villains are neither good or bad; they just believe 100 percent in what they’re doing. So when we were writing these characters, we understood why they were doing what they were doing. I don’t think we ever felt the need to push them to the bad end or good end of the scale. We just have to make sure that character is following what they wanted from the beginning of the series.

HE: I think if you ask anyone—a character or a person in the real world—”Are you a bad guy?”, no one’s going to say yes. In their world, they’re the good guy. So there’s no point in writing anyone as a villain. You write everyone as the hero of their own story, and then the audience is free to take their stance on who they think is doing admirable things and who’s not. 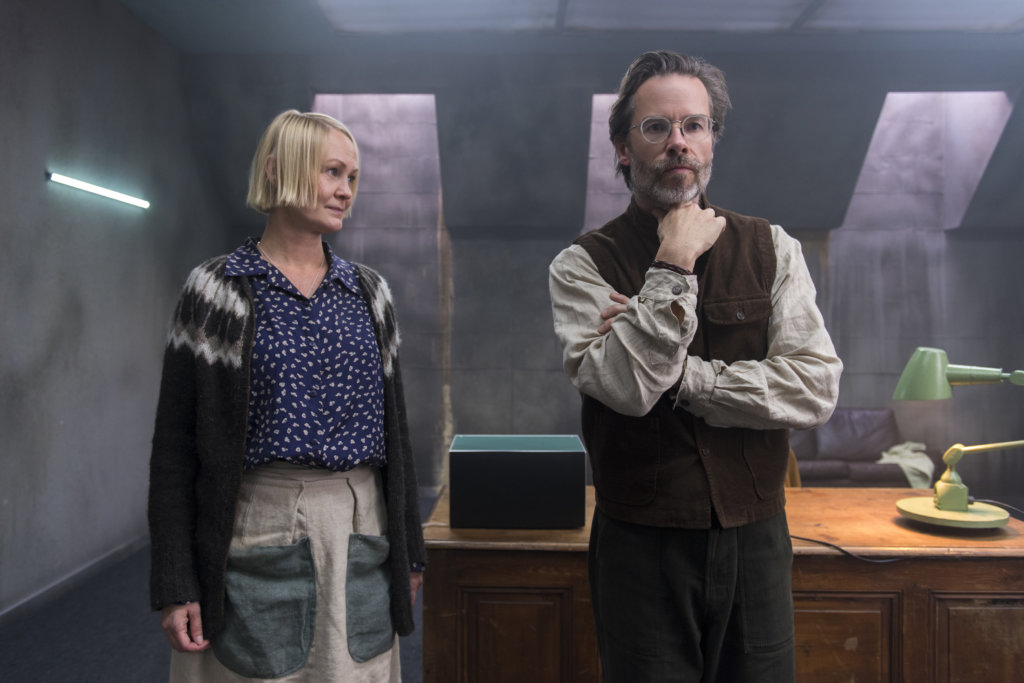 GN: In the show we see that all the “shifters” are women. I have some ideas as to the significance of that, and I was wondering if you could speak to that.

HE: There’s a few things going on there. The first of which is the place where we got our mythology was these pre-medieval, bloodthirsty Viking warriors. In cultural legend, they’d shapeshift into wild animals in battle. Having this in modern times, we wanted to turn it on its head. This time, instead of being all male, war-like physical violence, we wanted it to be modern, forward-thinking, female, empathetic, emotional, to put a different twist on that body transformation. The other thing is that women, physically, have had quite a tough time through the ages in terms of being suppressed, subjugated…over-determined in terms of their bodies—are they too thin, are they too fat?—and women’s bodies can be extraordinary, magical things in producing humans and continuing the human race. So there’s something there as well, in company with the fact that the supernatural has for a long time been a largely male-dominated genre. There’s a number of reasons why it felt right to not only put a young girl front and center as our lead, but also to focus on female relationships and female inheritance with this show.

GN: That’s interesting. It seems to me that part of June’s journey is that once she’s out in the world, she doesn’t have as much ownership over her body. Perception about her changes, whether it’s the way she inhabits the body of a pregnant nurse after one instance of shapeshifting, or how men leer at her. She becomes more of an object to the larger world.

HE: It’s interesting because we’ve got June as a very sort of uncertain, shy, sheltered position, and a lot of the themes that we look at have to do with identity and self-acceptance. In order to do that, we’re posing the question, “Does June need to accept shifting as part of what she is?” She really thinks it’s a curse that she wants to be cured of so that she can go back to how she was. Part of growing up, is realizing we have to be who we are and accept parts of ourselves. Can Harry do that with June, who he says he loves? And, more importantly perhaps, can June do that with herself?

GN: On that note of being judged and critiqued: The Innocents is a show filled with a lot of joyful moments of love and connection, but also populated by shady characters with shady motivations. Do you feel like you’ve created an optimistic show, or one that’s wary of people and what they’re capable of?

HE: I would say there’s a really positive optimism to it, actually. I think there’s something about the power of love and connection that we put front and center. There’s something about the breaking down of boundaries, overcoming fear. I think with shifting you can literally see the world through someone else’s eyes, so there’s a message of empathy—which, particularly now, with where we are in societal terms, feels like a very strong moment to talk about how we’re the same and how we should be understanding each other.

GN: Is it strange to spend so long working on a creative vision and then, with the Netflix model, just have it all out there in a single day, including all the feedback that happens immediately?

SD: It’s as strange as waking up with a second head. I still remember when Hania and I were coming up with the idea, and we were talking about it and we did have a moment where we looked at each other and went, “Are we mad? Is anyone going to get this? Will anyone want to watch this other than ourselves?” And now it’s coming out, all the episodes with all the talented people who worked on it, it’s absolutely amazing.

Watch all eight episodes of The Innocents on Netflix now.