As Mayim has written before, the life of a child actor is challenging, and when that child actor begins to grow up, things don’t get less complicated. For Stefanie Kahn, a performer since she was very young, the life transition from child to adult also meant finding a new life path. Read on for Mayim’s interview.

Mayim: Thanks for talking with me today, Stefanie! I know you in a lot of ways; I know you as my friend and I know that you’re a realtor and I know you’re a mom. But for people who are just learning about you, please tell us in a nutshell what your childhood acting experience was.

Stefanie: Well, I loved performing on stage from the time I was very little, in camp shows and ballet shows and things like that and when I was 9 I joined a local children’s theater company. I got some lead roles and the lady who ran it was a very brilliant teacher. She took me into Manhattan from New Rochelle, NY to meet some agents, and I started going out on commercial auditions when I was 11. I was always very “character-y” [not a ‘leading lady’ look]. I was in the “ethnic” division of the agency when I was younger. [NOTE: the ethnic division was for actors who were considered outside of the ‘norm’ for roles at this time; the norm being small featured blonde and blue eyed kids].

My parents were teachers. My mother loved the theater and always took me to the theater but my parents had no involvement or connection to show business, and at that time, it was considered unusual for Jewish middle class girls to go to the city for auditions. But I loved it— I really, really loved it. My mom or dad would take me to the city after school. I did a bunch of commercials, starred in a ABC TV special and worked in the theater.

The head of my children’s theater promised me she was working on getting me an audition for Annie, but it ended up taking two years which was ridiculous. By that time I was too old to play Annie, but I ended up getting cast as an orphan, and that was an amazing, amazing thing – it was one of the best life experiences I ever had. 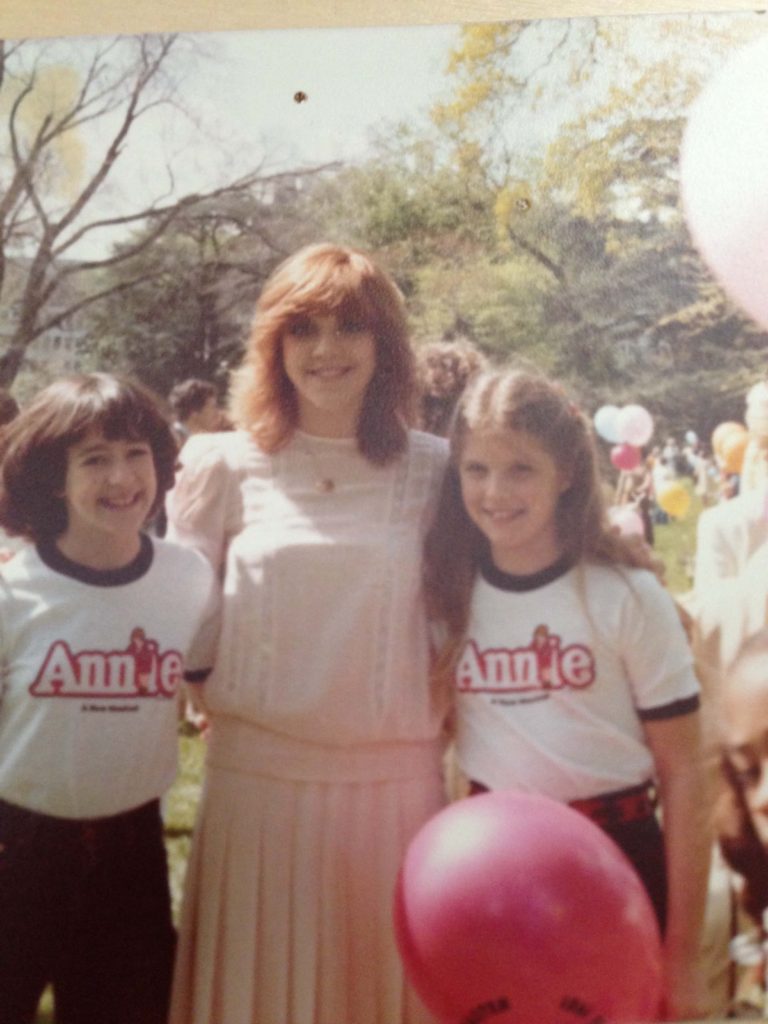 Stefanie (left) along with another child actor who also played an orphan, with the original Annie, Andrea McArdle, performing at an Easter show at the White House.

Mayim: How long did that run with you in it?

Stefanie: I was in it for 6 months. I was in the California company at the Shubert in LA and then on to Seattle for a couple of months. Daddy Warbucks, Reid Shelton from the original Broadway cast, was in it and it was just really an amazing experience to be part of something like that. It was my dream: I had dreamed about this for so long – about being on that stage – so it really was fantastic and the cast was like a family which was great. After Annie, I started going into the city by myself for auditions.  It was hard to get work for a couple of years but then I got cast in a couple of movies and did a musical revue on weekends in the City with other kids from Broadway shows.

Mayim: People ask me a lot about how it was to go from “Blossom” straight into college and the real world, and I wonder what that was like for you. Can you talk a little bit about the transition from being a child or teenage actor to being an adult?

Stefanie: It was difficult. I went to college for theater when I was 17. I got my BFA; I was very one-track-minded. It was an extremely difficult theater program where it was the same curriculum as the graduate program. They kicked people out every year if you couldn’t keep up; it was as if we were competing to cure cancer. I mean, it was ridiculous when I look back now; I think I should have left that school. I was one of only eight that graduated from a class of 28. I proceeded to pretty much have a nervous breakdown as soon as I got out of college. I think the structure of college held me together— I don’t know if I’d call it a full nervous breakdown, but I definitely had major anxiety and depression and I was always worried about needing to look younger.

I worked a little bit after college but my 20s were a very difficult transition. My identity was so wrapped up around being an actress and that’s how I always got attention. I was a small kid; I developed late, I didn’t have great social skills, I wasn’t cool. So when I was around my theater friends that’s where I fit in. That’s what my identity was. And I thought that once people saw my talent, that’s when I was accepted. And that’s when boys would like me and all of that. And so I struggled very much. In my late 20s, I started to meet friends who really liked me but who had never seen me perform, and I was kind of shocked that they still really liked me!

Mayim: So what happened after that post-college adjustment?

Stefanie: When I was in my early 30s, I would say I started to work a little bit more. I got a lot of callbacks for commercials, did a few of them, had little roles on a few TV shows and did a couple of excellent plays.  I got more work because now I was wearing glasses (which I needed for real). So I could now play a secretary, a young mom – all those kinds of things. But my career wasn’t going great; I always felt like I wasn’t at the right place at the right time. I decided that I might as well have kids because I loved being with my niece and nephew…

I have to say that letting go of the acting career was a remarkably painful, very, very painful experience, because my identity was so tied up in it. And coupled with the pressure I put on myself and the perfectionism involved, it was terrible. It absolutely blocked me. I don’t really even have the desire anymore to act…

Mayim: Right; so that leads to my last question: do you miss it? What does that feel like?

Stefanie: Well, yeah, I miss it a lot. I mean I miss the people; sometimes I’ll sing in the shower and I’ll just start to cry. Even now I miss that part of myself. I loved performing. To me the theater was like a church. What got in the way for me was this: the work is one thing and then the desire for fame, and needing it to validate myself as a person, was a big problem.

I hope to do it again someday, but what actually healed a lot of the attachment to it for me was after my divorce, my whole life flipped upside down. I had to find work; I had to support my children. I went into real estate and then a few years later, I felt like I really had a story to tell so I started writing. And for me now, even though I don’t get to do it as often as I like because I have a full-time career in real estate, writing has become a love of mine- an even better fit for me than acting!

Mayim: That’s really neat. So how did you decide to go into real estate?

Stefanie: Well after my divorce, I had to sell my house. And I talked a lot to the real estate broker; I told him that I needed to make some extra money and that I don’t have my kids on Sundays; and [asked] “can I do open houses for you?” And he said “of course!” And he thought I was great with this. I am very outgoing, I’m smart. This broker asked if he could pay for me to take the exam to be a realtor, so I did that just as my two-and-a-half year-old was starting nursery school.

Mayim: So do your acting skills have anything to do with it at all? Talk about that a little bit.

Stefanie: I’m really good with people. I’m not shy. I know how to interact and I come across very confident even though I don’t always feel it. And I have a strong sense of myself— that comes from being on the stage. I find that a lot of people in L.A. real estate have backgrounds in show business…they were actors, writers, models, some come from the executive side of the business.  It’s a relationship-based business.

When I would host an open house, it was like I was hosting a show! And during the escrow process, the shi* often hits the fan and it’s a little bit like conducting an orchestra. So there’s a little bit of the same thrill and ups and downs of performing in what I do now. I don’t think “normal” people like doing real estate; it takes the same kind of person to do this as those who need a little bit of a buzz in their lives, like actors. And it’s inconsistent, like being an actor: nobody would put up with inconsistency and drama unless they were a little bit used to that!

Mayim: Your story is so interesting…I hope that it will maybe touch or inspire someone, because I think what’s fascinating is the way you have been able to transform your love of theater with your identity now.

Stefanie: My story doesn’t sound that interesting to me, but I hope it will be to someone!

Mayim: [Laughs] Thanks so much, Stefanie!

Read More From Mayim
Explore These Topics: Acting Child Actors
More Like This: