The new book by journalist Hannah Jewell, She Caused a Riot: 100 Unknown Women Who Built Cities, Sparked Revolutions, and Massively Crushed It features 100 stories from a diverse collection of women who were brave and brilliant—but “too unconventional, too political, too poor, and not ladylike enough” to be recognized for their work at the time.

Grok Nation is excited to provide this exclusive excerpt, the story of Annie Jump Cannon. She classified 400,000 stars—and she wasn’t even allowed to use a telescope. Read the extremely funny way Hannah wrote her story in She Caused a Riot. (And if a few curse words bother you, this excerpt—and this book—probably isn’t for you.) 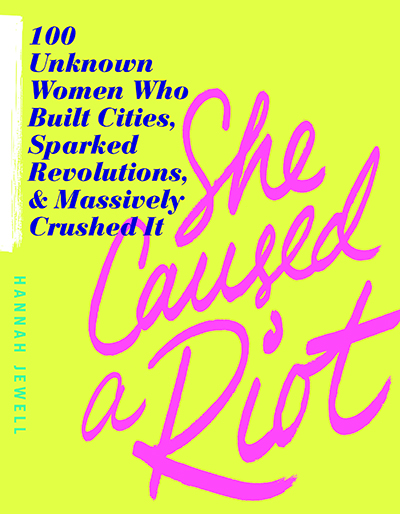 If I know anything about space, and I don’t, it’s that there’s quite a lot of it. If you asked me how many stars there were in the universe, I would say, “loads.” If you asked me to categorize all the stars in the night sky, I would say, “No, thank you. I would rather spend the time in bed watching The Bachelorette.”

When Annie Jump Cannon went to work at the Harvard Observatory in 1894, however, The Bachelorette didn’t exist yet, so instead she spent her time inventing a stellar classification system that was so stellar that it’s still used today—and she used it to record and catalogue four hundred thousand stars. If you’re unfamiliar with the subject, that is loads of stars.

Annie had been interested in the stars since her childhood in Delaware, where she and her mother would observe the night sky from their DIY observatory in the attic. Her supportive parents sent her to study physics at Wellesley College, after which she spent a decade wandering about and dabbling in photography and music, as twentysomethings of any era are prone to doing.

When she joined Edward Pickering’s team at Harvard,* she was just one of many women he employed as computers in the observatory. In those days, a computer was a person, rather than something you use to watch The Bachelorette in bed. Pickering employed women because he didn’t have to pay them as much as men, a ridiculous idea that has thankfully died out with the passage of time and has never affected me personally or any women I have ever known. Together, the women were known at the time quite creepily as “Pickering’s Harem.” So what was Cannon and the other women’s task, for which they were paid little more than unskilled laborers and a whole lot less than a male scientist?

At the turn of the century, there were about twenty different systems proposed for the classification of stars, and no one could work out the best way to do it. Annie came up with a system of letters and numbers by looking at their spectra—basically, if you put a certain star’s light through a prism, what kind of rainbow would you see? The pictures of the spectra for each star were not how nice Instagram photos of rainbows are, but rather glass plates with smudges and dots and blurry bits.

Annie, who was deaf for her entire career and relied on lip reading, would remove her hearing aids while she worked in order to have absolute focus. She could read out what kind of star each of the spectra indicated by merely glancing at the plates. “She did not think about the spectra as she classified them,” one of her colleagues explained. “She simply recognized them.” She did this for more than two hundred thousand stars visible from Earth down to the ninth magnitude, which are incredibly dim (no offense to ninth magnitude stars). Later, she expanded the work to go all the way to the eleventh magnitude, which are the most idiot stars of all. Our sun, the most popular star among Earthlings, is a G2. This means it’s one of the second-hottest types of yellow stars. (But don’t worry, Sun. You have a way better personality than the first-hottest stars.)

Her work was published in nine volumes between 1918 and 1924. Was her system called the Cannon method? The Annie J method? The Annie Can(non) Jump method? Nope, it was called the Harvard system. Which is, as Alanis Morissette would say, a little bit ironic, given that Annie was not made (or paid as) a member of the Harvard faculty until she was in her seventies in 1938, just three years before she died.

For years, Annie hadn’t even been allowed to use a telescope alone, as it was seen as dangerous for a woman to do so. Which makes absolute sense. What if she saw something in the heavens that caused her to faint or win a Nobel Prize? And of course, a man and a woman using a telescope together, at night, when the stars were out, was an impossibly scandalous prospect. Women weren’t allowed to use the best telescope in the world, at the Palomar Observatory in southern California, until the 1960s. And no female astronomers—despite the fact that from the nineteenth century, about a third of all those who worked in the field were women—would be elected to the National Academy of Sciences until 1978. (One Johns Hopkins professor would vote against Annie’s election to the academy because…she was deaf. I can’t even understand the logic of this enough to make a joke about it. Just, what the fuck?)

As some fucking guy said to another female astronomer, Sarah Whiting, at the end of the nineteenth century, “If all the ladies should know so much about spectroscopes and cathode rays, who will attend to the buttons and the breakfasts?” This guy, a senior European astronomer who considered himself very clever yet didn’t know how to make his own toast, sadly died shortly after making this statement by tripping over a box of buttons and landing face-first in a frying pan.**

[**I didn’t bother looking up how he actually died, so who’s to say it wasn’t by tripping over a box of buttons?]

The thing about Annie Cannon’s work, and the work of all the underpaid computers and astronomers in the Harvard Observatory and elsewhere, was that it was seen as a fundamentally female job. Even if women wanted to put forward their own theories and do the fun, experimental bits of science, a huge amount of their time was taken up with rote labor and the collection and classification of data—which men would then use to publish papers under their own names, of course. Women like Annie were tasked with things like planning social events and fund-raisers and generally mothering everybody, much like things turn out in every office on the planet Earth as we all hurtle together around and around our pleasant G2 sun.

A reporter for the Camden Daily Courier in 1931 wrote this when Annie Cannon won an important award for her work:

“Housewives may be a little weak on astronomical physics. But they will understand just how Miss Cannon felt. Those heavens simply HAD to be tidied up.”

Shortly after publishing his report, that journalist sadly died by tripping over a large pile of laundry his wife had left untidied.***

Annie never had a family of her own and lived, worked, and breathed the observatory. She was beloved by female and male astronomers alike—the men saw her as unthreatening to their greater man’s work. She was indeed a motherly figure and received many awards in her lifetime for her classification work. She was the first woman to receive an honorary doctorate from Oxford University, which, if you haven’t heard of it, is a university that people go to in order to learn how to become insufferable for the rest of their lives.

While Annie broke down barriers and supported other women in science for her entire life, in addition to her work toward women’s suffrage in the United States, she was still quite a traditional person who believed that yes, certain types of science were more suited to women than others.

But other women in the lab were more radical than she was, fighting against their poor working conditions. Williamina Fleming, who had taught Annie Cannon, pushed back against the fact that she was paid a thousand dollars less than her male counterparts yearly—a lot of money in those days. And, hell, a lot of money now. Fleming wrote that Pickering “seems to think that no work is too much or too hard for me no matter what the responsibility or how long the hours. But let me raise the question of salary and I am immediately told that I receive an excellent salary as women’s salaries stand.” Beware bosses who say you should simply be grateful to be there.

Another woman working in the observatory, Antonia Maury, wanted recognition for her work. She wanted credit, and she did eventually manage to scrape some for herself. And another, Henrietta Leavitt, worked herself to death for Pickering, who published the results of her work under his name in 1912. Leavitt’s observation of something called the period-luminosity relationship meant that for the first time ever, scientists could work out the distance of stars and indeed the size of the entire universe.

But none would fight harder or achieve more than Cecilia Payne-Gaposchkin, the subject of the next chapter, who said that Pickering’s employment of Leavitt to “work, not think” would “set back the study of variable stars for several decades.”

“Annie Jump Cannon” is excerpted from the book She Caused a Riot: 100 Unknown Women Who Built Cities, Sparked Revolutions, and Massively Crushed It. Reprinted with permission from Sourcebooks.