Gia Mora, Taryn O’Neill and Tamara Krinsky are the Scirens, a group of multihyphenate actress/writers whose mission is  are using entertainment to champion STEM literacy through entertainment.

Cara Winter:  Hello, Scirens!  Thanks for taking the time to chat with us, here at Grok Nation!  So who are the Scirens?

Taryn:  We are a trio of science enthusiastic actress-writers who banded together because of our shared belief in the importance of science literacy, and the idea that entertainment can be an exciting delivery system.

Cara:  For each of you, what was your ‘ah-ha’ science moment, where you realized you were really interested in science?

Gia:  I’ve always liked science, and in college I would write short stories to study for chapter exams in chemistry and physics. Even way back then, I recognized the power of the narrative form in teaching science concepts.

Taryn:  My ah-ha moment was more of a slow burn. When I began developing and writing sci-fi scripts (I’ve always been a sci-fi fan), I wanted to make the science as theoretically legit as possible. This led to some extensive research and ended up bringing out my inner scientist; the real world of science is way cooler than any sci-fi idea I can come up with!

Tamara:  For me, an interest in science began in childhood, and I went through a bunch of phases. During my chemistry phase, I’d hang out in the kitchen with my chemistry kit and blow things up with the Bunsen burner. I went through an electricity phase where I’d make open and closed circuit contraptions with shoeboxes, wire and big ol’ 6-volt batteries. And then there was my astronomy phase, where I’d make my parents wake me up at 2am to watch lunar eclipses in the back yard. I’m still in that phase!

Cara: Do you have one favorite area of science, one that fascinates you the most; if so, why?

Gia: Physics! Being alive today is like being alive when explorers were discovering the continents, except that instead of discovering the biggest parts of our planet, physicists are discovering the tiniest, most fundamental building blocks of the entire universe. [Particle] physics so fascinates me that I wrote a one-woman show about it called Einstein’s Girl.

Taryn:  The laws of physics govern the smallest particle to the largest galaxy, and it looks to answer the deepest questions underlying our existence. I’m also a voracious reader on neuroscience and genetics – I’m always looking to decode what makes us ‘conscious humans’ – and I’m fascinated by what the future will bring regarding bio and neural enhancements.

Tamara: I’ve always had an interest in astronomy (and was lucky enough to go to adult Space Camp a few years ago.). But I’m just as fascinated by neuroscience and genetics – looking inward – as I am by looking upward. I followed discoveries like the decoding of the genome online, and in addition to the actual science, was just as captivated by the resulting questions about human potential, nurture vs nature (now we know it’s not an either/or) and the morals and ethics of scientific progress. Ultimately, this particular interest circled back around to combine with my artsy side and I created a one-person show about a stem cell research trial.

Cara:  I’ve been thinking deeply about our basic need for human connection, and whether or not technology – the T in STEM – is helping or hampering this need.

Gia:  To me, technology is the logical extension of the duality of our humanness: we have capacity for such greatness and equal capacity for destruction. The tool is the same; the application is what determines the outcome.

Tamara: Technology is a tool that you can use to bring you closer or act as a barrier. Especially in the wake of the election, there are a lot of conversations about whether social media is inherently good or bad for society. I can see both sides of the argument, but my inner idealist would like to believe that ultimately it can help us connect with one another in new and exciting ways.

Taryn:  Matthew Lieberman, a Cognitive Neuroscientist from UCLA wrote a book about how our brains are wired for social connectivity. It’s why we are so naturally drawn to reality TV and social media. Technology is a tool that can help accelerate and expand that desired connectivity. But what does it do to the authenticity and the quality of it? There are layers of algorithms (and vanity filters) between our circles and us. And on the flip side, technology allows us to be a silent witness to other people’s online relationships, “FOMO” and heightening loneliness.

Cara: For years I thought LOL meant “lots of love,” so…

Gia:  (still laughing)  I’m going to start using LOL for “lots of love.” And ROTFL for “racing out to find lemonade.” You know. A useful phrase.

Cara:  (laughing)  Lemonade is delicious!  Okay, back to  the interview… We often hear about the gender gap in science and technology. What can we – as society, and also as content creators – do to get more young girls interested in STEM?

Gia: I’d like to see a shift toward a more integrated arts and sciences education, teaching all subjects in context of how they apply in the real world. This kind of program would give students an opportunity to see their learning in action, fostering young scientists and artists alike. I think it would help if we stopped ranking fields like economics and geoengineering as “better” than the so-called “softer” social or biosciences. The gender gap first rears its head in middle school, [when] girls report a desire for collaboration and creativity, which often is completely absent from STEM education. By the time those girls are in high school, even if they possess high verbal and math SAT scores, they still don’t go into STEM. I agree with Jonathan Olsen and Sarah Gross that we could encourage these capable young women by including storytelling in our science curriculum. Stories by nature are collaborative, inclusive, and creative. They have the power to highlight how girls’ desires are not only compatible with science but are crucial to the future of humanity. If we can’t work together to find creative solutions, we have a much bigger problem than just getting girls interested in STEM.

Taryn:  I really appreciate what President Obama did during his two terms – he put STEM supportive activities front and center with his White House Science Fairs and initiatives to champion girls in STEM.  One of our main focuses as Scirens is to create diverse engaging female characters who just happen to work in STEM fields. We want to ‘normalize’ STEM characters and do away with limiting stereotypes like ‘the loner science lab nerd’ and ‘geeky coder’! We need to paint a new picture of STEM in the media, shape a new narrative. And that will hopefully be extended to how STEM subjects are taught, where the educational system infuses creativity and art into the learning of STEM subjects, [adding “Arts” so that the acronym is] i.e., STEAM.

Tamara:   Show young girls diverse, inclusive versions of STEM professionals onscreen. Amplify one another in the classroom, much like the story about the female Obama staffers who supported one another’s remarks in meetings. Mentorship. Create community. Use technology to create engaging content for new platforms so young girls can experience science in new ways, i.e. VR, 360 films, etc. Address the timing issues of tenure and publishing and how that intersects with having children so that making the choice to have a family doesn’t automatically mean you’re opting out of professional advancement or losing salary years. Provide support mechanisms for women who want to stay in the workforce. And communicate all of that to younger women so that when they are making decisions in high school and college about what to pursue, they don’t see STEM fields as an incompatible choice. Go beyond the obvious issues of harassment and the Boys Club and educate men on micro-aggressions that – while not technically hostile – create a classroom or workplace that is unwelcoming and discouraging for their female counterparts. Oh, and pay women just as much as men!!!

Cara:  You’ve been pitching some “women-in-science”-based TV shows. When you meet with people who are in the position to greenlight a movie or a show, is there a disconnect at the ‘gate keeper’ level when it comes to smart women, and women in STEM careers?

Gia:  We’ve just begun the journey of bringing our projects to the marketplace so can’t make a blanket statement about the industry, but what I am finding is that the production entities are still looking to acquire what they know there is already a market for. There is not yet a clear demand for our unique brand of content. So I don’t think there is a disconnect, it’s more of a fear of uncertainty and change… It’s a little like the chicken-and-the-egg conundrum. But we know that we will find the right partners who truly believe in our projects and their purpose.

Cara:  Are we just too wrapped up in sexist society archetypes (where women aren’t the heroes, but the damsels in distress)?   If so, have you come up with any ideas of how to fight back against that?

Tamara:  There is an inherent sexism in Hollywood, the data shows it (from lower paychecks, to number of female roles, to lack of female directors). Standing tall as empowered, intelligent women in this business can be a challenge, but one that is imperative. But, as Gia mentioned earlier, Hollywood is also an industry that functions on a formula of scarcity and fear. There is a scarce number of dollars to create content and there is fear of change.

Taryn: And the growth of the digital ecosystem has ravaged traditional Hollywood, so there is a certain desperation to ‘guarantee’ a project’s success – whether by replicating a formula they already know has worked, or having celebrities and/ or YouTube influencers with a pre-existing fan base in the project.  We are neither celebrities nor ‘influencers,’ but we all have production backgrounds and are multi-hyphenate actress/writers in the digital realm – so if it takes us coming up with innovative ways on a digital platform to share these stories and characters, then we will rise to the challenge.

Cara:  Well, Scirens, this has been a treat. Thanks for answering all of my nerdy questions.  And thank you, from the bottom of my heart, for making fun of me about “FOMO.”

Cara: Lots of Love to you too. 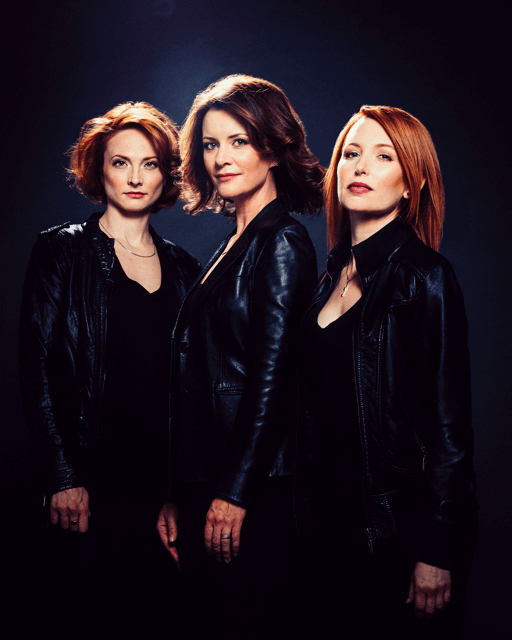