Patti Smith performed yesterday at the Montclair Literary Festival and I was one of the rapt 1,000 or so people in the sanctuary at First Congregational Church. (I am lucky to live in a New Jersey town that has a film festival, a jazz festival, and since last year, a literary festival.) It was the biggest bargain: For $37.87, we got a copy of her book, Devotion, which is a volume in the Why I Write series from Yale University Press, plus a riveting performance in which Patti wove readings from her books with songs, accompanied on guitar by her long time collaborator Lenny Kaye. Lenny also drove them out to Montclair from Manhattan, she told us from the stage.

Patti Smith is a writer, an artist and a musician, who has long been a hero of mine. Her 1975 album Horses is obviously one of the greatest albums of all time, an irresistible fusion of her poetic lyrics and a punky garage rock. Her 2010 book Just Kids, a memoir of her youth in NYC living with the artist Robert Mapplethorpe, is beautifully written, both unpretentious and profound. 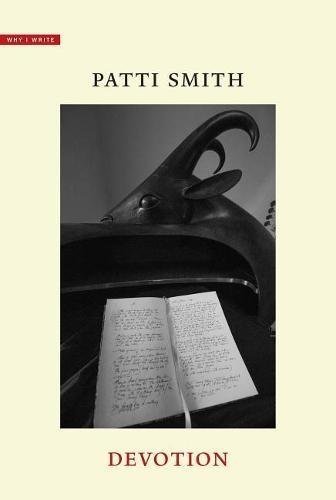 Yesterday afternoon, Patti gave us that same charming mix of unpretentious and profound. She told funny stories, introduced her work by saying “here’s a little poem” or “here’s a little song,”  like it was no big deal. She read from Just Kids as well as from her 2016 memoir M Train. She said she didn’t want to read much from Devotion—because it’s such a slim volume, it would be too much of a spoiler alert. The audience laughed.

My husband and I were seated in pews to the side of the stage. It happened to be right next to the door that she and Lenny Kaye walked through before taking the stage at 5:15 p.m. People were still taking their seats, and she hadn’t yet been introduced, but Patti just sat quietly on the stage while it all got sorted out. At 71, with, long silver hair and in a sharp black jacket, she still looks like herself, cool and unstudied, not concerned about what we all think of her.

I found myself overcome with emotion. Obviously I’ve seen Patti Smith perform before, but yesterday I felt so very fortunate to be in the same room with her, hearing her read, listening to her funny stories about making lettuce soup for herself and Robert Mapplethorpe when they were living together as starving young artists. She was so unbelievably charming and down to earth. And yet I was acutely aware that I was in the presence of a true artist, a supremely rare experience, despite the many concerts I have been to over many years.

This church seemed the perfect venue for the performance, considering the title of her book, Devotion, and the way she touched our souls. At one point, acknowledging a standing ovation, she said: “Palm Sunday and Easter are coming up. Make sure to give the pastor the same ovation.” (I don’t have the exact quote; I wasn’t taking notes, pictures or videos because I was too in the moment. I hadn’t even been planning to write about the show, but it was just so great I feel compelled to share.)

Reading a story about a boat that she and her late husband, Fred Sonic Smith of the MC5, had refurbished and parked in their front yard, Patti began to weep. I cried many times. At one point she had all in the church sing “I Can’t Help Falling in Love” together, and tears streamed down my face. My husband asked me why I had cried, what I had been thinking about, but I couldn’t really explain it.

Introducing the 1978 song “Because the Night,” she said that Bruce Springsteen had been working on the song, but was having trouble with the verses, so he allowed her to write them. Then she corrected herself, saying, she allowed Bruce to allow her to write them.

Patti closed by praising the young people who are planning the March for Our Lives on March 24. And then she played her 1988 song “People Have the Power.”  She reminded us all  that we really do have the power to make changes. Thanks, Patti.