I didn’t want to meet him. Ever. They made me.

I didn’t want to look this man in the eye. Or feel the touch of his hand. Or stare into his eyes. Or picture the man he was and the young girl I was when we first met.

I did not want to meet Mark Hamill.

I lived 42 years without having to imagine what it would be like to meet Mark Hamill. In the same way that I could not imagine meeting Steve Garvey of ’80s Dodgers fame or Paul McCartney. I met Bob Dylan when I was 17 and it nearly broke my heart because it was so unbelievable. I recently attended an Elvis Costello show and was relieved when he didn’t come out after the show before I had to go home and relieve the babysitter; it would have been too much.

But this time, they made me.

The season finale of season 11 of The Big Bang Theory has Mark Hamill in it. Square in it. A lot. Many many scenes. Like, prepare yourself to see him in a new light. As I have. He has got sitcom chops. Killer timing. A terrific sense of humor. 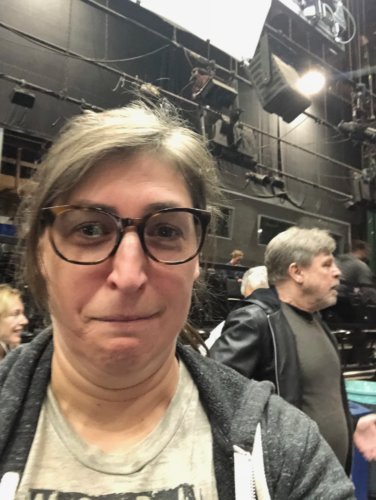 Mayim with Mark Hamill on ‘The Big Bang Theory’ set

When he came onto Stage 25, I saw him looking a tad lost; so many people, so much commotion as we all assembled–18 guest cast members!–for our final table reading of the season.

I started to cry inside. He walked toward the table. I strode as confidently as I could towards him in my workout clothing (I had just come from the gym) and I put my hand out and my breath caught in my throat as if I was meeting Prince Charming himself.

I started to say what an incredible honor it was to have him there and he wanted to say he watched me grow up on TV. And then I may have peed myself a little bit. I was so blown away and humbled by his presence. He was friendly. He had warm eyes. I loved him all over again.

As a lifelong nerd-I'm thrilled to be even a small part of @bigbangtheory– a show that's had #StarWars in its' DNA from Day 1. I had the same reaction meeting these 2 lovelies as @missmayim (fortunately for me I was wearing my #ESB #BactaBriefs at the time)😳 https://t.co/JEJ87gTvXZ

When our producer announced the guest cast at the table read, I clapped happily for all of the amazing guest stars. But when they said Mark Hamill’s name, I rose and clapped the way we do when a great Rabbi enters a room. I respect everything Mark Hamill stands for. So I stood for him.

I stood for my youth, for his beauty, for the hours I spent dreaming of being his wife–full disclosure, it’s been a long time since I dreamt about it, but still…–and I stood for the utter joy and disbelief I felt being in the presence of an icon of my generation and of a franchise that has transformed the lives of so many of us.

I can’t handle it!!! This is me after meeting @hamillhimself. Everything is great. 🎉🤯

My best friend told me I should not wear Star Wars-themed clothing and accessories every day of the week.

If I could, I would wear:

Friday: A black tight dress with Star Wars necklace of the planets

Monday: Tatooine shirt from Esther Kustanowitz (she got it at BustedTees.com)

Tuesday: All of it together

I feel literally unworthy to have met Mark Hamill. I didn’t want to meet him, but I am so glad they made me.

Just when you think this woman could not be more adorable, THIS happens!
🤣🤣🤣💕💕💕xoxo, mh https://t.co/MDSMUNeC5f