“The Consummation Deviation” dealt primarily with Raj’s insecurities surrounding the prospect of sex with his fiancée, Anu. Interestingly, I was originally supposed to have my younger son with me at the taping for this episode so that my ex could take our older son to a not-for-younger-kids Halloween train thing. Once I read the script, I called the ex and said, “Um….this is literally an episode I cannot have either of our kids here for!”

He said it was fine; the scary train thing wasn’t happening and there was no need for me to bring Fred and have him watch conversations about anxiety and performance during sex and such. If your 10- and 13-year-olds watched, that’s fine—they’re your kids!—but I personally would not have wanted to sit through those scenes with my kid. Too soon!

On the other hand, the plot revolving around Shamy this week was a sweet one. Sheldon makes an attempt to get closer to Amy’s parents. Amy is against it because she finds her mom difficult to spend time with and has been secretly telling her mom that Sheldon is the reason they don’t see her parents much. 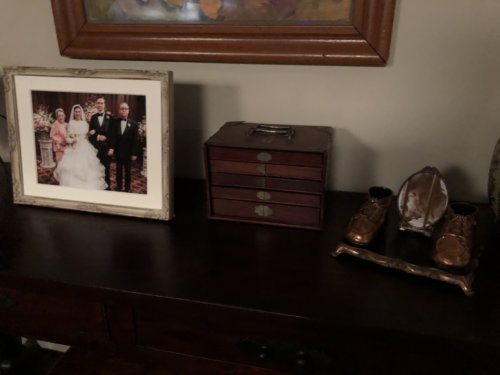 Amy isn’t nervous for the reason a lot of us might be nervous for our in-laws to spend time with our spouses. Many people are afraid their parents will say something embarrassing or revealing or weird about them to their partner. I felt that way a lot when I was dating people; I never wanted to leave them alone with my parents for fear my mom would bring up some weird family secret I would prefer to keep secret. Or my dad would share some obscure paranoid fear about the government or something. Mostly, I worried that my parents would do or say something that would embarrass me. I made sure to be ever-present.

But a funny thing happened as I got older and had more time in therapy. I realized I am not responsible for my parents. Their behavior is theirs. They are judged by their behavior; I am not. I relish the time my ex spends with my mom, and when my dad was alive, I loved that my ex would spend time with my folks when I was at work but his and the boys’ schedule aligned with my parents’ calendar.

Having in-laws is a lot about letting go, and in this episode, Amy is really forced to let go when Sheldon reveals to Amy’s mom how much time they could be spending together, which Amy is clearly preventing from happening. It’s a moment of reckoning for Amy and this line is huge. Amy says, “And it’s easier to say we can’t get together because of Sheldon than to admit that…I don’t want to.” That’s huge to acknowledge that we don’t always want to spend time with our parents.

So many people deny it and act like “everything is okay” when it’s not. Many of us get physical pain or suffer from anxiety or depression or get panic attacks; sometimes it’s our body and brain’s way of saying “It’s time to be honest.”

Amy is honest in this episode. And she gets to make it right by having her parents over. We will see what comes next and if her parents continue to be a part of the development of the Shamy couple.

And we will see if we get to meet Anu’s parents so we can see yet another kind of relationship dealing with in-laws!