I just returned from the Ukraine. I spent three days in the capital city of Kyiv (Kiev); two of which were spent on a sound stage for 14 hours. But when I was not on the sound stage, I explored Kyiv and found it a fascinating and beautiful city.

When I was told I was shooting a commercial in Kyiv, I was hesitant. I had heard about a lot of political unrest on the news surrounding Ukraine, but I knew very little and I had to do some research. The truth is, honestly, I could not have found Kyiv on a map if my life depended on it – I would have gotten close, but I literally had no clue where any cities I had heard of in Ukraine even were.

It might not sound so unusual to not know much about this part of the world since Americans tend to not know where anything is in the world – it’s part of our imperialist charm! – but I am half Ukrainian. And it stands to reason that if you are part Ukrainian that you might know a thing or two about the Ukraine. Actually, I found out on my last day in Kyiv that the city my Hungarian Grandmother lived closest to before the War now falls under Ukrainian territory. So technically, I am ¾ Ukrainian. Borders are funny that way. So is identity.

I know it sounds jarring to hear me talk about “The War” the way I do, and I – and many Jews – are often accused of wallowing in our persecution history and obsessing over suffering and the Holocaust. But here’s the deal: my grandparents’ lives were transformed by the pogroms and the Nazi regime which sought to eliminate Jews – as well as other groups – from the planet. This kind of genocide is unparalleled in history – my grandparents lived in a time when they literally had to run for their lives in order to live. And I grew up with this right up in my face: one grandmother who couldn’t talk about the war because she would start crying so hard that I would stop asking; my other grandmother denied her Polish citizenship and I only discovered the fact that she grew up in Poland in my 30s. My Polish grandfather had nothing good to say about Poland; he lived a life of persecution because of his ethnicity as a Jew. This is how disturbing this part of the world was for my family; I was raised to understand that our identity was always that of being distinctly and undeniably Jewish no matter the country we were trying to fit into.

And so when I found out I would be traveling to Kyiv, I was tentative. We fled from there; why go back? We used to roam these streets. We were citizens. We contributed. We ate Ukrainian food and we spoke Ukrainian (as well as Yiddish, of course) and we tried to be a part of. Cities like Lvov and Uman produced some of the greatest Rabbis and thinkers of our people. And in certain cities, Jews owned more than 75% of the stores. And when the Nazis came in, they shot tens of thousands of Jews in the course of days and threw their bodies in pits to rot.

And so what did it feel like to go back? It felt strange. And it felt amazing.

The people and the flavor of Kyiv is an incredible blend of “old world” and modernity. The men are exceedingly polite and respectful of women without being macho; there is a shyness and a ‘small town’ feel even though it is a substantial city. Waiters are direct and kind of bossy but in a really sweet way. Everything is very inexpensive and the dollar goes far there. Kyiv is not at all pretentious or fancy; it is a well lived-in city and it is urban for sure. It is Catholic but not in the way that Italian cities feel Catholic. Every street in the main part of the city is lined with trees and there are parks and statues everywhere and so many shades of red and green and yellow and blue on buildings towering over a modest and intelligent population of people who are still reeling from the pressures and oppression of Communism – people who have tremendous pride, faith and love for the same things we all desire: stability, happiness and success.

By going to Kyiv, a place my family fled, I got to return as an American. An independent woman. A scientist. A mother. A daughter. And yes: a granddaughter. I took my grandparents with me to Kyiv and my great-grandparents too. I am alive and my existence is their legacy. I am made of their DNA. I often wonder which one of my relatives could sing like me? Who made people laugh like I do? Who looked at their sons the way I look at mine? Who stood under a chuppah [wedding canopy] as in love as I was when I took my vows? Who laughed with their whole body when they found something funny? Who cried out when they witnessed injustice? Someone in my family did all of these things, once. And I am all of them now. I stand for them. I live for them. And I go the places they were kicked out of for them.

For thousands of years, this has been our story. And I will continue to spend my life returning again and again to these places – I have already been to so many but there are so many more – to show that we are still here. Once, our ancestors worked to support the economy of this country even though they were denied the benefits they should have received for their labor; now we return as tourists and employers and contribute to its economy to benefit those who were not forced to flee for their lives.

I would go again to Kyiv; but next time, I will also go for longer so that I can go other places. I want to go again to that part of the world – I want to keep going until I have been everywhere they sent us out from. I will one day go to Lvov and to Uman and I will go to Muncasz and to Suvalki and to Bialystock and to Odessa and I will do it joyfully and gratefully. As an affirmation of the simple fact that I am alive as a Jew; and as the greatest act of retribution I can conjure: the act of being me in a place that tried to stop me from even existing.

I am here. Thank you, Kyiv for bringing me back. 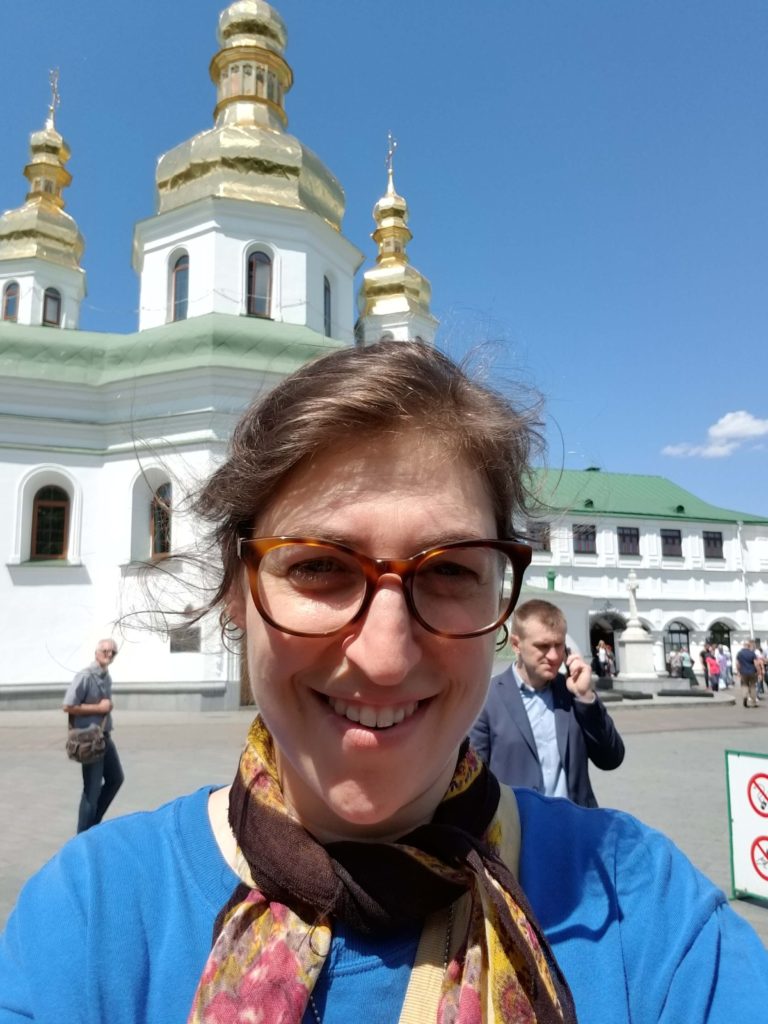 Read More From Mayim
Explore These Topics: Holocaust Travel
More Like This: