The power of water—both in nature and our imagination—became overwhelmingly evident to me on a recent visit to Hot Springs, Arkansas. Situated in the Ouachita Mountains, this tourist city lies within the Hot Springs National Park. The historic bathhouses, hotels and museums are secondary to what have long brought people from around the world to the charming spa city that’s called America’s First Resort: the thermal spring waters that give Hot Springs its name.

One of the first stops during my visit was a tour of the historic Arlington Hotel & Spa, which has been hosting guests since 1875. Thermal bathhouse water is directed from the spring beneath the hotel for guests to enjoy. I visited Al Capone’s former residential suite on the fourth floor, where he could easily spy on the goings-on of the once gangster-filled city. On the tour, I learned that guests who choose to stay in that suite can bathe in the same bathtub Capone once used in attempts to cure his syphilis. Surely that selling point wasn’t exactly the most tempting one, but I was intrigued to learn just what the hot springs were all about.

In the mid-19th century, some of the most well-respected and highly esteemed doctors in the country started to proclaim that hot springs in the area had healing powers. They would recommend their patients visit the mineral-rich hot springs in Arkansas, claiming the thermal spring waters cured everything from cancer to paralysis. People would flock to the area from all over the country in search of cures for whatever ailed them.

By the early 20th century, ornate bathhouses were erected to cater to visitors who wanted to partake of the waters. Many of those bathhouses have been restored and can now be visited on Bathhouse Row in downtown Hot Springs. While walking along the Row, I felt a glimpse of what it must have been like coming to the city 100 years ago. I strolled past historic buildings as steam from the thermal waters made its way across the sidewalk behind a bathhouse. 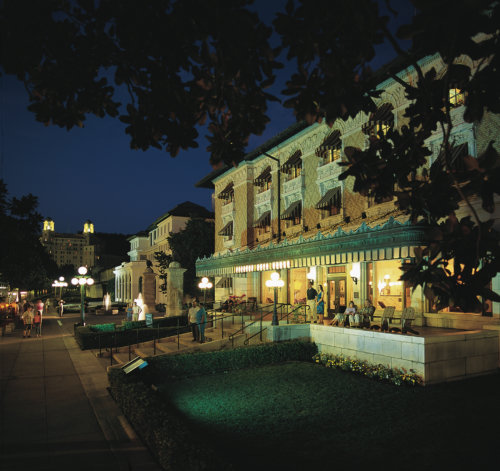 Bathhouse Row, where you can find a host of hot springs-fed spas. Bill Solleder

The meticulously restored Fordyce Bathhouse has been turned into a visitors center and museum. I marveled at the elaborate stained-glass ceiling that still greets visitors more than 100 years later. It was easy to see why Downtown Hot Springs is preserved as the Central Avenue Historic District and is listed on the National Register of Historic Places.

It’s important to note that the history of the healing powers of the thermal waters goes back much further than the bathhouses of the 19th century. For centuries, Native American tribes would go to the area to bathe in the springs and called the area the Valley of the Vapors. It is believed that the Choctaw, Caddo, Quapaw, and other American Indian tribes used the springs for restorative and healing purposes. It was also a neutral area among warring tribes where all could enjoy the waters in peace. In fact, Native Americans used the spring waters for more than 8,000 years before the thermal waters were appropriated and used by European Americans for the past two centuries.

Although we now know that the hot springs don’t have the powers to help someone recover from a paralyzing illness, soaking in the water from the springs can certainly feel refreshing. Some research has been done recently that links hot baths to relief from depression, and it may also help promote better sleep. However, there’s no concrete scientific proof of the medical benefits, but that doesn’t stop folks from heading down to enjoy the springs. 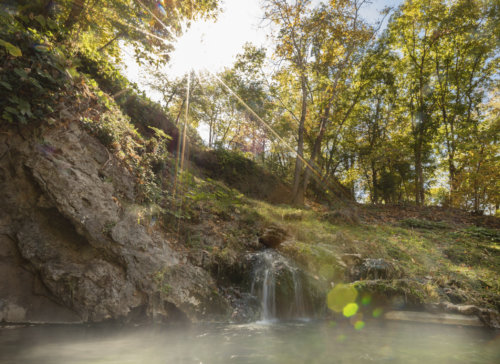 I was awed by the view from the Hot Springs Mountain Tower that looks out on the national park surrounding the city. I got more than a glimpse of the natural springs that supply the thermal waters for the hotels and spas in downtown Hot Springs. I savored the sight of boldly colored, fragrant blossoms in the Garvan Woodland Gardens that lie on a peninsula on Lake Hamilton.

The Anthony Chapel in Garvan Woodland Gardens stunned me. I have been to many churches, but never have I been in a spiritual haven that felt so closely connected with nature. With its floor-to-ceiling glass walls, you can see the majestic oaks, pines, and other trees and lush greenery from anywhere in the six-story-tall chapel. The striking wood columns branch and form an overhead lattice, and everything about the chapel seems designed to immerse oneself in the majesty of nature. I had to go off on my own and say a silent prayer as I took it all in.

Vegan eating was a breeze in Hot Springs. The Avenue—a southern artisan-style eatery inside The Waters Hotel located downtown—served up a vegan dessert complete with coconut milk and edible flowers that I still think about. Dinner at Deluca’s Pizzeria was handmade, New York-style vegan pizza with a mouth-watering crust. The good-natured owner Anthony Valinoti went out of his way to make sure a vegan friend and I were well-fed. I enjoyed a vegan sandwich and the best root beer of my life that was brewed at the Superior Bathhouse Brewery, a brewery that uses thermal spring water as its primary ingredient (Hot Springs National Park also has the distinction of being the only national park with a brewery).

It was an unforgettable trip. From the sight of the mountains from the lookout tower to the smell of the blossoms at Garvan Woodland Gardens to the sensations of the thermal waters, my experiences in Hot Springs will stay with me. Thanks to all the history I learned while there, my imagination also wanders back to what it must have been like to visit the natural area at a time when the place was known as the Valley of the Vapors or how it must have felt to come to the hot springs for a cure for illnesses. Also, I still daydream of the crust on that vegan pizza.