I had the exciting opportunity to preview the new film First Man for Grok Nation! It’s out in theaters today.

Don’t worry: There won’t be any spoilers here, especially since this movie is about a historical event, so it’s hard to spoil anything! First Man, directed by La La Land‘s Damien Chazelle, is about Neil Armstrong, the first human who lands on the moon. So in the film… he gets to the moon! Hahaha.

I actually didn’t know what First Man was about before I watched it, but since I love movies about space and space travel, it was a lovely surprise! This is the kind of movie that takes a historical event and shows you the personalities behind the headlines.Ryan Gosling, who plays Neil Armstrong, does a beautiful job portraying a man with a complicated emotional history given the tremendous pressure of going where no man had ever gone before—literally. Claire Foy as Janet Armstrong does a really terrific job conveying the mixed emotions which the wife of the first man on the moon must have had. She is proud, she is scared, she is protective of their kids; she is also resentful of the toll this life takes on their family.

The supporting cast is also stellar: Kyle Chandler and Jason Clarke, who played astronauts Deke Slayton and Ed White held their own as stars while playing really compelling supporting roles. The entire ensemble cast, including Pablo Schreiber and Christopher Abbott, really made the film come together for me. 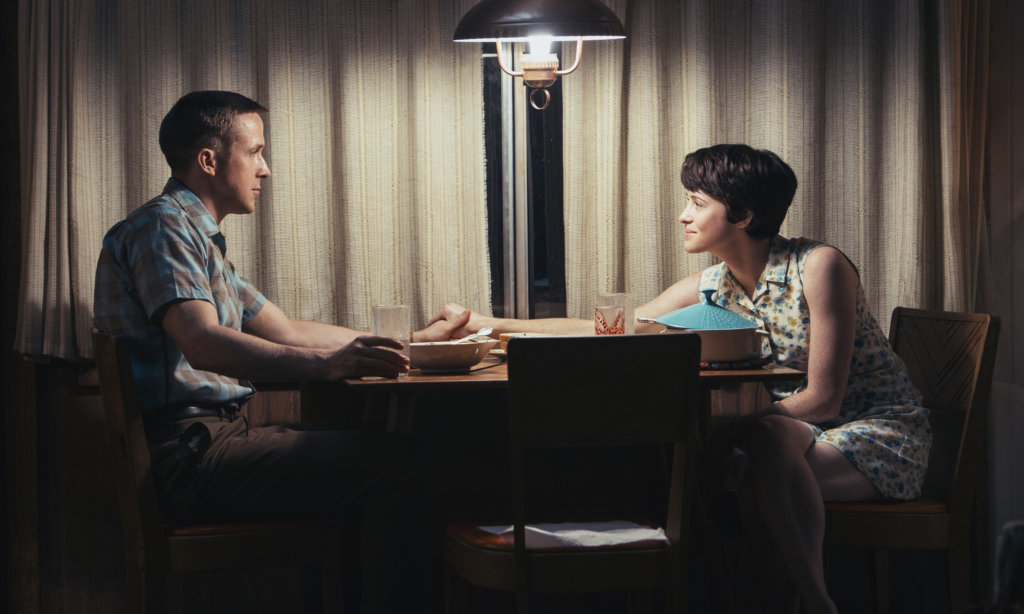 The movie perfectly depicts the 1960s. Cinematically, it looks as if it’s a documentary; from the costumes to the lighting to the fashion to the sets, it’s really perfect. The effects are super impressive, and as a fan of space movies aplenty, First Man impressed me largely because it captures so accurately the rudimentary 1960s technology that helped America make history with a moon landing. It is really mind boggling and the movie portrays it beautifully.

I highly recommend this movie for older kids as well as grown-ups. There is one F-bomb and some emotional intensity, but I think it would be awesome for older tweens and teens to watch, even if they may not think they have an interest in space travel. It’s a story of patience, perseverance and courage.

I’d also like to give a special shoutout to the cinematographer and sound department. The wonder of space travel has certainly been captured before on the big screen. However, the way First Man captured it in a way that also captures the wonder of the era felt really special. I felt as if I were experiencing it for the first time in history—the way the characters were. There was something about the lighting and the way the surface of the moon was revealed that made it feel so real. Also, the sound department worked their tushies off in this film. There is a lot of contemplative quiet to highlight the visuals and it really made an auditory impact and underscored the sense of wonder: the wonder for space travel, space itself, and really our existence as humans in a universe that we get to explore.

So I hope you’ll go see it this weekend, and let me know in the comments below what you think!