We’ve all had that friend who is constantly making poor decisions. Each time they tell you a story, you can’t help ask, “But, why?” Yet there is something we can say about these friends: They have some entertaining stories.

I am that friend. I’ve gotten in a stranger’s car at 2 a.m. when I was lost in the streets of NYC, I’ve bought cheap lip injections from Groupon, I decided to breed my pet snakes, and many more dumb things that I probably shouldn’t admit to on the internet.

One bad decision I’m willing to admit to, though, is how much I love trying ridiculous diets. It’s very, very common knowledge that fad diets do not work. I read Shape, Women’s Health and other magazines that tell me this. I follow countless nutrition and fitness Instagrams that preach the benefit of moderation and consistency. I know this is true—but when I read about a Donut Diet or the Sexy Pineapple diet, the poor decision-maker in me just can’t help but be intrigued.

Recently, I started reading about vintage diets. Did you know Jackie Kennedy would often (allegedly) eat only a single baked potato with caviar and sour cream in a day? Celebs and I are the worst at fad diets. Anyway, I came across one that sounded right up my alley: The Drinking Man’s Diet. 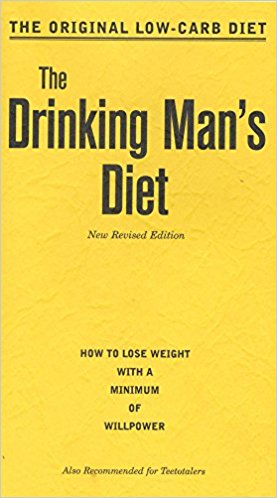 The Drinking Man’s Diet was created by Robert Cameron in the 1960s for … men. I am not a man—but I wouldn’t let some man (who was not a doctor or a nutritionist) stop me from trying his diet because of my gender. The ebook cost me a whopping $2.99 on Amazon. It was a very popular diet in its day—Dean Martin read it—and it sold more than 2 million copies in 13 languages.

Of the diet and his lifestyle, Robert once said, “I was never hungry and never missed a martini.” If that isn’t a meal plan for a bad decision maker like me, I don’t know what is.

The basis of The Drinking Man’s Diet is similar to most low carb diets (Robert later took issue with the Atkins diet being “revolutionary” as his brilliant idea came first). But unlike the low-carb diets most of us know, there are a few differences: You can eat any meat or cheese you want—no low-fat restrictions here! And instead of avoiding all carbs, you are to limit your carb intake to 60 grams a day. The fact that it’s a set 60 grams, no matter the dieter, is one of many, many red flags.

Now, the biggest exception to the low-carb diet is that The Drinking Man’s Diet allows—and promotes even—drinking hard liquor. Robert had a pitch I couldn’t say no to: “Drinkers of the world, throw away your defatted cottage cheese and your cabbage juice, and sit down with us to roast duck and Burgundy. You have nothing to lose but your waistlines.” He also explained that the high fat content would keep you from getting too drunk, so much so that a person could “keep up with the Russians.”

Who could say no to that? So Sunday night I made a meal plan to start this ill-advised diet. (Seriously, don’t try this at home. I’m certain it’s very unhealthy.) I intended to do it for two weeks, but here’s what actually happened…

Monday
So much for meal planning! I realized Monday morning that I didn’t actually have any groceries, so I let myself eat carbs for one more day. Off to a good start!

Tuesday
After grocery shopping, I was truly ready. I had some hard boiled eggs and spinach for breakfast, a salad for lunch, and a pre-dinner martini. I had a realization while drinking my martini: As much as I love alcoholic beverages, I’m not the biggest fan of hard liquor. So these two weeks were going to go great. For dinner, I cooked broccoli and cheese stuffed chicken. I don’t pride myself on being a cook, so it was no surprise when my chicken was undercooked and gave my sister food poisoning.

Wednesday
I had hard boiled eggs again and leftover chicken (that I nuked extra long in the microwave to hopefully cook out the food poisoning). I had some whiskey on the rocks when I got home from work to fill my very empty stomach. I added lots of ice cubes and waited for them to melt so that it was palatable. I wasn’t feeling chicken or fish, so I rolled up some lunch meat and cheese with mustard.

At this point, I was only two days in and already feeling pretty low energy. I was in bed by 9:30, but at least I wasn’t eating those evil carbs!

Thursday
I switched breakfast up because I forgot to boil eggs and had some low-carb Slimfast. I had another deli meat rollup, plus a salad, for lunch. After work, I went to Whole Foods and bought a rotisserie chicken for dinner because I needed some sustenance and was honestly too tired to do my own cooking. But I did whip up some cheesy mashed cauliflower as a faux potato, but it just tasted like cauliflower.

Friday
Thank goodness I had the day off on Friday because I was really lagging. I ate some plain greek yogurt for breakfast and lounged on the couch all morning. A couple hours later, I made a martini. The book suggested having a martini during lunch, so I felt like it was necessary at least once. I ate some deli meat and laid on the couch some more.

Then I thought about pizza. And it just sounded so unbelievably good. I decided that three and a half days of the Drinking Man’s Diet was enough. So I ordered Domino’s and drank the rest of my martini with a side of cheese pizza. It was the best cheese pizza I ever had.

I did weigh myself on Friday morning, before the Domino’s, and I had lost five pounds—but I guarantee I’ve already gained it all back. So would I recommend this “diet”? Absolutely not. Will it stop me from trying fad diets in the future? Probably not. But I did learn one thing: Pizza tastes even better after three days of deli meat and martinis.

Have you ever done a ridiculous diet? Are you a person who eats moderately all the time and can teach me how to be a better person? I’d love to hear in the comments!