I’m a fan of Stephen King. When I hear that there’s a project in the works involving him in any capacity, I perk up. King is such a prolific storyteller, specifically in the world of horror/suspense, that his name itself can function as both verb and adjective.

Stephen King
(v) to scare someone so profoundly, as to leave lifelong emotional scars
—Example: “Oh man, I Stephen Kinged my little brother so bad he has PTSD.”
(adj.) fucked up, talented, earwig
—Example: “Susannah, you don’t want to date that guy. He’s so Stephen King. He’ll make you want to call your mama in the middle of the night so she can tell you there are no monsters under you bed, but instead she tells you, ‘There ARE monsters under your bed, so you best get the fuck out of the house now!’ “

I’m also a fan of J.J. Abrams. When I hear there is a project involving him, I tend to see just how involved he is before I invest. By that I mean, I want to ensure quality control before I invest. His vision is bold, broad and consuming (my favorite kind of vision). It can also be easily spoiled by too many cooks adding their own mystery meat just to see how far the rabbit hole goes. Abrams, like King, can also function as a verb and adjective.

J.J. Abrams
(v) to cause a previously rational person to lose their mind, to bring about a nervous breakdown from unrelenting anxiety, to question things endlessly.
—Example: “I watched Lost and I JJ Abramed so bad I was in therapy for a year.”
(adj.) Alice in Wonderland, talented, like a lens flare.
—Example: “I went out to celebrate my promotion, had too many drinks, and woke up feeling JJ Abrams all day.”

So when the trailer first dropped for Castle Rock—a collaboration series between the two—I squealed. It promised me and other Hulu subscribers some yummy gummies. There would be: MYSTERY! SCARES! THOUGHTFUL RUMINATION ON PAST MISTAKES!  CREEPY PEOPLE! CASTLE ROCK MYTHOLOGY! MIND NINJA-ING!

If you somehow missed the now numerous trailers, here’s what you need to know: The 10-episode series, airs weekly on Hulu starting Wednesday, July 25. Castle Rock is the name of a New England town where many of his works have been set, including Cujo and Needful Things. It “combines the mythological scale and intimate character storytelling of King’s best-loved works, weaving an epic saga of darkness and light, played out on a few square miles of Maine woodland.”

Like most of King’s best work, the plot of the series is a mystery, but what we do know is that it stars many former King universe stars and revolves around the lives of Henry Deaver (Moonlight‘s André Holland), a death row attorney, and an inmate at Shawshank Penitentiary (It‘s Bill Skarsgard).

I went into the series thinking, “Yes! Bring it, Stephen King and J.J. Abrams! Shawshank/Lost my last few nerves!” Cut to four screener episodes later, and though there is certainly promising momentum, this girl is still waiting to be Kinged and Abramed. But that’s not to say I’m giving up—let me start with what’s effortlessly right about Hulu’s buzzy new show… 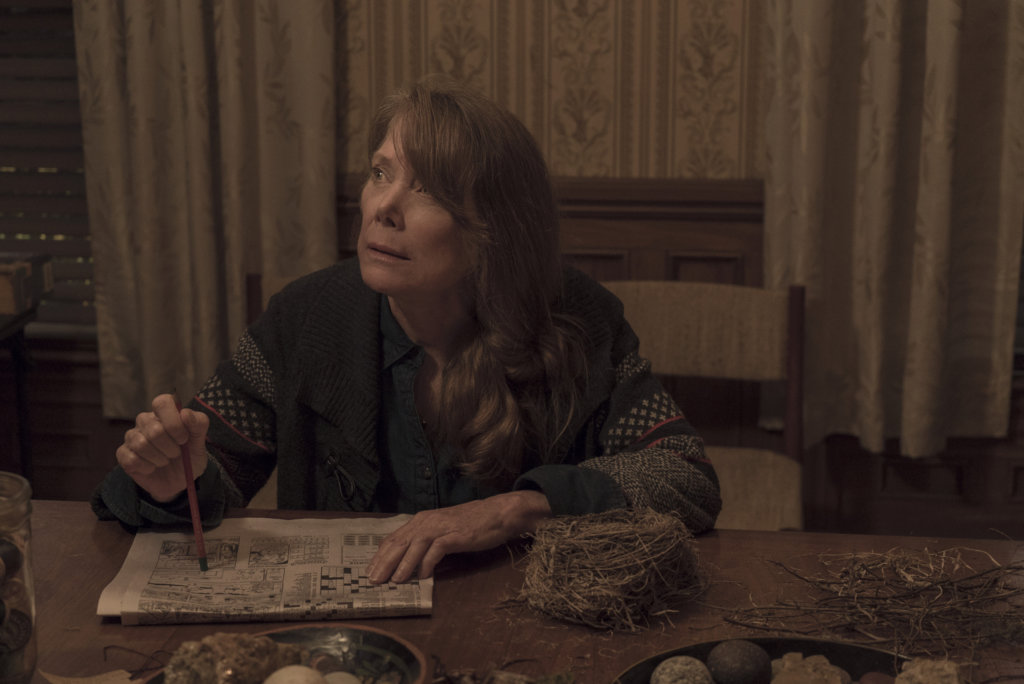 Sissy Spacek. I could just leave it at that because Spacek is always, repeat, ALWAYS brilliant. But I feel I need to be more effusive with my praise here. The moment she appears on screen, I’m instantly impressed—while also nervous about what she is going to do with the scenery. I mean Spacek can chew scenery better than just about anyone. She’s like Ms. Pac-Man. CHOMP, CHOMP, CHOMP she goes, swallowing up dots, like a QUEEN. Here she’s dealing with her aging mind, her desire to die on her own terms and her buffet bar of resentment toward her son Henry Deaver (Holland). With her iconic role as Carrie, in Stephen King’s classic by the same name, looming, there’s a palpable tempest waiting to lay waste to everything and everyone in Castle Rock. BRING ON THE PIG’S BLOOD!

Scott Glenn. Sigh. When has he ever been anything less than full-tilt awesome? I mean, Kevin Garvey, Sr. in The Leftovers anyone?? (If you’ve never watched The Leftovers, please correct your honest mistake and watch it—after you finish my article of course.) Like Spacek, he elevates anything he’s in just by showing up. I wonder if his voice is available on Waze. “Turn right on Fountain, if you know what’s good for you. You missed your turn. I’m disappointed in you. Recalculating.” Oh man, his face, his eyes. He seems like he’s seen everything and knows where all the bodies are buried. And as his character Alan Pangborn builds a fence for his love Ruth Deaver (Spacek), I wonder if there’s one buried in her backyard.

Melanie Lynsky. I’ve been a fan of Lynsky’s since her powerhouse debut as Pauline Parker in Heavenly Creatures. In Castle Rock, she plays quietly tortured and empathic real estate agent Molly Strand. Much like her character in Heavenly Creatures, she’s deeply connected to her childhood friend (Henry Deaver), to the point of near insanity. She is driven to violence as a result. Now that I think about it, I could argue that Pauline Parker and Molly Strand are the same person. Could Peter Jackson’s Heavenly Creatures be in a parallel universe to the one created by J.J. Abrams?! I love J.J. Abrams!

So, yes, there’s plenty that is working for me, including the atmosphere, the music, and the return to Shawshank prison. But the things that aren’t working is what’s stopping me from truly investing in the show.

For starters, Lost‘s Terry O’Quinn—who plays Dale Lacy, the warden of Shawshank—does the voiceovers. And they feel tonally off. Whenever he talks, I feel like I’m watching Fried Green Tomatoes. I love that movie, but I’m aching for Morgan Freeman in The Shawshank Redemption. “I miss my friend,” indeed. I’m a fan of Terry O’Quinn as well (John Locke forever!), so I hope this changes soon, or that I accept it if it doesn’t. 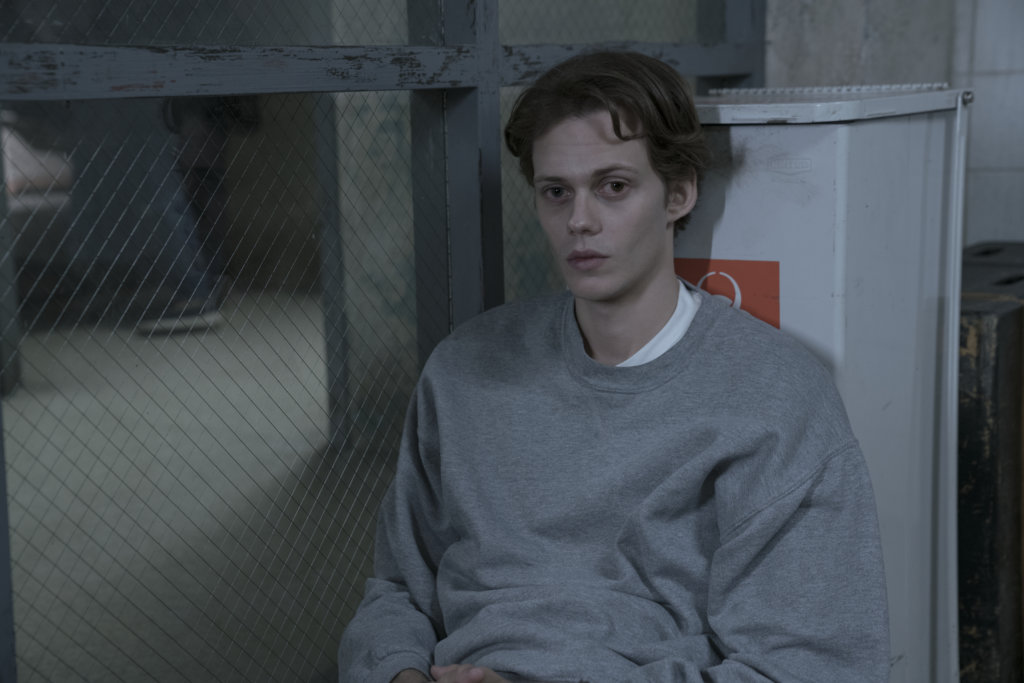 Then there’s the Dude in the Cage/Shawshank Prisoner (Skarsgard), who stares a lot and talks less. My problem isn’t with Skarsgard, or the character itself, but with the lack of direction he’s given. If he is meant to garner empathy, or sympathy, I’m not feeling it. If he’s “evil incarnate” as the warden tells us, I don’t see that either. Without knowing what’s at stake for him and characters with whom he’s interacting, how am I to invest in the outcome?

And, lastly, we have the Henry Deaver problem. This one is the most baffling to me. I’ve enjoyed Holland’s work in everything from Moonlight to 42. But watching him in Castle Rock, I can’t help but feel he’s someplace else. He shines the most in his scenes with Lynsky and when he’s observing the racism and desperation in his hometown. Businesses and townsfolk alike are shut down. Castle Rock is a collective space for all the evil that we inflict upon one another and he sees that…. mostly. He can’t run from it, and neither can the Dude in the Cage.

When Henry Deaver and Dude in the Cage meet, there should be fireworks, or at least a dime-store sparkler. Instead, it’s where the whole thing falls apart. You know when you blow air into the paper of a straw with the hopes of it hitting the person’s face right in front of you? It kind of goes straight for a second and then it just fizzles out and lands on the ground. Then you’re bummed cause not only did you miss your target, but also, now you have trash to pick up. It’s like that.

Both characters keep everything close to the chest, which isn’t bad, but after four episodes I need one or both of them to cough something up. I need to see more Carrie anguish. Or give them the Green Mile treatment and glow green. Again, I feel this is direction and not the fault of the actors. I need to know who to root for, or at least a hint. Right now I don’t and that’s a problem.

Throw me one of your many buried bones, Castle Rock writers. Pretend I’m Cujo. I know there’s an inner Cujo in all of these characters. We all have an inner Cujo that needs to be released in a safe space.

But, regardless, I’ll keep watching Castle Rock because it’s Stephen King and J.J. Abrams. And when it comes down to it, I want to call my mama in the middle of the night so she can tell me there are no monsters under my bed, but instead she’ll them me, “There ARE monsters under your bed, so you best get the fuck out of the house now and end up in therapy for a year questioning my very existence!”