Walking the halls of Comic-Con, you really get a sense of how passionate fans can be. The crowd swirls with brand-specific enthusiasm: aficionados of video games, Marvel and DC superheroes, buzzy sci-fi and fantasy television shows, and of course, the con’s namesake… comics. The crowd can be a chaotic horde, a group of LARPers, a marginalized and ostracized band of burnouts, or a united front for activism, truth, justice and what we hope is still the American way.

I was at the panel “What Rebellions Are Built On: Popular Culture, Radical Hope and the Politically Engaged Geek” mainly to see Annalise Ophelian, creator of the Looking for Leia film, which is now slated to be a six-part series, examining the empowering influence of Star Wars on female fans. But I had also heard about the Harry Potter Alliance, a group which draws its narrative influence from a fictional magical realm, but whose members are working actively–through non-magical means–to transform the world.

It was such a great panel, and if you don’t want to watch the entire thing (video below), here are a few highlights:

Jennifer K. Stuller, a writer, popular culture critic, and historian who writes on female representation in comic books, TV, and movies, was the panel’s moderator: “Welcome, rebels! This may indeed be the darkest timeline, but we have hope. Geektivism is a radical and unapologetically enthusiastic merging of geek culture with activist endeavors. We are Groot. We are stronger when we are together…forming Rebel Alliances.”

Annalise Ophelian, creator of Looking for Leia, spoke about the process for launching her Star Wars fangirls film: Annalise has been a Star Wars fan since 1978, when she saw the film in theaters 11 times and dressed as Princess Leia for Halloween. After attending a number of Star Wars gatherings, Annalise found so many women expressing their fandom that she began working on Looking for Leia, with the aim of showing it to Carrie Fisher. However, she started pre-production in August 2016, and Carrie Fisher died that December.

“When Carrie Fisher passed, I thought, this project has passed with her. But my partner said, ‘this is an important time to talk with women in fandom, around losing creators and makers who we never met but who created a thing that got us through a time.’ It was reconceptualized as participatory fandom through a different lens.”

Annalise and her crew spent 18 months on the road at conventions, interviewing 100 women with a focus on diverse voices. Looking for Leia is now in post-production and is expected in early 2019. 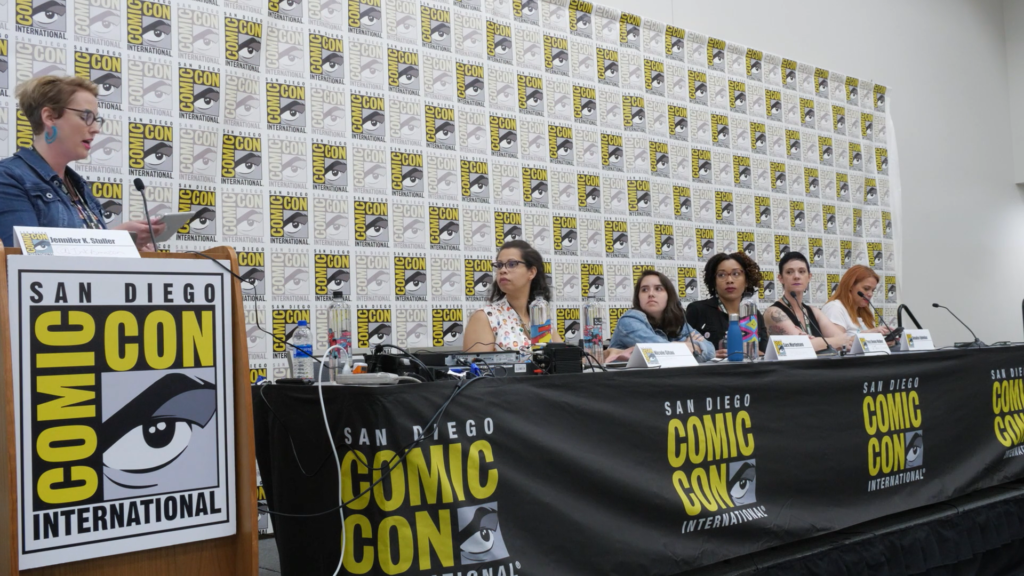 The ‘What Rebellions Are Built On: Popular Culture, Radical Hope and the Politically Engaged Geek’ panel at San Diego Comic-Con 2018

Nicole Gitau, president of GeeksOut, spoke about empowering the queer geek community: “People are hungry for queer fandom content, to see ourselves in other people. Wherever your geekdom lines up with wanting to get away from your keyboard, we’re there,” she said.

GeeksOut is a nonprofit that rallies, empowers and promotes the queer geek community through monthly meet-ups and larger events such as FlameCon, an LGBTQ-focused Comic-Con.

Tracy Deonn Walker, a North Carolina-based author, scholar and geektivist, talked about cosplay, the power of hashtag activism and the value of in-person meet-ups with fans of color: Tracy has been studying hashtags like #GeekGirls and the #WheresLeia, #WheresRey, #WheresGamora campaigns to mobilize action around the availability of female action figures for sci-fi and comics-based franchises. She is also connected to Color of Fandom, a North Carolina-based meet-up group with 350 regional members that holds 80 meet-ups a year. She spoke about the importance of fans of color having a space to gather in-person: “Seeing other fans that look like you in a physical space is a big deal. If you haven’t had that experience, it’s powerful.” Tracy also spoke about cosplay as Performance Studies, a discipline that assumes that “doing something is a way of knowing. Embodied knowledge is a thing. Starting from that space, it’s an intimate radical resistant act to take a costume and wear it,” adding that there is “knowledge you gain in the skin of that character. Making the choice to be personally empowered feels very radical right now. Cosplay [is a tool] to feel stronger and more heroic, to play with the narrative outside the original source.”

Sara Mortensen, a volunteer and writer for The Harry Potter Alliance, explained how the HPA uses story and pop culture to engage people—especially young people—in social activism: HP Alliance chapters have implemented campaigns like an international book drive that yielded between 7,000 and 10,000 books sent to Puerto Rico, and a successful effort to have Warner Bros. change all its Harry Potter chocolate products to fair trade. Their World Without Hermione campaign asks fans to imagine what Hogwarts would be like if girls couldn’t attend school and Hermione Granger hadn’t existed in the Harry Potter narrative. And an annual four-day conference for leadership and activist training of people of all ages and experience levels is called the Granger Leadership Academy. They also have a positive fandom campaign to combat toxicity, especially online, which includes guidelines to put into daily practice to make fandom spaces safe, constructive and positive spaces. “We view everything through a positive lens,” Sara said. “What’s going on can lead to hopelessness but the weapon we have is love. We can harness the love and hope we have to create social change and do good in the world.” The HP Alliance campaigns may also center on non-Potter pop culture franchises, such as The Hunger Games and Marvel, “and anything that’s exciting and big in fandom at the moment,” Sara said.

Chase Masterson, actress (Leeta on Star Trek: Deep Space Nine) and founder, Pop Culture Hero Coalition, shared her organization’s origin story: The Pop Culture Hero Coalition is the 1st 501c3 organization to use stories from TV and film to rise against bullying, misogyny, LGBTQIA-bullying, racism, and cyberbullying. In 2010, a little girl named Katie was bullied for carrying a Star Wars lunchbox, and boys told her that girls can’t be Star Wars fans. The girl’s mom, Carrie Goldman, tweeted out a call for encouragement that Katie should be whoever she wants, like and love whatever or whoever she wants. The initiative went viral, drawing a number of Star Wars-related and other celebrity responders, including Masterson. Masterson had also been volunteering for Homeboy Industries, a company that gives employment and support to people who have recently been released from jail. “They all got there because they’d been bullied, and they made gangs to stand against the bullies, then those gangs were absorbed into the Crips,” she said. “[Bullying] is oppression that does not belong in our lives. Let’s form a coalition to end bullying using pop culture stories.” Masterson called the United Nations to be part of the coalition and invited them to come to Comic-Con, and they did: The rest is Pop Culture Hero Coalition history.

At the end, panelists were asked for some characters and quotes that inspire them. Sara stuck to Harry Potter, quoting Hermione, “I’m hoping to do some good in the world.” And Annalise gave two quotes from Star Wars characters: Rose Tico’s “This is how we win: not fighting what we hate, but saving what we love,” and also Poe Dameron’s “We are the light that will spark the fire that will burn the First Order down,” indicating a need for love, “but also direct action and policy change.”

Through fan communities, people can unite in shared purpose to make a real impact. We have to thank the creators of these worlds, who tapped into something so relatable that it developed into a fandom, a crowd of people who are powered up to be the superheroes that we need in the world. Pop culture serves not only as a reflection of where we are, but can also be an amplification of the best parts of us, the heroic attributes that will forge a better future.

Check out the whole panel here:

What Rebellions are Built On – SDCC 2018 from What Do We Want Films on Vimeo.