As women, we are living in a society that makes it exceedingly difficult to not just be ourselves—but to love being ourselves. In fact, according to an eight-year study done by Wiebke Bleidorn, Ph.D., from the University of California, reported in the Journal of Personality and Social Psychology, it found that across the board, no matter the culture or country, men had higher self-esteem than women. That stings, right?

But it’s really no wonder. While one can argue that women are genetically hardwired differently than men, and we possess different sets of traits, we can’t ignore the obvious: Messages everywhere directed at women, plastered across magazines with advice on how to “think like a man” haunt us. Books telling us we need not be nice if we desire a corner office, and others telling us that men love bitches. Those messages are mixed with other stories telling us to be soft, and vulnerable. We are expected to embody countless contradictions. On the one hand, badass women are supposed to climb the corporate ladder, crush their competition and be ruthless in their careers. And yet we’re also told to be feminine goddesses at home. It’s overwhelming—to say the least.

A quick Google search on “how to gain confidence” will flood us with the notion that we’re essentially screwed when it comes to learning how to feel good about ourselves and build our self-esteem. We are constantly inundated with messages that we’re not enough, and that we are broken messes that need fixing. And it’s destroying us. We are criticized and made to think that we need to be more masculine in order to command respect and develop our self-worth. We’re made to believe we need to have a hard, emotionless shell when it comes to feelings and relationships, and an aggressive attitude in the workplace.

So what’s a woman to do on her quest to self-confidence? Does she really need to think like a man to be happy and successful? I have a groundbreaking idea: What about just being ourselves?

Ironically, being authentic doesn’t come easy to many of us. One would think simply being themselves would be a natural trait. Most of the women I’ve worked with as a master life coach have been incredibly talented and successful, but they still struggle with unapologetically being themselves. And I’ve experienced it, too. A few years ago, I decided I wanted to dye my hair pink—at 36 years old. This decision did not come easily. I thought I might not be taken seriously anymore as a professional, or people would think I’d lost my mind. Would a man struggle with those thoughts? Probably not. But rather than convincing myself I had to think like anyone else other than myself, I confronted my worst fears: What if people did think I was crazy? Or unprofessional? What was the worst that would happen? Absolutely nothing. 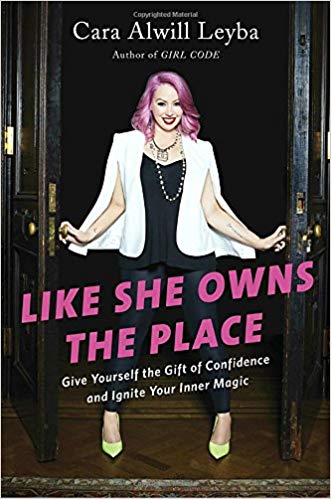 Eventually, I pushed past the anxiety and embraced my wild candy-colored desires and, as you can see on the cover of my latest book (right), my hair is indeed pink. And it was one of the biggest and boldest ways to express my own individuality, and ultimately build my own confidence.

The exercise I used on myself is one I’ve used with many of my clients, and I urge you to use it, too, if you want to become comfortable using your own superpower: your intuition. Ask yourself this simple question: What am I giving up if I don’t be the woman I want to be? What do I have to lose by not following my gut? Most of the time, that answer alone is enough to get us in that salon chair, or drafting up those divorce papers or marching into our boss’ office to tell him we are done.

Cara Alwill Leyba is the author of Girl Code: Unlocking the Secrets to Success, Sanity, and Happiness for the Female Entrepreneur and Like She Owns the Place: Give Yourself the Gift of Confidence and Ignite Your Inner Magic, which releases July 10. Her latest book helps readers rewire their minds to become their best selves at work and beyond.