Well, friends, this is it. The final write up for my time on The Big Bang Theory. The last two episodes of the show aired yesterday in what was likely an hour of many mixed emotions—for you as viewers, as well as for me when we filmed them.

The most notable and memorable thing from last night (besides the fact that it was our FINAL episodes of the show) was the fact that Amy finally got a makeover! Woohoo! I’ve waited a long time for this—nine years to be precise—and it was even better than I could have hoped for.

I have mixed feelings about Amy’s motivation to have a makeover; I would have rather it have been something fun that she and the girls did, but the writers made the decision to explore Amy having a sudden and profound distaste for her frumpiness. Despite the motivation, the makeover ended really positively, with Amy getting a short, wavy haircut! 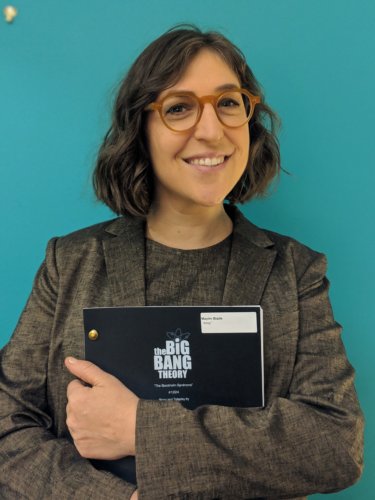 For the first of the two episodes that aired last night, I wore a “fall,” which is kind of a half wig that starts halfway back on your head. The reason we couldn’t actually cut it for that episode is that we also had to film all of the scenes with Amy having her regular long hair and there simply wasn’t time to have it cut in time. So what you see is a fall in the first episode and all me in the second!

I love the clothes they chose for Amy’s makeover a lot. Amy has a tendency to dress up fancy a lot, doesn’t she?! I like it, and I like that in the final episode (which takes place 2 months later), she doesn’t grow her hair back the way Sheldon wants her to; I imagine she decided to stick it out and he adjusted, and that’s pretty cool as a backstory!

The Nobel plot unfolds rapidly, and we end up in Sweden on the Nobel stage, incredibly decorated by our design and art departments to look pretty much exactly the way the actual stage does. I loved the extras in this scene; they looked gorgeous, and it was so much fun filming with everyone dressed up in tuxedos and such.

At the end of our second to last day of filming, Simon, Kunal and I left the Nobel stage (we filmed on an entirely separate stage down the block from our usual stage) and walked back to our dressing rooms on Stage 25. Simon remarked that it felt like we were in the nightmare you might have about the last episode. It was night. We were virtually alone on the WB lot and we were all fancy, me in my gown and the guys in their tuxedos and it was just so…eerie. He was right. It felt like a bad dream. But indeed, this was it.

We completed all of our pretaping earlier in the day, before the final taping in front of a studio audience. The scene between Amy and Sheldon where she tells him off was the last one we filmed before we got ready for the audience to come in. It felt fitting. Sheldon is finally confronted by the person he is closest to, and it’s not pretty. But it was an important lesson: All good things have to come to an end. Amy was done and she finally found her words. Sheldon listened and genuinely came to terms with it, and we see that in his final speech.

There is no way to articulate what it’s like to end a show after working on it for this many years. Most of the memories I cherish most dearly are the ones between us as a cast and as a team, throughout all the significant changes in our lives. And, as our director Mark Cendrowski reminded us, there is time for tears. And there is also time to know how much joy and laughter we shared not only with millions of people all over the world but with each other as we made comedy TV history.

I will miss writing up these episode reflections, but my identity as Amy is far from over, and I know that and am at peace with it. I am part of your lives as Amy forever, and I am eternally grateful. 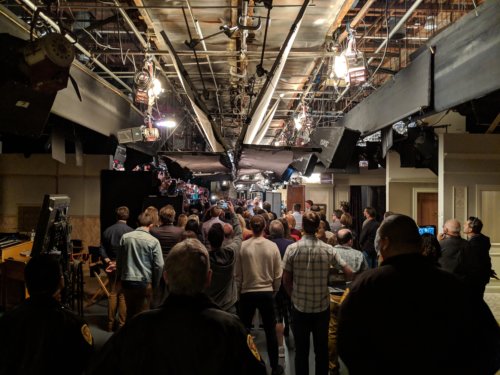 The whole cast and crew watching the final scenes together on stage
SHARE: