I must warn you first: This post WILL have spoilers because we are going to talk about the behind-the-scenes tidbits surrounding the season 11 premiere/proposal of The Big Bang Theory! Avert your eyes now if you don’t want to know what happens!

When Sheldon flies across the country to New Jersey and proposes….

I think most people thought she would say yes, and the fans I meet kept saying things to me this summer such as, “SHE BETTER SAY YES OMG SHE HAS TO SAY YES!” So those people must be pretty darn happy. I am so curious what people thought. (Share your thoughts in the comments on this post!)

Honestly, I thought she might say no! I don’t know why; our writers are quirky. I thought it was a possibility!

Am I happy she said yes? Sure. I mean, it’s my job to play either way. As actors, we oftentimes have to act out things we totally don’t like or agree with. That’s just how it works! But in this case, it’s joyous and fun to play this out. 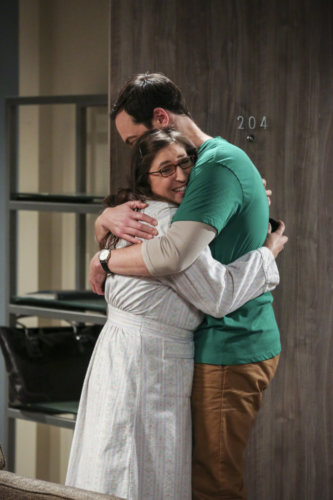 What’s Next? Who Knows…?

I know NOTHING—and I mean nothing—about our writers’ plans for Shamy. I don’t know what’s going to happen at all, but I want to remind everyone how many times Penny and Leonard’s relationship was turned upside down: How many times they broke up, how many times things have been up and down. And, not so long ago, even Shamy had a breakup and time apart.

That being said, who really knows what’s going to happen? We may not see them ever get married; we may have a wedding next week (…although that is highly unlikely!), we may see a wedding this season, or next season or who knows. Just because she said yes doesn’t mean that’s the end of the story.

By the time this episode airs, I will have filmed a few more episodes, and I will for sure know more than you; but I still don’t know everything and this can still go a lot of different ways!

The way our writers are handling Melissa Rauch being pregnant in real life is to make Bernadette shockingly pregnant again even though she and Howard do not really know if they can handle a second baby so soon. This really surprised me, especially since Melissa is so petite and basically looks like she swallowed a grape, she looks so..un-pregnant! But I think it makes sense for Bernadette to be pregnant…I totally get that. And I can’t wait to see how this season unfolds for her character and Howard, as well as for Melissa personally. I am so thrilled for her and as my friend, I only want her comfort and happiness. Getting to see her daily is really special!

The ring Amy wears is Sheldon’s Meemaw’s ring and although it is a costume ring, it sure is pretty! It’s got a lot of fancy detail and Sam, who is in charge  of our on-set props, would joke he was marrying me every time he gave it to me to wear for rehearsal and taping; and at the end of every work day he playfully asked for a divorce when I had to give it back! 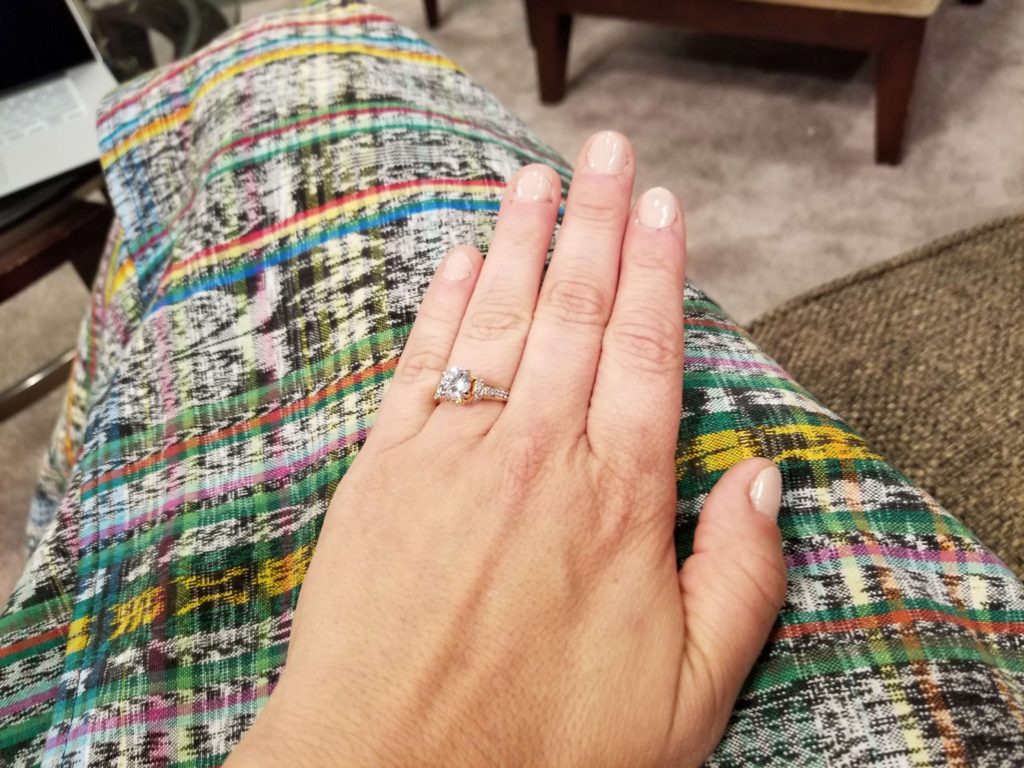 I decided to let Amy enjoy the process of being engaged much as she enjoyed having a tiara in the episode people most ask me about…So I let her do a little twirl and enjoy showing her ring off. Even though Amy is not a “fancy girl,” I think it’s healthy to show that even cerebral brainy types who have no fashion sense can enjoy the beauty of a ring and the process of an engagement. It doesn’t make her less of a strong female for doing so!

Our Many Love Connections—Romantic and Bromantic

This episode deals not only with Amy and Sheldon’s proposal, but it also deals with how Howard and Bernadette handle their news of being pregnant. In addition, we get to see Leonard and Penny taking some fun jabs at each other as part of their processing Amy and Sheldon’s engagement. Raj and Stuart get to show off some of their lonely sides as they frame their lives in contrast to the lives of their friends, who have significantly moved forward in their relationships.

Because when our show premiered—before I was even aware of it existing!—people loved that it showed a group of geeks or nerds, people who aren’t really given their own space to be themselves, in their own spaces surrounded by the geeky things they love. But as the show developed, its core has become the relationships; each character has a heart, and feelings, that are explored and honored by the writers. M​ore and more, TBBT is looking at how people feel​—not just how they are—and how they interact with the characters around them​.And I think this is one of the most special things about TBBT today.

The interactions we show ring true for me and for many of you, and I really hope you enjoyed watching “The Proposal Proposal” as much as I enjoyed being a part of it!

I can’t wait to see what next week brings. And the week after…and the week after! Stay tuned for more behind-the-scenes scoop, photos and footage right here at Grok Nation!