There’s really nothing to talk about this week except… PAINTBALL!!!

Yup, our entire cast got to suit up in camouflage for “The Paintball Scattering,” an episode geared all around playing the sport. It’s the perfect backdrop for the various fights among the couples. And there are many.

Koothrappali is mad at Anu, Sheldon is mad at Amy, and Stuart’s girlfriend Denise is mad at him. Enter guns with high powered bullets of paint and you have episode 11 of season 12! Don’t get me wrong: I also loved Amy being chosen to be the “media darling” for their recent publication and the tension that ensues because of that. But the real fun was filming outside, which we very rarely do, and all being in camo for a variety of scenes in bunkers and on the “loser’s bench,” as it’s referred to in the script.

The weather. It rarely is cold in Los Angeles. Like, ever. But the day we filmed outside, it was COLD for us. I think it was about 55 degrees, which is COLD for our thin LA skins! Melissa and Kaley used hand warmers and puffy coats in between scenes, and I joked that I am well insulated, so I didn’t need assistance staying warm. Seriously, though, it was COLD when you’re not moving around a lot. Brrrrr.

The clothing. I don’t wear pants hardly ever out of the house. It’s been maybe 15 years since I have, and it’s part of a religious commitment to standards of tznius, or modesty. In one early Big Bang Theory episode, I wear sweats and a long shirt over them (the scene had a joke specifically about sweatpants). And in this episode, I wear baggy camouflage. I was glad the jacket was roomy and comfy, so I didn’t feel AS self-conscious as I usually do. It also was very reasonable to me that my character would indeed wear pants to play paintball. 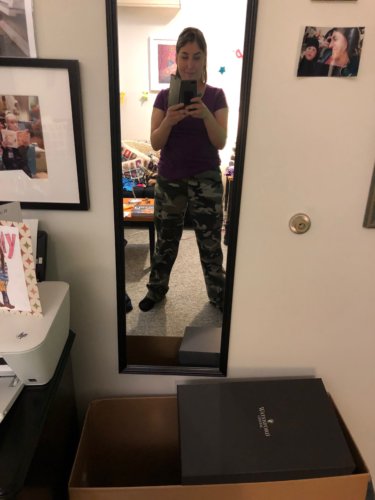 Suited up in camo pants ahead of taping.

The time. Because we typically tape in front of a live studio audience, we’re not used to normal call times. For most of the cast, they had a 6 a.m. call time! Jim and I got the later calls… which I felt guilty about! So our day was a healthy 12-hour day—even longer for our hard working crew. This is rare for us, so it took some getting used to. Many of us were very sleepy and kind of punch drunk, and we ended up laughing a lot all day—which was nice. 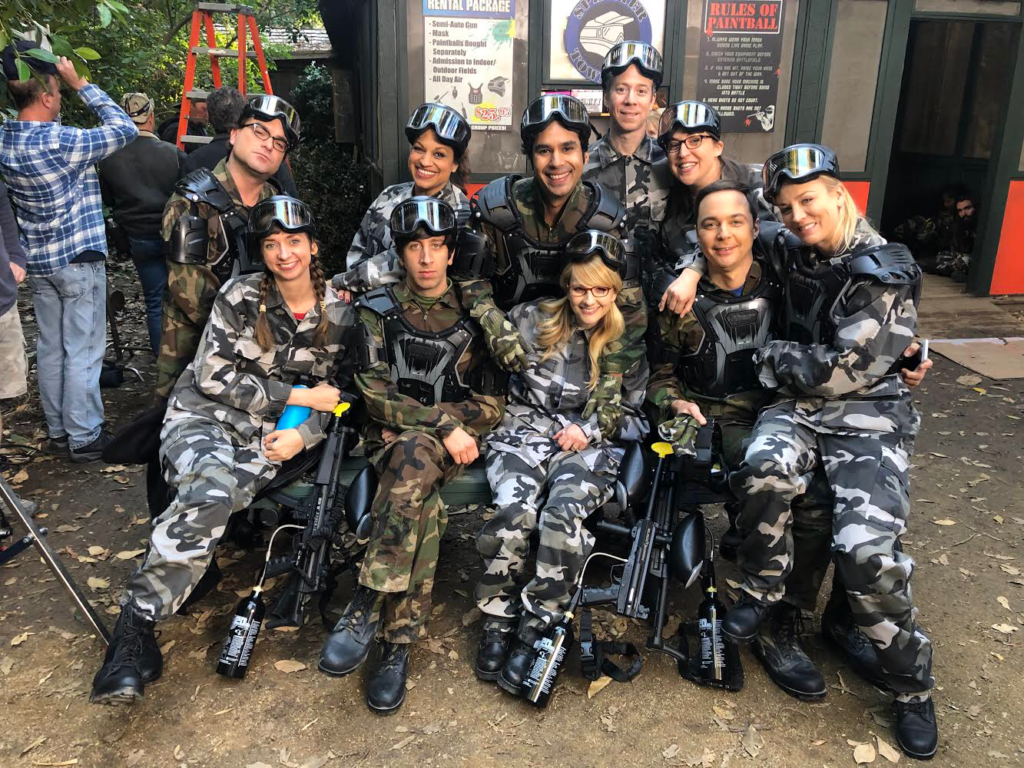 The filming. Loud sounds scare me. Like, it’s a psychiatric thing. It’s neurological. I have had a crying response to loud sounds ever since I was in a significant car accident six years ago. The sound of paintballs being fired much less them hitting my body is enough to make me cry just anticipating it. Thankfully, the paint was added in “post”—after the fact! So I did not need to worry about A. crying on set or B. trying to hide that I was crying on set. Phew!

(Sound sensitivity that makes you cry is a feature of PTSD, which occurs for some sensitive souls after a trauma such as a significant car accident. For information on what PTSD is and isn’t, see my post here about it.)

I know so many fans were excited at the prospect of a paintball episode and while I dislike paintball greatly in “real” life (see PTSD comments above), it was super duper fun to be a part of it in character! What did you think of “The Paintball Scattering?”

Read More From Mayim
Explore These Topics: CBS The Big Bang Theory
More Like This: