Online birth stories—women writing in varying degrees of detail about labor and delivery—are by turns aspirational and scary as hell. But nothing can touch that of Meaghan O’Connell, author of the popular 2014 Longreads essay “A Birth Story” and new book, And Now We Have Everything: On Motherhood Before I Was Ready, out April 10.

“Long before I got pregnant, I was obsessed with reading birth stories and would send them, especially the horrific ones, to my friends,” says Meaghan, who unexpectedly became pregnant in her 20s after quitting her full-time job at Kickstarter in anticipation of marriage, traveling, and writing (she didn’t even have health insurance). While awaiting the birth of her son and reading books about babies and motherhood, Meaghan realized she was missing the real-talk version. And after she gave birth, “it became a joke that my friends would be like, ‘Where’s your birth story?’”

So she decided to write it.

That tale, which details Meaghan’s “perfect” pregnancy, “perfect” birth plan, and terrifying birth story, became her Longreads essay—which was the site’s most popular post of the year—and was expanded into And Now We Have Everything. The book contains the honest, anything-but-ideal story of her labor and delivery. (A choice line: “I was a decrepit sea log being beaten upon by the waves, my mother, fiancé, and nurse waving from the shore, feeling helpless and horrified, bearing witness.”) But the book also explores themes of what it means to be “ready” for a baby, learning to advocate for yourself, and ambition and motherhood.

Here, we speak with Meaghan about the process of writing her story, what it’s like working as a mother, and more.

Your Longreads essay “A Birth Story” was darkly funny but also had a lot of traumatic moments. You were in extreme pain because the epidural didn’t work in one spot, doctors broke your water with something terrifying called “an amniotic hook,” your heart rate was soaring and setting off alarms. Was writing about the ordeal difficult or therapeutic?
It was weirdly cathartic because for the past couple of months, I’d been trying to talk about it with my friends, but I couldn’t even articulate what was so hard or where my headspace was and how I feel different now. When I started writing, it just kind of came out of me, and I was obsessed with getting time to write it.

Were you scared to put it online? It’s a really personal thing.
After I finished the essay, I decided that it was a good piece of writing, but it was so vulnerable and fresh. I really didn’t want to put it out on the Internet for people to comment on—I was just not ready for that. At first I put it in a Tiny Letter—like a newsletter—and I did it in four parts over the course of a day. I had worked with [the editor of Longreads], and when he offered to publish it there, I was like, “OK, there it feels like a safe space.” They won’t give it an embarrassing headline. He edited it really respectfully. 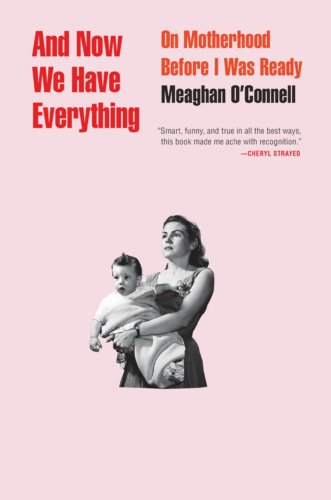 Now in your book, And Now We Have Everything, you theorize that you might have had postpartum depression or anxiety. Was that part of what made it hard to articulate?
I didn’t really realize I might have had it until I started feeling better. I don’t know if that was just circumstance or brain chemistry or both. I remember I went to a doctor three months after I had the baby, and she was like, “Well, how are you doing?” It was a quick mental health survey kind of thing. I said, “Oh, not so good. I just think my baby’s going to die all the time,” and started crying.

You’ve mentioned that the books you were reading while you were pregnant weren’t the honest takes you needed, so you decided to write your own. What were you reading at the time?
When I got pregnant, I sort of treated it like a project. I ordered 20 books and read them to soothe my anxieties. I read What to Expect. I read Spiritual Midwifery, and The Womanly Art of Breastfeeding. But then it became like another aspirational thing—books telling you what you should do, but not talking about what the experience is like. It was like, I need to have the perfect birth, and I didn’t know if I was going to be able to do that.

What was missing?
I really wanted to know, and couldn’t find in parenting manuals, what it was like being a mom and how I was going to feel about it. I was so concerned with doing the right thing. I wasn’t imagining it would be me who was doing it. I sort of imagined I would become a different person when I became a mom because all of it was so unimaginable.

That’s what they tell you, right? Everything changes, and you have this intuition or instinct that kicks in, so you’ll suddenly know what to do.
But what I kept coming up against was that I was still the same person. Everyone says it’s so dreamy, and you just breastfeed all day, and it’s magical—and it is sometimes, but I didn’t all of a sudden become an earth mama or something. And now I’m pregnant again. So the things I think about are, “What are my tendencies?” What is going to drive me the craziest, and how can we work around it instead of saying “How can I change?”

You write in the book that you told your best friend not to let you have a baby until you had written a book. Why does it still feel like family and ambition are two different things?
It just doesn’t seem cool to want to have a baby. It seems like a weird thing to admit. It almost feels like retrograde or something. That’s kind of how it felt between my peers. We were fascinated, even like maybe secretly obsessed, with what it would be like and what we would do. But when you’re 33, and that’s the peak of your career…it’s just a bad time to fall out of the game.

Having a child affects women in a way that it doesn’t men. You have to be willing to sideline some things.
It takes a year out of your life, and in the grand scheme of things, that’s not such a big deal, even though it feels like it is. You can’t spend all day breastfeeding and not think about that. Now I just think in five-year increments. “I’m going to have this baby, the book’s going to come out, and then when the baby goes to day care, I can start writing another one.” It’s less urgent. It’s big-picture.

How has being a mom impacted your writing? A lot of people say it makes you more productive.
I do think I waste less time. In the earliest days, writing after I just had the baby was the familiar thing I could do, and I knew I was good at it. Practically, I have to earn enough money to pay for day care to justify my time—so that’s motivational. But also, I have to leave and pick him up at 4 p.m. every day. In the old days, I would just work all night—order takeout and stay up late. I can’t do that anymore. I think it’s probably better for me. It’s saner because there are specific hours that I work every day, and then I can go be a person.

Sounds great!
But I’m not saying you should have a baby because it’s good for your writing.

One of my favorite parts of the book is when you’re in labor, and you’ve been at the hospital for so long, and your progress is stalling. It felt like a watershed moment for you, where you finally decided to think about what you wanted and what was best for you.
I really think it was a turning point in my personality. Maybe when people have kids later in life, they already have that kind of personal growth.

I think it’s the mindset of a lot of women when they turn 30. You stop caring about what other people think.
I turned 30, like, six weeks after that. Having a baby forced the issue of being, like, I don’t really know what I want a lot of the time. I’m just trying to make other people happy, or trying to do what I think seems like the right thing. And that comes up so much in parenting. Four years later, I feel like I’m being more realistic about what I can handle and what I need, what I want to do, and what really matters to me. But I feel like I had to have a baby to figure all that stuff out.

And Now We Have Everything: On Motherhood Before I Was Ready is available on Amazon.