Marin Hinkle has made quite an impression on fans of The Marvelous Mrs. Maisel in her role as Rose Weissman—the 1950s-era Jewish matriarch to the show’s titular character, Miriam “Midge” Maisel (played by Rachel Brosnahan). Rose is gifted at guilting, perfect at all times and expects her daughter to be as well. She dresses impeccably, has a flair for the dramatic, a penchant for psychics and is fiercely devoted to her family—all of which makes her fascinating to watch, but it’s Hinkle’s portrayal that makes Rose so endearing.

Hinkle has so embodied her character it’s almost easy to forget all the prior turns she has taken on the small screen, including parts on Once and Again, Spin City, Law & Order, Brothers and Sisters, Speechless and Two and a Half Men. The actress grew up in Boston, aspiring to be a ballerina, but her plans were sidelined at 16 when she suffered an ankle injury, steering her career trajectory toward acting. The decision was initially frowned upon by her parents, both of whom were academics (her dad a college dean and her mom a Superior Court judge in Boston). They eventually came around. 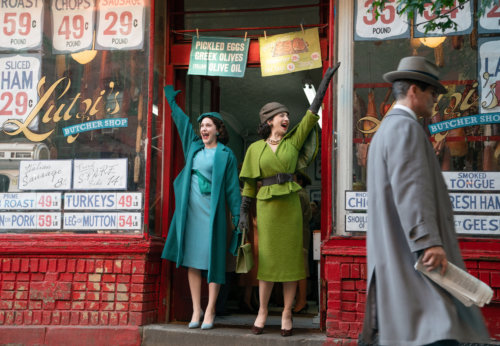 On December 5, she returns to TV in season 2 of Amazon’s The Marvelous Mrs. Maisel and promises an intriguing Parisian story arc for the ever-evolving Rose. “We left her in the first season essentially feeling betrayed by her daughter,” she says. “As season 2 starts, she spins into a place that I don’t think was imagined when we began the series. She is on a voyage of self-exploration that brings her to Paris. She is searching for an identity that isn’t based on a codependent relationship with either a child or a spouse. Her trajectory is kind of similar to what has gone on with her daughter Miriam’s own search for self. Rose is now on a quest asking herself, ‘Where have I been and where am I going to go?’”

Ahead of the series return, Hinkle answers our 5 Deep Questions.