I am a skeptic about astrology. But when I heard that a well-known feminist astrologer named Ophira Edut wanted to do my charts, I figured I’d give it a shot.

Ophira started out as a skeptic, which made me feel very comfortable. While in college, she had her charts read and what she was told based on the alignment of the planets at the exact time of her birth resonated. As the Astro Twins, she and her twin sister, Tali Edut, use their astrology training to help people work on their relationships. She has seen charts line up with people’s lives in compelling ways. She devotes her life to helping people have access to this information, and freely shares How to Get Along With Anyone, the book she and her sister wrote together.

I don’t know about this, to be perfectly honest, and I told her so. She read my charts and we spoke for about an hour. As a public figure, how much can I hope she “knows me” from my charts? I mean, she knows I am divorced and she knows a ton about my kids’ personalities and mine from Grok Nation articles alone!

I listened and definitely felt connected to some of what she said. Ultimately, as a person of religious and spiritual faith, I don’t know if astrology is for me. But she has a soothing voice and a lot of psychological intuition and she is intelligent and sounds very nice.

I was more interested in understanding her philosophy and practice as opposed to finding out that my kids were late talkers and I tend to be anxious and rebellious but also traditional and tactless (all of which is true). And so after she read my charts, I asked her the following questions which she handled with grace and patience.

How does astrology actually impact your life and personality? As a scientist, I know that environment and genetics play a huge role and I’ve never felt the “need” for something to explain much of anything else. Where does astrology fit in?
“How I see it is that science is THE rulebook for the physical, 3-D universe,” says Ophira. “It explains the laws and it can’t be refuted. But astrology is describing something beyond the 3-D universe—other overlapping or intersecting dimensions that announce themselves with coincidences, “random” serendipities, deja-vus and things that can’t be quantified or measured, but also can’t be denied. Astrology is part of the ‘science’ of consciousness and the human soul.”

Ophira says that astrology is a part of the entire picture that is you. And she is an identical twin (which means she and her sister share the same exact chart) but she and her sister don’t have identical lives, which is evidence for the individual aspects of life and our personalities.

“The stars’ positions are one of the factors that a soul looks at,” she says. “The soul says ‘what do I need to learn next?’ and that that determines when a soul is born.”

This kind of sounds unreal to me. I believe in my soul, but I don’t think of it as an active being deciding what it needs. I don’t begrudge her that belief, but it’s very far out there for me. 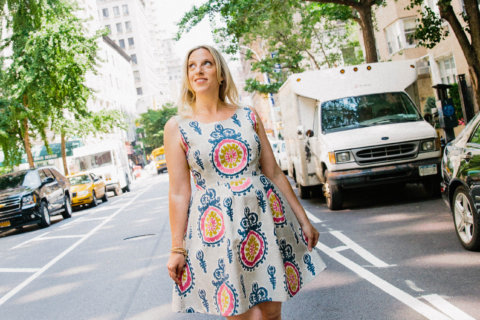 What does astrology help with?
“The planets form angles to each other and there are seven main ones which are ‘hard’ or ‘soft’  and the planets are associated with qualities such as communication or the unconscious,” she says. The planets forming angles is a true fact of geometry. Again: I am not sure I can accept that this means they impact my personality. Just being honest here!

Ophira also added that mental health challenges or behavioral challenges can correlate in charts. “You can sometimes see that,” she says. In this way, late talkers, for example, can often be predicted by their charts. Knowing a child may be a late talker may mean providing extra support as they develop or considering attachment parenting. I feel a bit nervous about this; predictive astrology about a child’s development sounds deterministic.

According to Ophira, astrology can also help you find solutions to challenges in relationships and this actually made sense to me. She says definitively that astrology brings you self-awareness. It can predict future possibilities, but it’s also about having tolerance for others’ limitations. She feels using astrology to communicate allows her to speak more clearly to people as she understands them better. She joked, “[Knowing someone’s chart] gives you something to blame.”

Is astrology predictive? How it is different from psychics?
“We co-create with the planets,” she says. “The stars compel, they don’t impel.” I don’t know about co-creating! It sounds nice. But I also feel like I go to so much psychotherapy that I co-create with my anxiety, depression and OCD daily. And it’s a lot to handle! Ultimately, Ophira feels the chart is a map of the inner work you need to do in order to fulfill what’s possible for you. I can understand that.

Why would an intelligent scientifically educated person care about astrology? (She actually asked this question and answered it herself because it’s something she knows needs to be addressed.)
Here is what she answered: “Science is the ultimate rule of law of the land for the three-dimensional universe. I’ve come to believe through my experience with charts and weird serendipities and coincidences that there are overlapping dimensions. Astrology may be one of the sciences of another dimension. Maybe we need it. Maybe we need this other dimension now because look at the world the way it is: empirical data is not enough to guide us through…we also need the intuitive.”

I was with her until “overlapping dimensions.” As a lover of psychics, I know there are many dimensions and that there are overlapping possibilities of our existence based on the spin of electrons. But how these dimensions play into coincidences or serendipity is not in my grasp as of now. I know there is more to the world than what I can see or measure.

And while I believe in a Divine Higher Power and I feel touched by It all of the time–like, every second–I am still skeptical. I have dabbled in some of the esoteric texts of my religious and cultural tradition (which explicitly warn against the use of astrologer and numerology but do employ some beautiful nature-based and mystically groovy takes on the planets and the larger universe), but I don’t know that astrology resonates with me intuitively.

I respect Ophira and her work and I truly appreciate her putting up with this skeptic! I did enjoy my time with her and I gleaned some insight from some of the connections she made about the men in my life in particular. I don’t know that I would rely solely on astrology to guide me, but I definitely can see it being added to other ways we are self aware and the ways we open ourselves up to the possibility that there are some things in this world we can not touch or measure, but which indeed influence us in magical ways.

Read More From Mayim
Explore These Topics: Astrology
More Like This: