During my junior year of high school, one of the homework assignments for my honors history class was to trace our family trees back six generations. I think the assignment had something to do with tracking how the movements of our ancestors ultimately landed us in the classroom of a hippie-dippy high school in northern California. Armed with the research tools of the early ’90s (a pen, a notebook, and a landline phone), I set out to find my people. What I discovered was a heritage that I never imagined.

Tracking down your ancestors can be simultaneously fascinating and frustrating. It’s easier in these days of the internet and ancestry.com, but one still encounters unexpected hiccups. Surprises can pop up with parentage. And: My big discovery was a secret religious past.

I think I was luckier than some of my classmates, in that my mother’s cousin had done much of the family tree work for my maternal grandmother’s family. But when I called him to ask if he would drop a copy of his research into the mail, he told me that some of the secrets in our family tree were so explosive that relatives had asked him to sign an NDA (though he never actually did!). As a suburban teenager who thought she knew everything, the fact that people who lived in the 1700 and 1800s had lives naughty enough to require a non-disclosure agreement completely blew my mind. What kind of dirty secrets could people who wore corsets and powdered wigs possibly be hiding?

As I perused the annals of my family history, I discovered fascinating things about my ancestors. Despite my pale skin and blonde hair, I had a Native American great-great-great grandfather, a Creole great grandmother, and a Prussian Jewish great-great-great-great grandmother. There on a branch of my overwhelmingly Protestant family tree sat Rebecca Kaufman. Born in 1821 to parents who were fleeing religious persecution, Rebecca ended up in Pennsylvania, married a Reverend named Amos, abandoned her former religion and raised her eight (!) children as Protestants. As I traced Rebecca’s trajectory from her Prussian past to Protestant future, I marveled at her strength and mourned for the loss of her Judaism.

Romantic notions swirled through my 16-year-old brain. Did Rebecca fall madly in love, disobey her parents and run off with Amos? Was this my own familial version of Romeo and Juliet? It might be hard to believe these days, when every wedding seems to be an interfaith one, but America in the 1800s certainly wasn’t a place welcoming to couples who celebrated Chrismukkah.

I wonder, too, if Rebecca’s marriage to Amos was less about love and more about self-preservation. I don’t know how many Jews there were in rural Pennsylvania, but I can’t imagine that the Kaufmans arrived in America to open arms. Perhaps Rebecca suspected that only through complete assimilation would she, and by extension her children, find acceptance in the United States. So my Jewish heritage remained secret for decades until I discovered it—and embraced it—at age 16. 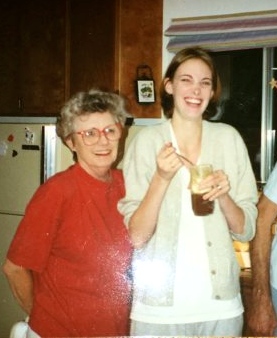 Anna and her gran, a descendant of Rebecca Anna Lane

I’d always found Judaism intriguing, but the discovery of my Jewish heritage felt validating in many ways. So many aspects of my family and my upbringing that had previously seemed odd—certain traits, sayings and recipes in particular—made sense when viewed through the lens of Jewish ancestry. Rebecca may have hidden her religion from her children and grandchildren, but she didn’t completely erase her Jewish past. I present as evidence the potato kugel recipe (called casserole, natch) that has held the place of pride on every holiday table for as long as anyone can remember. My Grandmother said the kugel was a recipe passed down from her grandmother who received it in turn from her grandmother—a recipe hailing from the old country, so to speak. My family also eats pickled beets and German coleslaw and uses odd sayings that only make sense in Hebrew. I like to think that Rebecca’s recipes and sayings were her small personal rebellion against a world that didn’t allow her to be fully who she was.

I had no way of knowing all those years ago while working on a high school assignment that I would end up married to a Nice Jewish Boy and parenting two Jewish children. As I muddle through the complexities of raising our children in the Jewish faith, I wish that Rebecca had felt safe enough to share her traditions with her children, and that they had been passed down through all the future generations, including me.

I can also comprehend why Rebecca may have felt the need to conceal her background. These days it feels especially important to celebrate our religious traditions openly. Each year, when we place our menorah in our living room window during Chanukah, I say an extra little blessing for Rebecca and hope that wherever her spirit resides, she’s happy to know that we’ve come full circle.