When you’re a child, you grow up with the echoes as part of the daily educational rhythm. You read Anne Frank’s diary when you’re probably too young; idealize her so much that at 10, you name your own diary “Kitty,” after hers. You write reports about Elie Wiesel and Simon Wiesenthal, and watch Holocaust documentaries throughout middle school. In 8th grade, you co-write a play about the Holocaust: they’ll call it a cantata, even though you aren’t sure what that means. You write sentences that you believe are powerful in impact, conveying the gravitas of the historical event, while the other kids make fun of those lines for being overly dramatic. You’re wounded as a young writer, but you also wonder, how could lines about the Holocaust ever be dramatic enough? In 11th grade, you finally get a part in the school play, portraying a grandmother in the final days of the Warsaw Ghetto. When you graduate, if there’s one thing that’s seared into your soul, it is the simple two-word injunction: “never forget.”

In your 20s, you write a book about children who survived the Holocaust by going into hiding–physically, in barns and attics and cellars, or by living in Christian homes and pretending not to be Jewish. In trying to find Holocaust survivors to interview, you find out that “hidden children” do not consider themselves Holocaust survivors because they believe the term is reserved for people who survived the concentration camps; and that when their children say they’re hungry, they snap back with “you don’t know what hunger is like.” You ask to interview someone who tells you she is not and will never be ready to tell that story, and you cry wondering who you thought you were to ask these people to relive their worst memories. Three years later, she is the featured speaker at a Holocaust remembrance day event, and you hope that your question – unwelcome at the time – helped her move toward being able to share her story.

In your 30s, you become transfixed by and disenchanted by community and world Holocaust remembrance commemorations. Most events feature Holocaust survivors telling stories, lighting six yahrzeit candles – each remembrance candle in honor of a million Jews slaughtered, for a total of six million. Another has community members reciting the names of the slain Jews for an entire day and night, people signing up for reading shifts in daylight and even after the city that never sleeps has called it a night. These are the regular kinds of remembering. At some point, people try to innovate in remembrance: one event begins with everyone writing a concentration camp number on their arm, an attempt to see themselves in the Holocaust narrative.  And somewhere else, twentysomethings are getting real tattoos of their grandparents’ concentration camp numbers, their way of etching “never forget” into their skin while inflaming those who maintain that tattoos are against Jewish law, even when done as an act of defiant memory. But however you observe it, Yom Hashoah (Holocaust Remembrance Day) is a regular part of the calendar; the observance of a special day on which you should “never forget” is something you do to remember what was lost, even if there are years when you don’t feel it as acutely. You’ve been attending these events annually. Once or twice, you take a break from them, opting instead to sit home and watch a Holocaust-themed movie. But what you do on a particular day is not the issue. Your “never forget” is cellular, active 365 days a year. 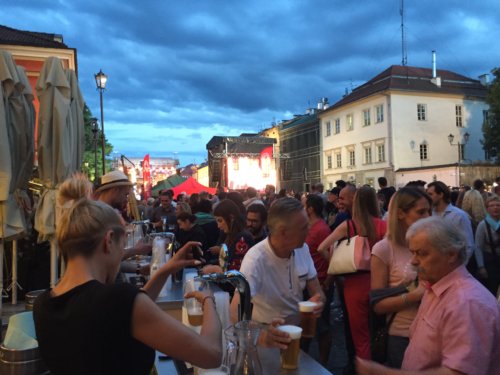 In your 40s, although it was never on your list of musts, you visit Poland. You are told that the Polish people are not responsible for the concentration camps, and hear from Polish officials that we should all be talking about the “German concentration camps” instead of the “Polish concentration camps,” because the camps were German-created and -run. You trudge through Auschwitz barracks-turned-museum-displays of artifacts from the most horrific of times and walk the gravely path at Birkenau, leading from the train depot to the bombed-out remains of the crematoria. Sometimes this walking through history makes you feel like your emotions are asleep, and in other moments, like you don’t know when the crying started and when – if ever – it’s going to stop. You sit down to a sumptuous lunch in a fancy restaurant several stones’ throw from the concentration camp, and wonder too much about what stood on this site, what floated through the air seventy-plus years ago, and what still may float through the air now, as you breathe it. You attend a Jewish culture festival in Krakow with thousands of other people, klezmer and Israeli music taking center stage in a town square that once housed the Jewish ghetto; many of the celebrants are young and not Jewish…they’re here for the music and the good times, intentionally overlooking or unintentionally oblivious to how their grandparents might have treated your grandparents, had your grandparents not successfully emigrated to the United States before things got really bad. You, with your “never forget” soul, understand these things. And at the same time, you’re aware that you understand nothing.

Here, in the footsteps and in memory of those who no longer are. #shoah #birkenau #memory #zakhor