I never had a bat mitzvah. I was supposed to, but I called it off, for a bunch of reasons. Mostly I hated being the center of attention. And dancing. And Hebrew school. Also, I was super judgmental of the lavish parties my peers were having. Wasn’t the whole point of this ritual supposed to be becoming a man/woman in the eyes of God and your community and, like, some other Jewy stuff? And if so, what did any of that have to do with turning the ballroom of the Marriott into a you-themed nightclub?

I didn’t want any part of it. Except, if I was being honest with myself, maybe I sort of did, and that made me feel ashamed. I understood my party would not be like those other ones. It wasn’t in my family’s budget to throw a (literal) carnival that guests were informed of via an invitation mailed in a confetti-filled plastic tube. The thought of the whole seventh grade being bored and underwhelmed by my modest, no-frills (although certainly tasteful and lovely and meaningful in ways that are difficult for a 13-year-old to pick up on) party felt deeply embarrassing.

To top it all off, one of my best friends who went to another temple had the same date as me, and she’d already booked the evening. If there was anything worse than a low-key Saturday night party, it was a low-key Saturday luncheon. Thanks, but no thanks.

I don’t remember my mother or father being bummed out by my decision or trying to get me to change my mind. This could be because I had already entered that phase in which my parents and their feelings existed entirely on the periphery of my self-centered, friend-obsessed universe. It could also have been that they were in the middle of splitting up and were therefore a little relieved to get out of it.

Now I’m about to throw my second bar mitzvah, and if my son Zack told me he wanted to cancel it, he would certainly know how I felt. First of all, I’ve become more observant and tradition-oriented in my adult life, which makes this kind of thing feel less optional. But more importantly, while it’s about him, it’s also very much not just about him.

Zack is doing a great job learning his Torah portion, but on our end we’re doing the mental acrobatics of figuring out table seating for the various people who have been important to our family and combing through 13 year’s worth of photos for the montage and thinking about how to best capture our kid’s essence in a speech.

No matter where you are religiously, or if you mark the milestone with a bagel platter or a trip to Israel or by hiring Drake to perform at your party, it’s impossible not to get emotional and excited while in this space. It’s all a major reflection on and celebration of, for better or worse, what you’ve made.

Maybe that’s why my parents overrode me and, with the help of my friend Wendy and her mom, planned me a surprise 13th birthday party. It was at the clubhouse in Wendy’s housing development on a Saturday night and I was utterly, mortifyingly surprised, even though there had been so many hints I’d missed, like the wall calendar hanging in Wendy’s kitchen with the day marked “Jana’s surprise party.”

There was a DJ and a sign-in banner made with 1988 computer software, and my grandparents and aunt and uncle and cousins came. There was also a very charismatic DJ, and I think I’m still feeling residual trauma from having to dance and be on and worry if people were bored and what they thought of me. From the pictures it looked like everyone else had fun.

Posting this shot of Wendy’s jazzy bat mitzvah sign-in board here is absolutely not a form of revenge. (Fun fact: Our Bichon Frises were sisters, from different litters.) 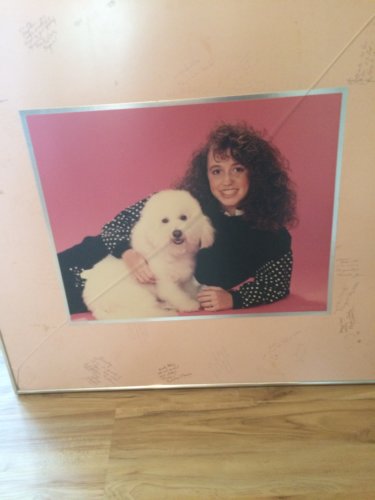 Anyway, if she has a problem with it, she can bring it up at Zack’s bar mitzvah. She’ll be there with her husband and kids. Her mom is coming, too.