[Image: Erica’s 18th birthday–a birthday she was not entirely sure she’d make it to]

For suicide prevention week, we are featuring three personal stories of people whose  families were impacted by suicide. Here is the second by Erica Snyder. (Please also read this piece by Samantha Taylor.) And remember, for more information about suicide prevention and awareness, visit NAMI. – Mayim

A 10-year-old girl sits at a table in Hawaii eating brunch with her family. Between her waffle and her orange juice, she manages to slip in a comment about how she had been questioning life. Whether it was trivial or legitimate was irrelevant – didn’t matter. What mattered was her parents’ responses. Her dad took her 5-year-old brother to the pool and her mom took that as an opportunity to let her in on a family secret.

“You know how my daddy died before you were born?” the mom asked.

“Yes?” the girl asked inquisitively, not sure where the conversation was going.

“I never told you how he really died.”

“But you said he died from poison.”

The poison she spoke of: the carbon monoxide he inhaled from his car in a closed garage. Suicide.

Fast forward about 7 years, the boy, now 12, asks questions of his own. This time, around the kitchen table at home.

“How did your dad die again?”

The parents looked at each other and decided it was time. Finally, he knew too. But he had a little more apprehension understanding the concept of suicide than his sister did years before. He didn’t understand and, still, doesn’t (the boy is now 14.). The girl though, well, she understands why. I understand why.

When I was 16, I was battling depression. My family had moved, so I ended up switching high schools my junior year. Needless to say, I didn’t adjust well. (In retrospect, switching high schools led to some great opportunities for myself, but of course I didn’t know that at the time.) I had made one close friend, and was beginning to open up to her.

In January, about halfway through the school year, I recall my school counselor pulling me out of class. While some school counselors are absolutely phenomenal, this guy was young, and not super-great at his job. I had a pit in my stomach. We walked into his office and he motioned for me to sit while shutting the door. I sat in the hard chair and tried to tune out this underqualified school counselor.

I simply nodded, without attempting to defend myself. There was no point. The “harassment” he spoke of was me telling the one close friend I made at my new high school that I was suicidal. I thought I had done the right thing. While every adult at the time thought (and still thinks) I just wanted attention, I really needed help and didn’t know how to ask for it. My therapist told me I did the right thing, and she was proud of me for reaching out.

As that week went on, I learned more and more about what exactly transpired. My friend was not mad or upset that I reached out to her, but her parents were furious and did not want me around their child. They called the school and demanded I stay away from their child. They said I was crazy; they said I was toxic. In response, the administration contacted the teachers of our shared classes and asked they make sure we don’t interact. Yes, this was at a public high school.

The same day the guidance counselor spoke with me, my class principal called my mom, and she ended up being much kinder than her coworker. She claimed the school was there as support for me whenever I needed, but the damage had been done. I was already scarred by how the school guidance counselor handled the situation. At the time, my parents were disappointed that this was their child, that their child caused all these issues. They felt it was a reflection on them, almost as though they did something wrong as parents. But as time has progressed, they’ve grown to gain a better understanding of mental health and now understand it was never their fault.

A few weeks later I was forced to go to an absolutely horrendous, insurance-covered psychiatrist, whom my therapist was personally against. As a matter of policy, the psychiatrist would never meet with a minor alone because she believed “everything should be out in the open.” I understood that philosophy in theory, but ultimately, it proved ineffective, as teenagers seldom talk authentically about mental health in front of their parents. That psychiatrist shoved me on Prozac, even though I specifically said I did not want medication.

As junior year progressed, the friend who I had reached out to apologized to me on behalf of her parents; we resumed our friendship. But once summer hit, her parents told her she would be in “major” trouble if she communicated with me. So one day, she simply ended it. She blocked me on all social media and stopped returning my texts. To say I was devastated would be an understatement. Now I had no one.

At that point, my depression started to get debilitating again; my weekly therapy session was all I looked forward to. A few weeks into summer, my parents encouraged me to take a class at a prestigious university near our house. It was summer and I had little motivation, but I listened to them and did it anyway. I’m so glad I did. I had been in class for a few weeks when I started talking to another high school student in the class; she went to a private school right by my public one. After talking to me, she told me she wanted to introduce me to one of her friends and gave me her friend’s number. My Depression told me not to bother even texting this girl; my Social Anxiety said, “definitely don’t hang out with her.” After my experience with my other friend, I was cautious about making a connection, in case that friend would also be taken away. But something inside me pushed those thoughts away. I texted and hung out with her anyway.

Now, it’s more than two years later and that girl is my best friend. I can’t even tell you how fortunate I am that Depression and Social Anxiety didn’t win, because I can’t imagine what the past two years would have been like for me without her friendship in it. Over those two years, she has had an immense amount of patience for my mental health. At times, it can be trying, but she has stuck around. For that, I am grateful.

Suicide is a word strung up of just 7 letters, but those 7 letters (in that order) cause more fear than most words in the English dictionary. When someone says “I want to kill myself” or “I don’t want to be alive,” we panic, we get scared. We just don’t know what to do. And that is why thousands of teens die by suicide every year. Among 15-to-24 year olds, suicide is the third leading cause of death; for 5-to-14-year-olds, it’s the sixth leading cause of death. (For more statistics and information, see this Facts Guide.)

When they are experiencing suicidal thoughts (sometimes called “suicidal ideation”), tweens and teens usually don’t reach out; they don’t want to see that fearful expression on an adult’s face or for an adult to accuse them of being overdramatic and attention-seeking. If someone in that age group is struggling, the person they’ll usually reach out to is usually a close friend, because that’s where they think the comfort will be. When I reached out and was treated poorly, it only worsened the stigma and invoked a fear that made me reluctant to reach out again. No one should ever be made to feel crazy or toxic for saying they don’t want to be alive – they should be listened to and people who care about them should make sure they get help.

Two years ago, I was a lonely high-school junior who wasn’t entirely sure if I’d make it through the final years of high school; now, I’m a relatively happy college sophomore who has a great network of family and friends. Don’t get me wrong, it’s still hard sometimes to live with mental illness, but the difficulties now aren’t debilitating. They don’t stop my life, or God forbid end it.

If you ever find yourself in the position where a friend reaches out for help, whether they’re expressing suicidal thoughts or a need for emotional support, treat them with compassion and kindness. Asking for help takes courage, so that person deserves to be treated like the brave, bad-ass, dope person he or she is. For me, it’s been an uphill battle, but I think the hill’s finally leveling out. Let’s hope.

for more information about suicide prevention and awareness, visit NAMI. 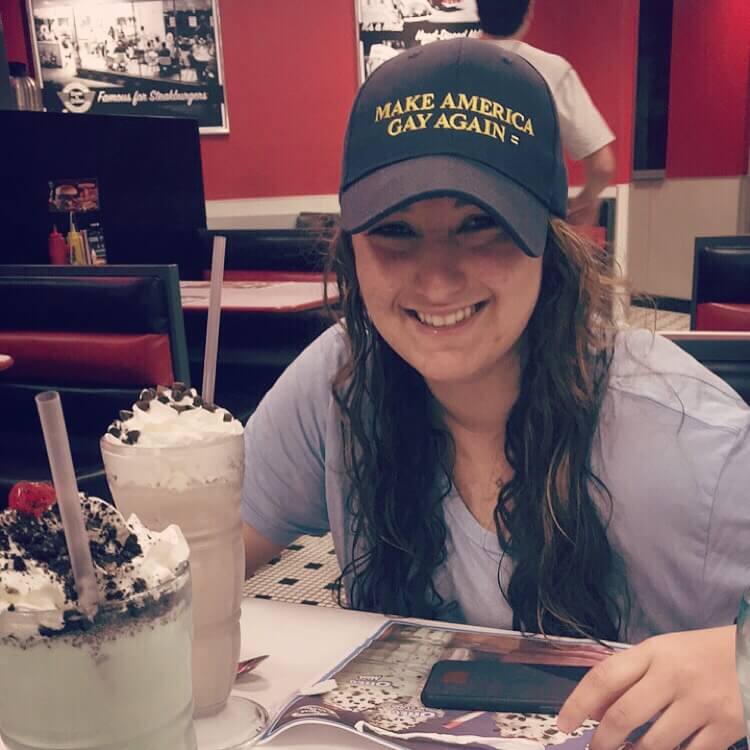 Erica Snyder is an aspiring screenwriter studying Dramatic Writing at NYU Tisch School of the Arts. She is published in many online publications including Cosmoplitan.com and Seventeenmag.com. In her spare time, she enjoys “normal” teenage activities — hanging out with friends, drinking milkshakes, and binge-watching Netflix.