About twice a year, I used to give blood, sometimes at office blood drives, and sometimes heading over to nearby Cedars-Sinai Medical Center to their Blood Donor Services Department. It didn’t take that long, I usually didn’t pass out and they also gave me free movie tickets. In February of 2014, I entered their Valentine’s Day raffle and won a package of valuable prizes including a fancy dinner in Beverly Hills, a free Quizno’s sub, a t-shirt and additional movie tickets. It was pretty much the best Valentine’s Day I ever had.

One day, I was giving blood at Cedars and the phlebotomist (that means the person who draws your blood) said to me, “your platelet count is very high.” While my nervous inner hypochondriac worried if that meant I was dying, he explained that my high platelet count was a good thing: it meant I was an excellent candidate for platelet donation.

Platelets are small, disc-shaped blood cells that help control bleeding by aiding with the clotting process. Platelets are vital in daily hospital life, especially for cancer and surgery patients, and for women after childbirth. With an expiration date of five days, they’re basically the blood equivalent of a flash mob or a pop-up store. People can donate two or three units of platelets every seven days up to 24 times a year, while whole blood donors need to wait 56 days (eight weeks) between donations. Platelet donation takes longer, 1.5-3 hours depending on blood flow, paperwork, and whether you’ve chosen to donate two or three units.

While discussions of organ donation made me squeamish, I found the platelet donation concept fascinating. I didn’t have a lot of money to donate to charity. But this donation I could do.

As I had done with my previous whole blood donations, I loaded up on spinach and a hamburger (sorry, Mayim and other vegans!) the night before, and passed the iron test. The paper thermometer under my tongue registered my regular slightly-lower-than-average temperature of 96.7, but I was still good to go. Blood pressure, fine.

The phlebotomist prepared my arm for the procedure, and inserted the (actually kind of large, ouch) needle. I thought good healing thoughts for the eventual recipients of my cells, while the phlebotomist brought me warm compresses to keep my blood warmed and running during the process. My mouth started to tingle, a common side effect of the anticoagulant they used to be able to extract the platelets safely, but a few Tums (with their calcium) stopped that fairly quickly. Internet access made Amazon Prime Video possible, and with episodes of Veep and Transparent keeping me company, the minutes flew by. 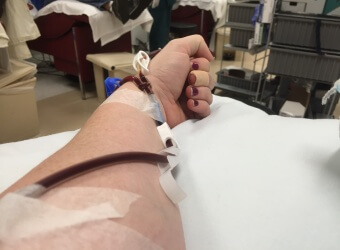 I watched my blood pump out, red in the tubes, and through an apheresis machine; the red cells and most of the plasma came back to me, while the platelets made their way through a different tube to a bag inside the machine. When they pulled the bag of platelets from the machine, they looked not unlike yellow lentil hummus, but an entirely different consistency that seemed more dynamic and alive than most people would prefer in a hummus.

Last time I went, my platelet count was higher than ever – I’d gone from 325,000 to 375,000. Maybe my body had grown to expect I’d be donating again and was overproducing platelets like you do when you’re making cookies and expecting company. “Why, of course there’s enough to share! Just pull up a chair and find a vein…”

We mostly go to hospitals when there’s something really wrong. But here was a good reason to visit the hospital, to contribute to the work that doctors and nurses do, to help by providing something of myself without knowing who will receive the help. An act like this is high on the hierarchy of helping others according to Jewish thinker and doctor Maimonides. This is a chance to know that a part of me, albeit small and undetectable in that person’s personality or daily life, is living elsewhere. It’s selfish really – in a world where illness and natural disasters and random acts and butterfly effects can snatch people away from us in an instant, I’m creating my invisible legacy – that no one is celebrating it at a gala or with a plaque on a wall doesn’t make it any less important to me, and probably to them.

With platelet donation, I give something of my physical self to help heal or extend life in other people. That I don’t know who they are doesn’t matter. But that there’s something physical on a molecular level that connects me to other humans walking around in this city and in this world does matter, because it helps me feel more connected to humanity as a whole.