Today is Israel Independence Day. Known in Hebrew as Yom Ha’atzmaut, the holiday is one of national celebration for Israelis living in the tiny country as well as abroad. Ha’atzmaut comes from the word atzma’i, meaning “independent,” or poetically, “of the self,” but containing the root of  “etzem,” which means “bone” or “the core essence of.” Israel’s modern atzamot, Israel’s modern bones, are 70 this year; its ancient ones are much older.

But 70 is not so old. Billy Crystal, Prince Charles, Bernadette Peters, Cat Stevens–all born in 1948 –are or will be 70 this year. Carl Reiner, Stan Lee and Betty White are all in their 90s and we hope they live forever. 70 is young. Especially for a country.

Israeli Independence Day commemorates Israel’s declaration of independence from the British mandate on the 5th of the Hebrew month of Iyar: May 14, 1948. Another year, May 14 was the day my mother died. 70 is an age my late mother, who was born on May 1, 1945–the first day after the death of Hitler–never got to be. In the Jewish tradition, 70 is considered the age of wisdom. 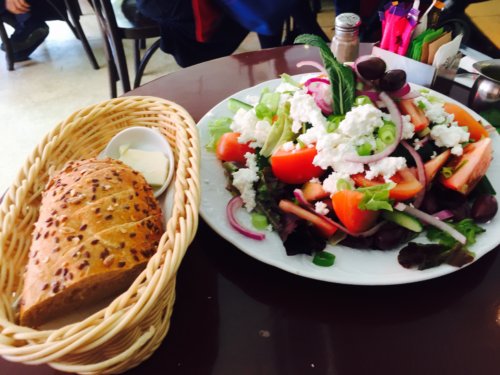 Israel, like the Jewish mother I had, you have, had or could have had, will make sure you are fed. With fresh and vibrant produce, local delicacies and the best of world cuisine, food in Israel is fresh and abundant. The marketplaces are a feast for the eyes and a stimulation for the other senses. And the diversity of Israel’s population is reflected on the nation’s plates. If no other religion draws you to Jerusalem or Tel Aviv or the Galilee or Israel’s many cities and historical sites, you can have faith in food.

Even the word Israel provokes a response that is emotional. Whether you have a religious connection–and practitioners of three major religions do–or a political, family or historical connection, Israel isn’t the vanilla ice cream of countries. It’s closer to a rum raisin or mixed sherbert or some other flavor that’s more controversial. But whether they’re proudly “pro” or vocally “con” or afraid to voice their opinions, people feel strongly about it.

Israel is a democracy or a theocracy, depending who you ask. A small space that thrives in a desert becoming a startup nation, a country that through force of will and support from abroad, willed itself into existence after so many were exterminated during the Holocaust. Some link the founding of Israel directly to that globally visible suffering, while others believe that Israel was separate from whatever tragedy may have come before, the fulfillment of a biblical prophecy. Still others may deny the existence of the very modern state they live in: they are waiting for God to fulfill the prophecy and build a third Temple in Jerusalem. Israel contains all of these people, and more.

The day before the great celebration of Yom Ha’atzmaut is a day of remembrance: Yom Hazikaron, a memorial day for those who fell forging and defending the state of Israel. Because Israel is small and everyone serves their country in some way, through army service or national community service, there is no family that has not been touched by loss. They feel the national memorial day keenly, in their homes and in their atzamot, in their bones. As they stand still during a siren that sounds throughout the country, they remember their losses and honor a space of grief and sadness before transitioning into celebration.

This year, Israel’s national celebration included a special performance orchestrated by Koolulam–a social-musical initiative aimed at bringing together people from all corners of Israel’s multi-cultural society. Listening to 12,000 voices singing “Al Kol Eleh” (For All of These Things)–a song that prays for blessing on everything, whether it’s bitterness or sweetness–is a taste of complicated Israel.

This song and its celebration are symbolic of what makes Israel “Israel.” They remember what they’ve lost and emerge from it ready to celebrate what they’ve gained. They gather to sing about honey and thorns, and yearn for it all to be blessed. What may seem like a small effort contains many different voices. In singing together, people bring their different clothes, accents, faiths, keys and octaves to a shared space. The harmonies may not always work, but even in the discordant spaces, there’s a vital rhythm. The heartbeat of Israel, 70 years young, 70 years wise, 70 years here with more to learn, do and say. The world is listening.

For more about Yom Ha’atzmaut, check out this video from our friends at BimBam: