“Does India have a sky?”

In the ’80s, as a young girl in a small Texas school, many of my classmates were unfamiliar with the country of my heritage and often thought of it as an “alien” place. This was one of the questions I had to answer after I returned from a summer visit to Bombay.

Other questions focused on where Indians shopped for food, how “they” dressed, and whether “they” could survive on a vegetarian diet.

“We aren’t another species,” was my response, “…just a different culture.” The tone of my voice bounced with confidence, but the shame of being cast as an outsider stung.

In school hallways, football coaches attempted to convince me to “fit-in,” by trying a piece of steak, and some classmates insisted that if I attended a church service, I’d immediately abandon Hinduism and convert to Christianity. I laughed to disguise my anxiety and explained eating meat violated one of the precepts of my religion and “switching” my faith would likely not land well with my parents.

I led a double life.

My first-generation Indian immigrant parents insisted on preserving their culture, to balance the fact that my birth took place in a small Presbyterian hospital in Dallas, Texas. At school I’d recite Shakespeare’s To Be or Not to Be, while at home, my father mandated that I speak to him in our native tongue, Gujarati. In our kitchen, my mom slathered butter on a hot roti, a traditional bread dipped in curry, though during lunch at school, I took careful bites out of my peanut-butter and jelly sandwich. On Sundays, my family and I attended an evening religious service at the local Hare Krishna temple, chanting “Hare Rama, Hare Krishna,” dressed in our colorful saris and shimmery bangles, while during weekday afternoons, I gathered with my friends to organize an event for Student Council or congregated outside to talk about the latest TV show or my plans for the weekend.

Vacillating between my Indian identity and my American upbringing morphed into a place of insecurity, and as a teenager, the ambivalence announced itself in unexpected ways. If I had an intricate mendhi design on the palm of my hands, I scrubbed my skin with force, enough to turn natural pink to peeling, rough red. I purposefully did what I could to avoid questions about my culture, because the American part of me craved acceptance.

I told my parents never to speak in Indian on campus and instructed my mom to not wear a big red dot on her forehead when she picked me up from school. At home, though, an expectation existed—we’d celebrate all significant Indian holidays, with a keen emphasis on Diwali, the Indian festival of lights. We’d wake early, the saffron and cinnamon mixing in the air, my mom cooking kheer and other sweets to commemorate the holiday, while my father sat cross-legged in front of the makeshift temple in our kitchen chanting various mantras. The day began with “Happy Diwali,” and several family and friends called to wish us good tidings.

In India, Diwali is observed as a national holiday, where children are not required to attend school and many businesses are closed for the day. This festival of lights is a symbolic representation of light prevailing over darkness. Candles and oil lamps are lit to honor the holiday while families and friends gather to enjoy dinner together, and nighttime fireworks provide a glow in the sky.

During the eighties, this fanfare did not exist in Texas. I struggled with explaining Diwali, telling my classmates that it is the Hindu version of Christmas. Puzzled looks clouded their faces and it led to a discussion of why the Indian calendar is only 11 months long instead of 12.

Almost 30 years later, Diwali is viewed under a different lens. 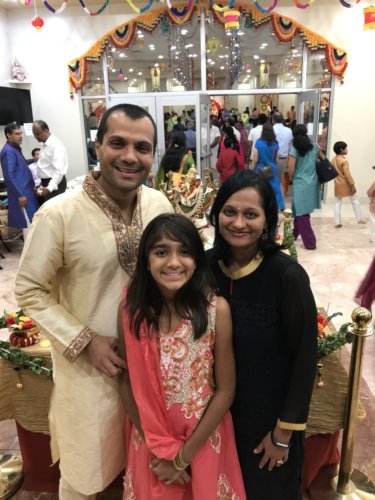 Rudri and her family at a Diwali celebration

Although it is not a nationally observed holiday in the United States, there is an increasing awareness of Diwali’s importance. Many large cities, like Chicago, New York, and Dallas hold weekend festivals commemorating the holiday. Private schools allow children to wear traditional Indian clothes to class, and parents educate others by conveying what Diwali means, passing out sweets, and answering questions about Indian culture. In Disneyland and Times Square, public celebrations are held with performers dancing and thousands of people in attendance.

For my 12-year-old daughter and this generation of Indian-American kids, there is an inherent freedom in embracing our heritage. In the last two decades, Diwali has enjoyed a mainstream recognition in America, with several presidents, from George Bush, Sr. to Bill Clinton and Barack Obama, hosting ceremonies in the White House. The press generously covers Diwali celebrations across the globe, offering an education to those who are unfamiliar with the holiday.

This new paradigm shift is a contrast to my experience with Diwali as a pre-teen and teenager. The shame I once felt has given way to the freedom in celebrating Diwali. I openly talk to non-Indian friends about the holiday and educate them regarding its significance. There isn’t the need to satiate a person’s curiosity with a one-liner, but to engage in a discussion about how we celebrate. The last few Diwalis, non-Indian friends have texted me a “Happy Diwali,” or call me to extend their wishes. This recent narrative offers the texture of tolerance and recognizes the capacity of people to appreciate another’s culture. This new openness is comforting and replaces the angst I felt in my childhood. It is empowering to raise my daughter in a place of cultural awareness.

This year, my daughter will dance in a Diwali performance in Arizona. She will don her traditional Indian outfit, the sparkly bindhi will glow when it catches light, and she will move her arms and legs to the pulse of the music. The American and Indian flags will likely stand side-by-side at the corner of the stage and the meaning will not be lost on me. Yes, India shares the same sky as America, I will say under my breath.